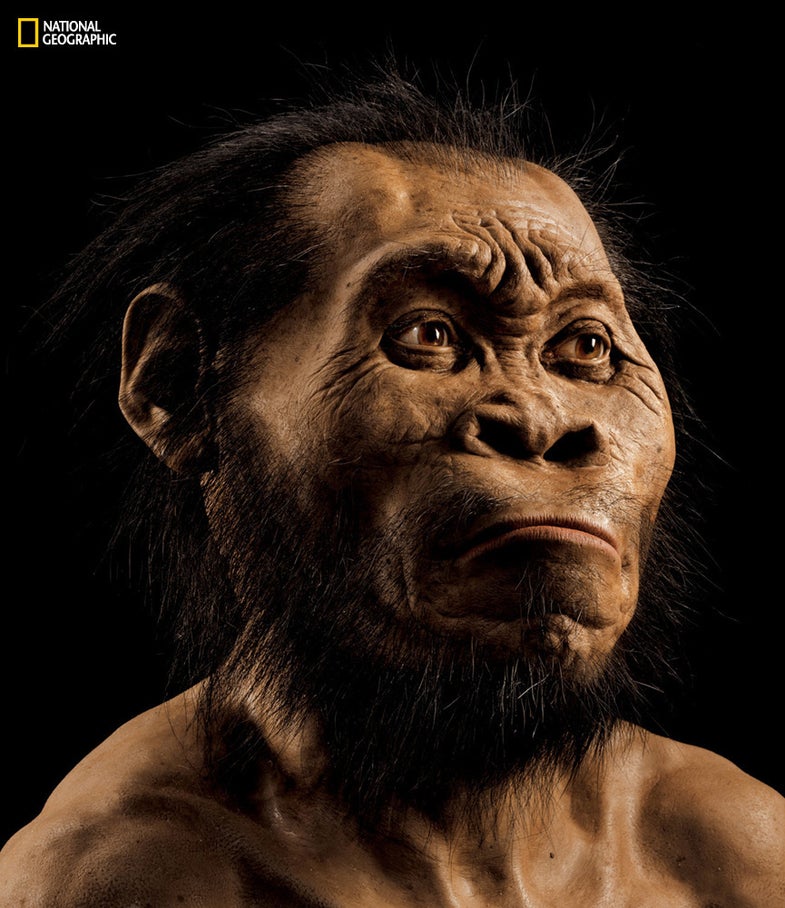 In September 2013, two cave explorers on a routine exploration in South Africa happened upon a collection of fossils that would soon question our current understanding of humans’ ancestral history. While probing a narrow fracture system in the Rising Star Cave System in the Cradle of Humankind World Heritage Site, they found the entrance into a dark cave now known as Dinaledi Chamber. Inside, they discovered a series of fossils, which anthropologists have now identified as a species of hominin distinct from those that make up our family tree — a human ancestor entirely new to science.

Lee Berger, an anthropologist at the University of Witwatersrand in South Africa and lead author of the study, in collaboration with the National Geographic Society and South African Department of Science and Technology announced their findings today in the open access journal, eLife, and in an article in the October issue of National Geographic Magazine.

The new species, named Homo naledi after the Rising Star Cave where it was found (naleti means star in Sesotho, a local South African language), has an unusual combination of features found in the genus Homo (which includes modern humans, Neanderthals, and other extinct species such as homo erectus) and in the genus Australopithecus (from which the homo genus is derived).

Researchers are still figuring out where the species fits within our human lineage, however the striking combination of both Homo and Australopithecus-like physical features makes it quite possible that this new species was near the initial origin and diversification of the homo genus, placing it between 2.5 million and 2.8 million years old, the researchers said during a press conference.

After a series of two excavation trips, the researchers recovered 1,550 separate bone and bone fragments and, in total, remains of at least 15 distinct individuals with ranges from young infants to old adults. The sheer massive number of fossils found, the researchers said, allowed them to be more certain that this is indeed a new species, and not simply a collection of bones from two different, known species. They analyzed every anatomical feature —skull, hands, feet, teeth, etc. — separately, using specialized teams working independently. Each team came to the same conclusion: the features came from the same species, and thus collectively, the fossils as a whole must belong to the same species.

Entering the Dinaledi Chamber, where the fossils were found, is an incredibly tough task as it requires traveling through a series of narrow openings and tunnels in the pitch dark. Once there the cave is just 12 meters in length and anywhere between a half meter and two and a half meters in width. The roof reaches heights of about 32 feet to 50 feet (10 to 15 meters).

The fact that such a massive number of the same species was discovered within the difficult-to-reach Dinaledi Chamber makes the researchers believe that the Homo naledi were using this location as a kind of mass grave — depositing bodies repeatedly en masse over time.

The researchers could only find one way to reach the chamber, and they saw no indication of other animals, nor any evidence it was used as a dwelling. Fossil parts were found in different layers of the sediment, which suggests that the fossils entered the chamber at different periods of time, and making it less likely that they all died from a single catastrophic event. Previously, this type of ritualized dumping procedure was thought to be unique to humans only, the researchers said.

Who Is Homo naledi?

Based on the fossils they have currently studied, the researchers believe that H. naledi stood at about 5 feet tall and weighed almost 100 pounds. But as a whole, H. naledi represents an unexpected combination of Australopith-like and human-like features. In particular, they appear to have had small brains, which more closely compares to that of the australopiths. However the shape of the skull is more similar to that of early species of our homo genus

Their hands also have a combination of traits that exist in two different known species. To make this discovery, the researchers were able to find bones in the hand that were partially joined together, which is an extreme rarity in the hominin fossil record, along with a hand skeleton that was nearly complete. The wrist bones show several adaptations that allowed the species to use tools and are also seen in the hands of modern humans and Neanderthals.

However, the fingers of Homo naledi are more curved than even most australopiths. This suggests that while Homo naledi did walk, they also probably spent a significant amount of their time climbing. Their feet help to confirm this hypothesis as they were slightly more curved and had a lower arch than the average human. This finding sheds some light on a constant debate among anthropologists as to whether early hominins exclusively walked or did indeed spend a significant amount of their time climbing trees.

The small size of Homo naledi‘s brain also stood out. Previously, anthropologists believed that a larger brain size emerged together with tool use, and in conjunction with smaller tooth size and a higher quality diet. The Homo naledi did have small teeth and hands effective for tool-making, but they also had a small brain. The researchers said this distinction has caused them to rethink their present models of when traits evolved and how, and poses the possibility that they didn’t evolve “as a single adaptive package,” the researchers write.

While much information has already been gained from the Homo naledi remains, the fossils have not yet been firmly dated.

However, they point out that that date would not significantly affect their working hypothesis as to where Homo naledi lies on the ancestral tree. That hypothesis was determined through the physical features of the newly identified species, and comparing them to prior fossil discoveries of close ancestors, as well as modern humans.

Once a more exact age of Homo naledi is established, they will use this as a guide for future studies to interpret the South African archaeological record, and determine who exactly made various stone tools and what anatomical features were necessary to make them, the researchers said.

For now, this new discovery perhaps serves as a reminder that the answers to our burning questions about the evolution of our species and that of our most recent and distant cousins may lie in hidden caves like Dinaledi, simply waiting to be discovered. At the same time, the ambiguities within them may likely open up new questions that will continue to puzzle and challenge our understanding of our own kind.