The tropical insects' gliders are a warning signal to predators. 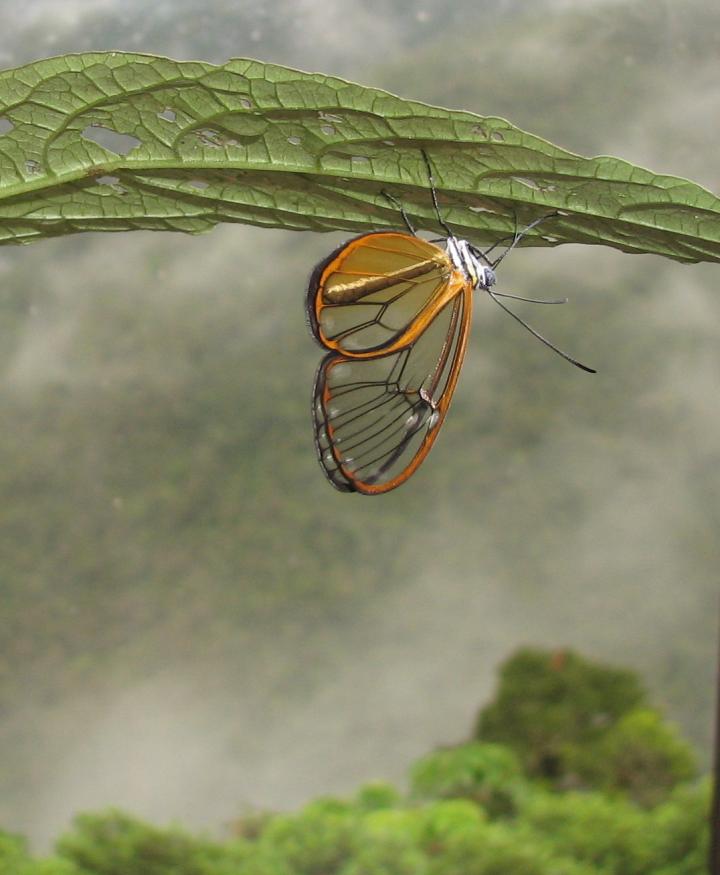 This clearwing butterfly is now a prizewinner. Marianne Elias
SHARE

Finding a clearwing butterfly isn’t difficult, says Marianne Elias, so long as you’re 6,000 feet up in the mountains of Ecuador. There, in the densely-foliated tropics, several species of transparent Lepidoptera live a seemingly tranquil life of beauty. But the paradisal scene is dependent on a bitter secret lurking in the critter’s window-like wings.

“Those butterflies are toxic butterflies,” says Elias, an expert in biodiversity at the Muséum National d’Histoire Naturelle in Paris. Instead of the colorful hairs that make up typical wings, these see-through gliders are full of alkaloids, which lend them an astringent taste. Knowing the acrid meal that awaits them, predators, whether other insects, birds, or even monkeys, are unlikely to take a bite.

Elias captured this particular image on a trip to South America’s western coast, where she and several other scientists studied the butterflies in their natural habitat. Their research, which looks at the evolution and ecological niche of several related species, was published in the journal Functional Ecology in February. Friday, Elias’s photo of the well-named Hypomenitis enigma was named the first place winner of the BMC Ecology Image Competition.

Its transparency comes from the shape of its wing scales, which work like anti-reflectors, allowing more light to travel through the wing. Snapping this shot was no big deal, Elias tells me over the phone. The species “is pretty abundant, so it’s actually quite easy to see flying around.” Unraveling the biological mystery inside the picture has proven more challenging.

Evolutionary theory would suggest that all clearwing butterfly species would develop similar coloring so predators could “learn to associate the bad taste with a given color pattern,” Elias says. But in reality, each group has very distinct markings—some have brown frames, others black and white, still others orange or red.

Upon careful observation, the researchers developed a hypothesis. “There is ecological segregation of the butterfly species, so some fly in the canopy, others in the understory, others in the more open area,” Elias says. “If predators in those micro-habitats are different, then a diversity of color patterns could be maintained.” Experimental models are needed to confirm this concept, but it builds on previous research of highly-specialized ecological niches across the animal kingdom.

Equally confounding is the butterfly’s mix-and-match construction. “Usually, toxic species have very bright, conspicuous color patterns,” Elias says. Dart frogs, which secrete a toxin through their skin, are entirely covered in police-tape yellow or stop-sign red. Transparent animals, meanwhile, typically go all in on their disappearing act. The butterflies seen here are doing both, like an invisibility cloak whose trim didn’t quite get the memo.

But Elias’s team developed a hypothesis for this, too. “We think those species are making the best of both worlds,” she says. “By being less detectable, they’re less likely to be found by a predator. But by offering this coloring pattern, they’re able to communicate they are toxic.”