They need more creative titles than P4 and P5. 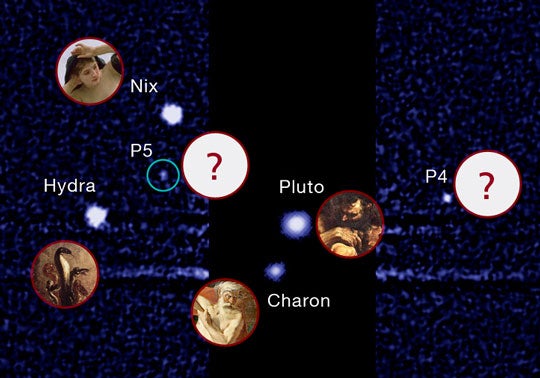 Back in 2011, the Hubble Space Telescope was pointed at Pluto to help astronomers prepare for an upcoming spacecraft visit, and it spotted a tiny object nearby the non-planet. It was a moon, and turned out to be one of two tiny companions previously unknown to science. They were unceremoniously named P4 and P5, and nobody ever gave them better names. Now’s your chance!

The SETI Institute, whose astronomers helped make the discovery, is looking for nomenclature nominations. The moons have to be assigned names that are derived from Greek or Roman mythology, like the other planets. Vote at this new website, PlutoRocks, and the astronomers will choose winners based on the vote tallies.

Typically, moons are associated with the mythological god for which their planets are named. For instance, the Martian moons Phobos and Deimos are named for the sons of Ares, the God of War. Mars is Ares’ Roman counterpart. Pluto’s other three moons, Charon, Nix and Hydra, are affiliated with Hades and the underworld just like Pluto. You can vote on existing possibilities or write in your own suggestion.

P5 was discovered about a year after P4, when astronomers went looking for other previously unseen objects around the distant world. Both moons have estimated diameters of 15 to 20 miles. That means the telescopes saw something the size of a city from a distance of more than 3 billion miles.

Voting ends Feb. 25, and the final names will be announced after their formal approval by the International Astronomical Union.