There’s Salt Water On The Surface Of Europa, Which Could Be Good News For Extraterrestrial Life

The moon's thick ocean may derive energy from chemicals donated by nearby Io. 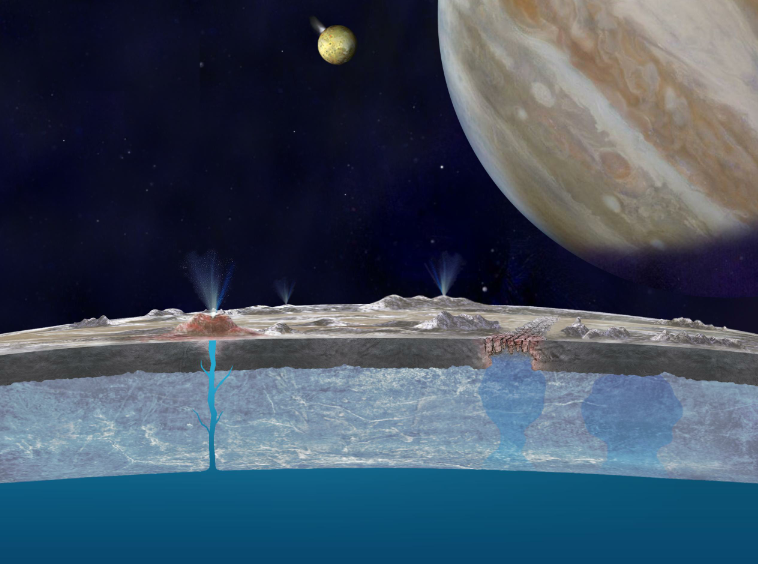 Based on new evidence from Jupiter's moon Europa, astronomers hypothesize that chloride salts bubble up from the icy moon's global liquid ocean and reach the frozen surface, where they are bombarded with sulfur from volcanoes on Jupiter's largest moon, Io. NASA/JPL-Caltech
SHARE

Scientists are pretty confident Europa is home to a vast subterranean ocean, but could it have any water on its surface? According to a new study, maybe yes. That’s big news for anyone hoping to send a robotic explorer to the icy moon. And it could be big news for anyone interested in the possibility of life on that Jovian satellite.

Salty water from Europa’s 60-mile-thick ocean makes its way to the surface somehow through cracks in its ice sheet, according to new research. Once it’s there, it is exposed to sulfur from the neighboring moon Io, Jupiter’s largest. Magnesium chloride in the water interacts with the sulfur and produces magnesium sulfate, according to an analysis by astronomers Mike Brown of Caltech and Kevin Hand of the Jet Propulsion Laboratory.

Brown and Hand looked at spectrometer data from the Keck II Telescope on Mauna Kea and noticed a signal that looked like a form of magnesium sulfate, called epsomite. Then, in Hand’s lab, they tested various salts and other chemicals to compare signals–they looked at everything from table salt to Drano, according to JPL. The signals matched magnesium sulfate.

This is interesting because it shows that Europa has some kind of chemical activity and energy transfer at its surface, the astronomers note in a new paper. That’s important for life-hunters because any alien creatures living on the frigid moon would need an energy source–the sun is far too dim at that distance to really do anything.

This is also important for possible future visits, because it means scientists could sample Europa’s ocean without having to drill through its ice sheet. The new paper was accepted for publication in the Astronomical Journal.