Frigid Pluto may have had a toasty start

Cracks on the dwarf planet’s icy surface suggest it was warm enough to host a liquid ocean early in its history. 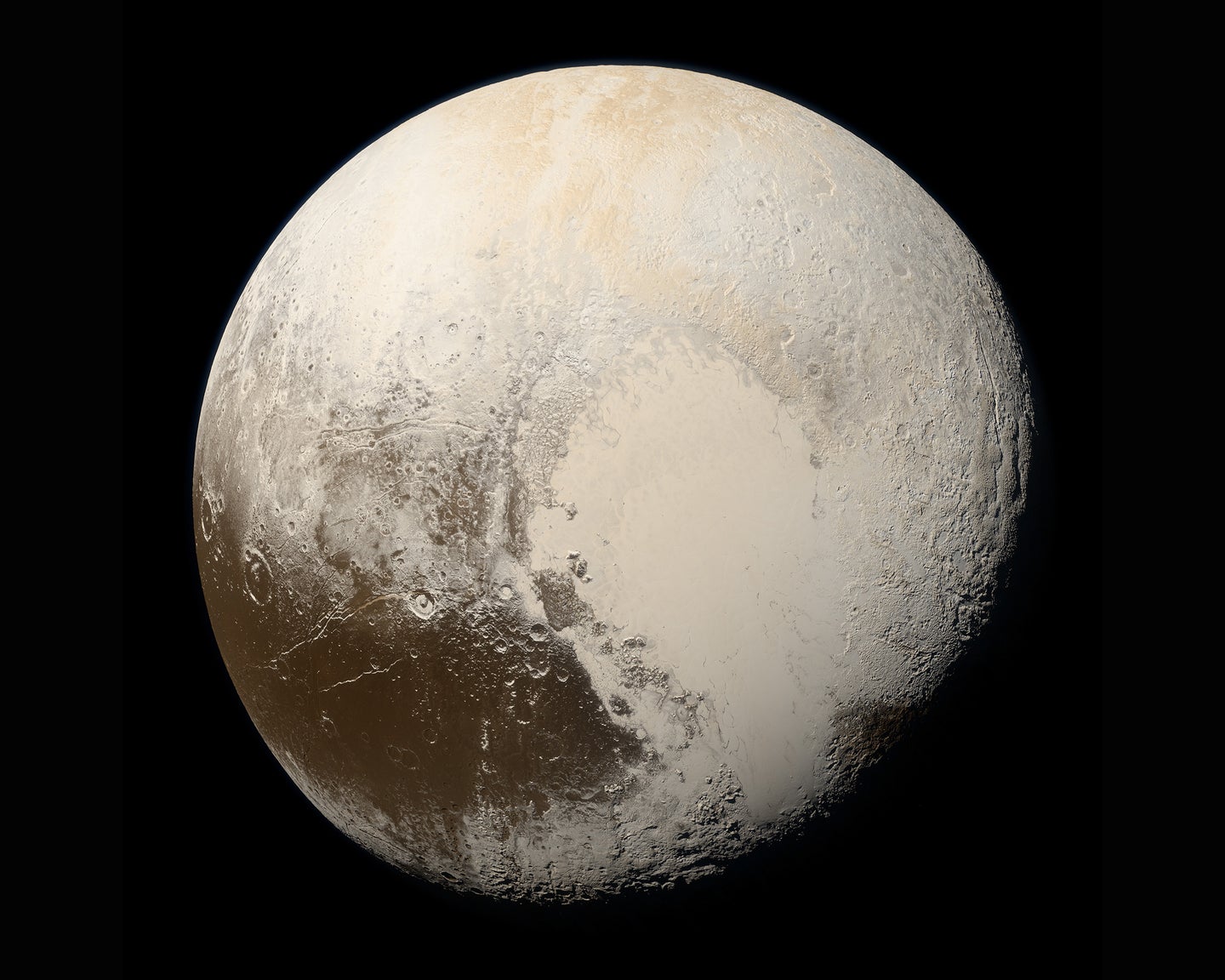 Scientists propose that, rather than being chilly from the start, Pluto enjoyed a relatively balmy period early on in its history. NASA/Johns Hopkins University Applied Physics Laboratory/Southwest Research Institute/Alex Parker
SHARE

Today, the dwarf planet Pluto is a frigid world with surface temperatures below -370 degrees Fahrenheit. But Pluto was a very different place when it formed several billion years ago. In a study published on June 22 in the journal Nature Geoscience, scientists propose that, rather than being chilly from the start, Pluto enjoyed a relatively balmy period. This would mean that Pluto’s liquid ocean, which is locked under an icy shell tens to hundreds of miles thick, appeared early on in its development.

The new findings have far-reaching implications, says Steven Desch, an astrophysicist at Arizona State University in Tempe who was not involved with the research. “Until [around] 20 years ago, everyone’s perception of the Kuiper belt was that it would be filled with very cold objects that are barely more than comets and that these would have been in a pristine state since the beginning of the solar system…it was just thought to be frozen and dead for all time,” he says. The new findings offer a more dynamic picture of Pluto and its neighbors. “We’re beginning to see how planets generally grow and how fast things happened in the outer solar system for the first time.”

On July 14, 2015, NASA’s New Horizons became the first spacecraft to explore Pluto up close. New Horizons flew about 4,800 miles above Pluto’s surface—close enough to snap detailed pictures of the dwarf planet. These images revealed long faults in Pluto’s icy shell that can offer clues about its history.

“The main goal of this work was to try and figure out, what can we learn about how Pluto formed from the geology that we see on the surface today?” says Carver Bierson, a planetary scientist at the University of California, Santa Cruz and coauthor of the new findings. “We thought about how Pluto’s evolution over solar system history would have been different depending on how it started out.”

He and his colleagues ran computer simulations of how Pluto’s ocean would have changed over time under two different scenarios. Generally, researchers have envisioned Pluto starting out as a frozen mixture of rock and ice. Over time, heat from the radioactive decay of elements in the dwarf planet’s core would have enabled a liquid ocean to form below the surface ice.

“As the ice was melting, Pluto would have been contracting and compressing,” Bierson says. But if Pluto had initially been cold, he says, these forces would have been unlikely to create the surface features captured in the pictures from New Horizons. “On Pluto we see lots of very wide cracks where it looks like the ground is essentially being pulled apart.”

More plausible, Bierson and his team surmise, is a scenario in which Pluto formed over a mere 30,000 years as rocks, just a few inches wide and drawn in towards the planet by its own gravity, pelted the nascent world’s surface. “Impacts in general are like explosions; they release a lot of energy [and] that’s going to warm up that nearby area,” Bierson says. “If Pluto formed quickly you would have impact on top of impact on top of impact, and you’d keep warming up that same area over and over again until you can start to melt the ice.”

The temperature of this water would probably have remained just above freezing, the researchers theorize, a bit like the Antarctic subglacial lakes on Earth that are covered in ice year-round. Eventually, as Pluto cooled, some of the water beneath its icy cap would have frozen. As it froze the water would have expanded—similarly to how a water bottle will swell and even crack if you leave it in the freezer long enough.

“This hot start is the more likely scenario; it looks like Pluto has been expanding throughout solar system history,” Bierson says. However, he added, New Horizons was only able to capture around a quarter of Pluto’s surface in detail as it whizzed past. So the tectonic features scientists have seen may not be representative of the dwarf planet’s entire surface.

But if Pluto did have a toasty start, it’s likely that many other objects in the Kuiper belt—the ring of icy bodies beyond Neptune’s orbit—formed similarly and may also have developed liquid oceans fairly quickly. This process would have influenced whether these bodies could ever have been habitable to life; over time, the liquid ocean would have interacted chemically with the rocks beneath it. Whether this could have created the right chemical ingredients for life is an open question, though.

“[Pluto’s history] gives us now another place to think about the kinds of environments that life might exist in,” Bierson says. “But we need to learn more about what it actually takes to develop and sustain life to really say how likely it is that Pluto would have ever had its own life.”