RASSOR drops the scientific instruments of its cousins for 100 pounds of durability. 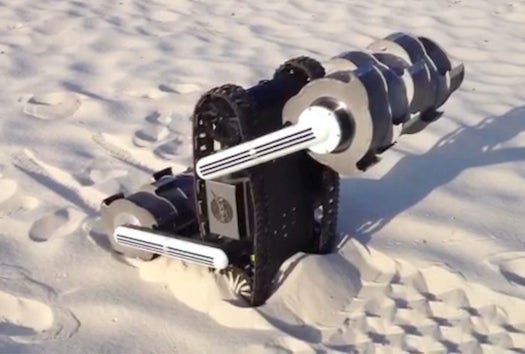 Meet RASSOR, NASA’s newest mini-space explorer. What you’re looking at is a prototype. But one day, NASA plans to send something similar to moon.

RASSOR–pronounced “razer” and short for Regolith Advanced Surface Systems Operations Robot–checks in at 2.5 feet tall and looks a little bulkier than past generations of rovers. That’s by design, NASA says: The robot is built to work through the day, and to last for years doing it.

The job at hand: collecting resources. RASSOR will be tasked with digging up lunar soil and dumping it back into another machine on the moon’s surface. That second machine then separates water and ice from detritus to make breathable air or rocket fuel. Usually, a significant portion of a rocket’s mass is fuel. So if NASA can make fuel on-site with help from RASSOR, it’ll mean NASA can send a lot more cargo on the mission. The same process could work on Mars, too.

Not that it’s an easy job for RASSOR. Even speeding along at up to 20 centimeters per second–five times Curiosity’s top speed–and grabbing about 40 pounds of soil at a time, it’ll need to operate 16 hours a day for five years to harvest enough soil for the mission. (Poor guy.) RASSOR itself will weigh about 100 pounds.

One step closer to a fully sustainable lunar base? Maybe! Either way, RASSOR won’t be in action for a while. A RASSOR 2 is already being developed, but won’t start testing until early 2014.