Neptune Has A New Moon. What Will We Call It?

Naming things in space can get political. 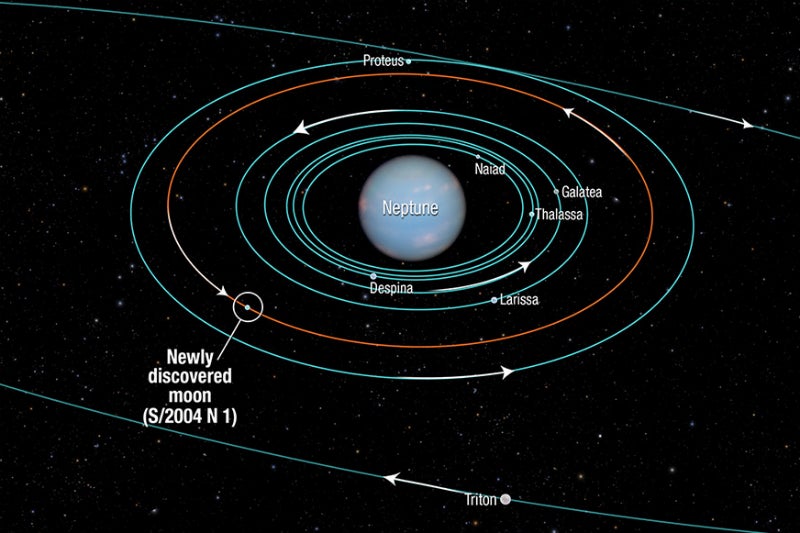 Earlier today, NASA announced the Hubble Space Telescope has discovered a brand new moon in the solar system, a dim satellite only 12 miles across, orbiting Neptune. As with any newborn, it needs a name. How will astronomers decide what to call it?

Right now, the moon’s tag is S/2004 N1. It’s a bit of a mouthful to toss out in casual conversation, but it signifies that it’s the first satellite discovered in 2004 around Neptune. (Though only identified this month, the moon was discovered through archival images of Neptune taken by Hubble between 2004 and 2009.)

Eventually, N1 will have a more noble title bestowed on it, probably something plucked from classical mythology.

The discoverer of the moon gets to suggest a name, but the final say on moon-naming goes to the International Astronomical Union (IAU), a group of astronomers first called together in 1919 to bring order to the chaos of celestial nomenclature. Usually a natural satellite’s name is somehow related to that of the planet it orbits. Jupiter, for instance, has moons that are named after the god’s lovers.

Just a few weeks ago, the latest moons discovered hanging out with dwarf planet Pluto got a moniker upgrade of their own. Formerly known as P4 and P5, the moons, discovered in 2011 and 2012, have now become Kerberos and Styx, named for two figures of the underworld in Greek mythology.

The IAU put its foot down when it came to naming one of them Vulcan–the most popular name in a Trekkie-centric public poll–because it already refers to a planet once proposed to exist between Mercury and the Sun. Plus, it deviated from the underworld theme Pluto had going on.

N1 was found by the SETI Institute’s Mark Showalter, the same astronomer that discovered Kerberos and Styx and opened up their names to public polling. NASA hasn’t announced whether we’ll get the same opportunity with this new moon. At this rate, it even might be a year or two before N1 gets a fun new name. Start digging up obscure, Neptune-related myths!