FYI: How Do Places On Mars Get Their Names? 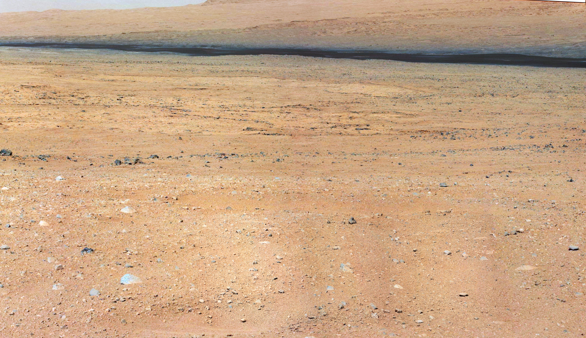 The Mars rover Curiosity shot this image on its way to Glenelg, an area in Gale Crater where three types of geologic formations converge. NASA/JPL-Caltech/Malin Space Science Systems
SHARE

This week, the Mars rover Curiosity is humming its way across the pebbly surface of Yellowknife, leaving behind Peace Vallis and Hottah, and motoring through Gale Crater through a geologic region called Glenelg. Like every other major feature on Mars, all the names of all these places were carefully chosen, suggested to an international consortium of scientists, formally selected and then officially written into the gazetteer. Most places on Mars are named for geologic features on Earth, but sometimes there’s a larger connection–like Glenelg.

On Mars, it’s a confluence of three geologically interesting features, and the first zone for Curiosity to do its science. In Scotland, it’s a tiny hamlet that now finds itself interplanetarily famous.

But who are we to name rocks on another planet? Won’t that annoy the Russians, or someone? It’s actually pretty complicated.

Once scientists obtain the first detailed images of an area on another world, they settle on some themes for the region, according to Joy Crisp, MSL deputy project scientist. These can be official and unofficial; only features above a certain size get an official designation. For Viking, smaller objects of interest were nicknamed after children’s book characters, including Mr. Badger, Mr. Toad and others from “The Wind in the Willows.” For Pathfinder, rocks were named for cartoon characters like Bullwinkle, Garfield, Snoopy and others. And so on for later missions.

“It’s a practical thing to give these names so you can hold discussions,” Crisp said, “instead of, ‘You know the slightly browner rock with a round edge, to the side of that long black rock?’ This way, you can discuss the names and relate what you are finding out about them.”

For littler rocks, sometimes NASA keeps it simple. The famous tweeting rock N165, the first victim of Curiosity’s laser eye, got its moniker because NASA first spotted it with Curiosity’s NavCam–hence the N.

The themes are submitted to the International Astronomical Union’s Working Group for Planetary System Nomenclature, which has subgroups according to the planetary body in question–the moon, Venus, Mercury, Mars, the outer solar system, etc. Then they go by the book.

So: Glenelg. It’s actually named for a site in Canada’s Northwest Territories, as are most of the objects Curiosity has been checking out. Before the rover arrived, its potential landing area was divided into quadrangles one mile on each side, Crisp explained. They were each named for interesting geologic formations, rock outcrops or mineral sites on Earth. Curiosity landed in the Yellowknife quadrangle, which is a city in Canada that serves as a launch pad for geologic expeditions. So everything that warrants a name inside Yellowknife gets a name associated with Yellowknife, Crisp said. The rover team liked the Yellowknife connection because the Northwest Territories are home to ancient, exposed rocks that can provide clues about the early Earth–just like Curiosity is trying to do on Mars. 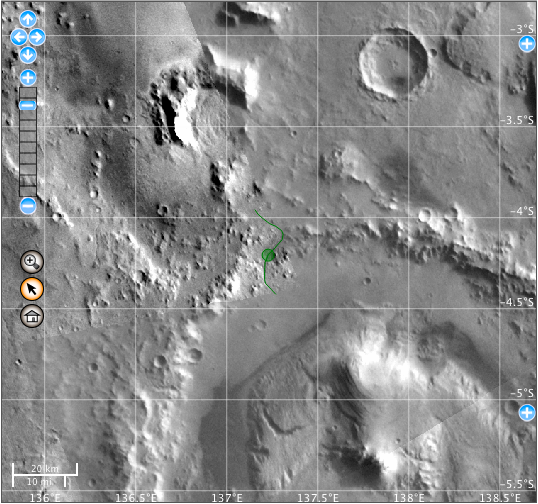 This map shows a newly named hydrological feature on Mars, nicknamed Peace Vallis. It’s named for the Peace River in northern Canada, as are many features where Curiosity is exploring the Red Planet.

The names are vetted at the U.S. Geological Survey, by Ken Tanaka at the Astrogeology Science Center and USGS cartographer Jennifer Blue. Task group members get an email with the suggested names and have a couple weeks to decide.

“Many times the rules are not met, but perhaps a different name can be used. Or the feature does not meet quality standards,” Tanaka said in an email. “In addition, sometimes we find that with improved spacecraft data that existing names need to be modified or even deleted.”

So what about Scotland? Glenelg is an outcrop near Yellowknife, but even NASA liked the Scottish connection enough to talk about it on a Mars science blog. And it probably originates in Scotland, anyway. John Brown, Scotland’s Astronomer Royal, noted that there were probably plenty of Scots who moved to Canada. “Even if that’s not true, there’s the connection in that they are both quite remote places,” he said.

Glenelg is on Scotland’s west coast, near the Isle of Skye, and has just 280 residents, said schoolteacher Johanne MacAskill. “You have to travel over a big mountain pass to get in here, and there is only one way in and one way out. It is quite isolated and quite remote,” said MacAskill, who was also a member of a volunteer committee planning the party.

MacAskill said she hopes the connection creates a lasting memory for the village’s residents–who will also be following the mission and its many discoveries.

“It rains quite a lot here, and they are looking for evidence of there having been water on Mars. We can certainly spare some of that,” she said. 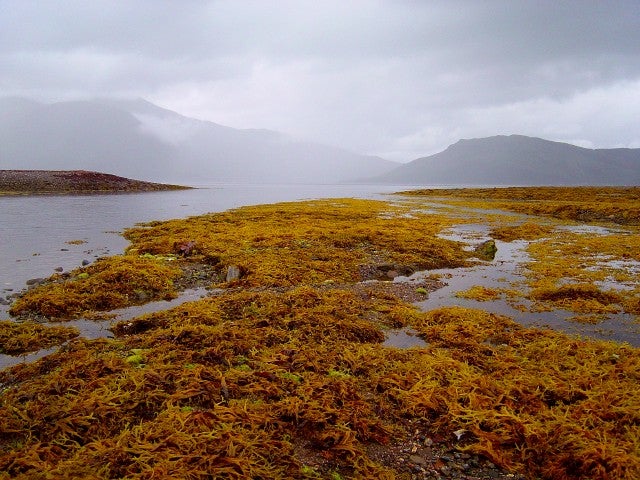