Haulin’ freight on the moon. 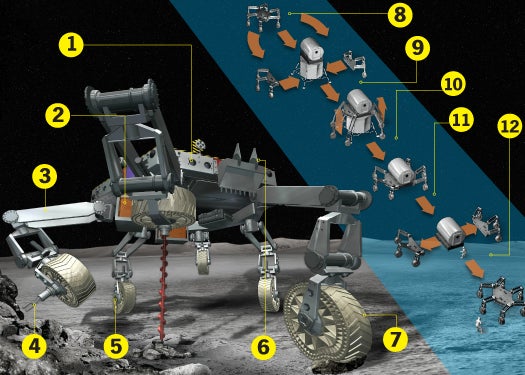 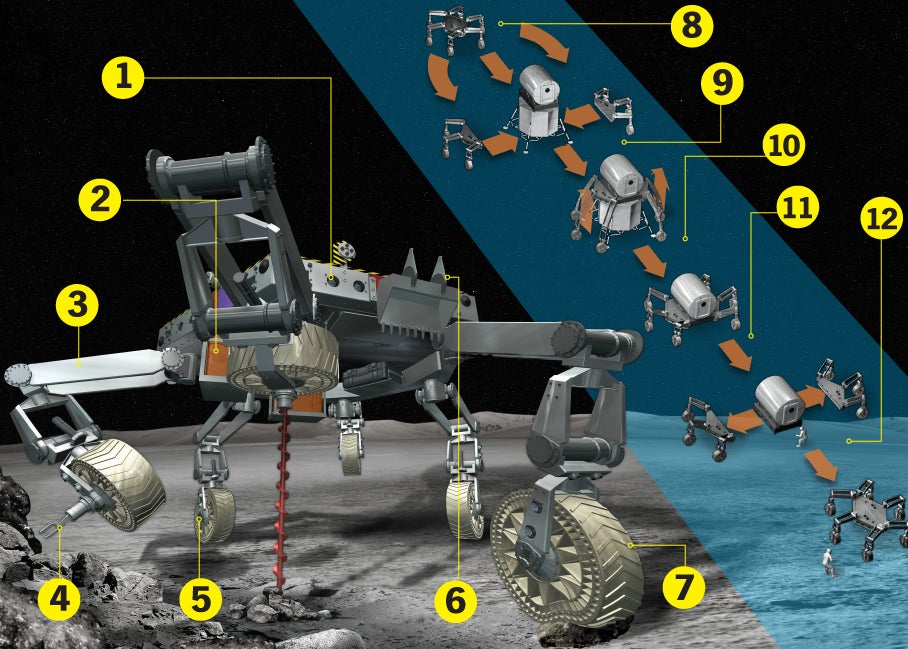 To build and supply a lunar base, astronauts will need heavy-duty space trucks for transporting gear. There’s just one problem: no roads. That’s why NASA engineers designed the rover they call ATHLETE (All-Terrain Hex-Limbed Extra-Terrestrial Explorer)—to handle any terrain, whether dusty, rocky, or crater-y.

The key is the rover’s six bendable spider legs and wheeled feet. On smooth surfaces, it rolls on those wheels; when it runs into an obstacle it can’t clear, it simply steps over it. ATHLETE can also split into a pair of robots that together pick up and haul specially designed shipping containers. (A lander would bring a container to the surface separately.)

So far, engineers at NASA’s Jet Propulsion Laboratory have demonstrated that their $2 million half-size prototype—which consists of two semiautonomous, three-legged robots—can move cargo, walk on inclines, and use tools. The researchers say the actual, 26-foot-tall rover could be ready to start working in space by 2017.

1) The ATHLETE moon rover has 48 stereo cameras, which stream 3-D video from its limbs, frame, and wheels to human operators on Earth or the moon, allowing them to look for hazards and maneuver tools. ATHLETE will have more cameras than any previous rover. (Curiosity has 17.)

2) The rover can refill its hydrogen fuel cells at a solar-powered station that splits water into hydrogen and oxygen (for astronauts to breathe).

3) ATHLETE‘s wheeled limbs let it walk, drive, or climb, depending on the environment. Each has seven motorized joints that bend and twist. ATHLETE controls each leg separately so that it can keep cargo level even while climbing uneven terrain.

4) Drills, scoops, and grippers collect rock and soil samples for analysis. One set of motors operates both the wheels and tools, which saves weight and makes the rover cheaper to launch into space.

6) A tool belt stores gear when not in use.

8) Drive: People in mission control (on Earth or on the moon) tell the ATHLETE rover to drive to a lander that has just touched down, carrying a cargo pallet. Incoming supplies must land far from the astronauts’ base to prevent jagged moondust from damaging equipment.

10) Stretch: The rovers straighten their legs until they’re 27 feet tall—high enough to reach above the lander to the cargo pallet—and use their motorized hooks to grab pins on either side of the cargo.

11) Walk: If the rovers travel over rocky terrain too uneven for driving, they can walk while keeping the cargo level.

12) Deliver: The rovers crouch down until the pallet is on the ground and then release it.