Coming In 2015: The First Spacecraft Encounter With Pluto

What's on the horizon for the New Horizons spacecraft 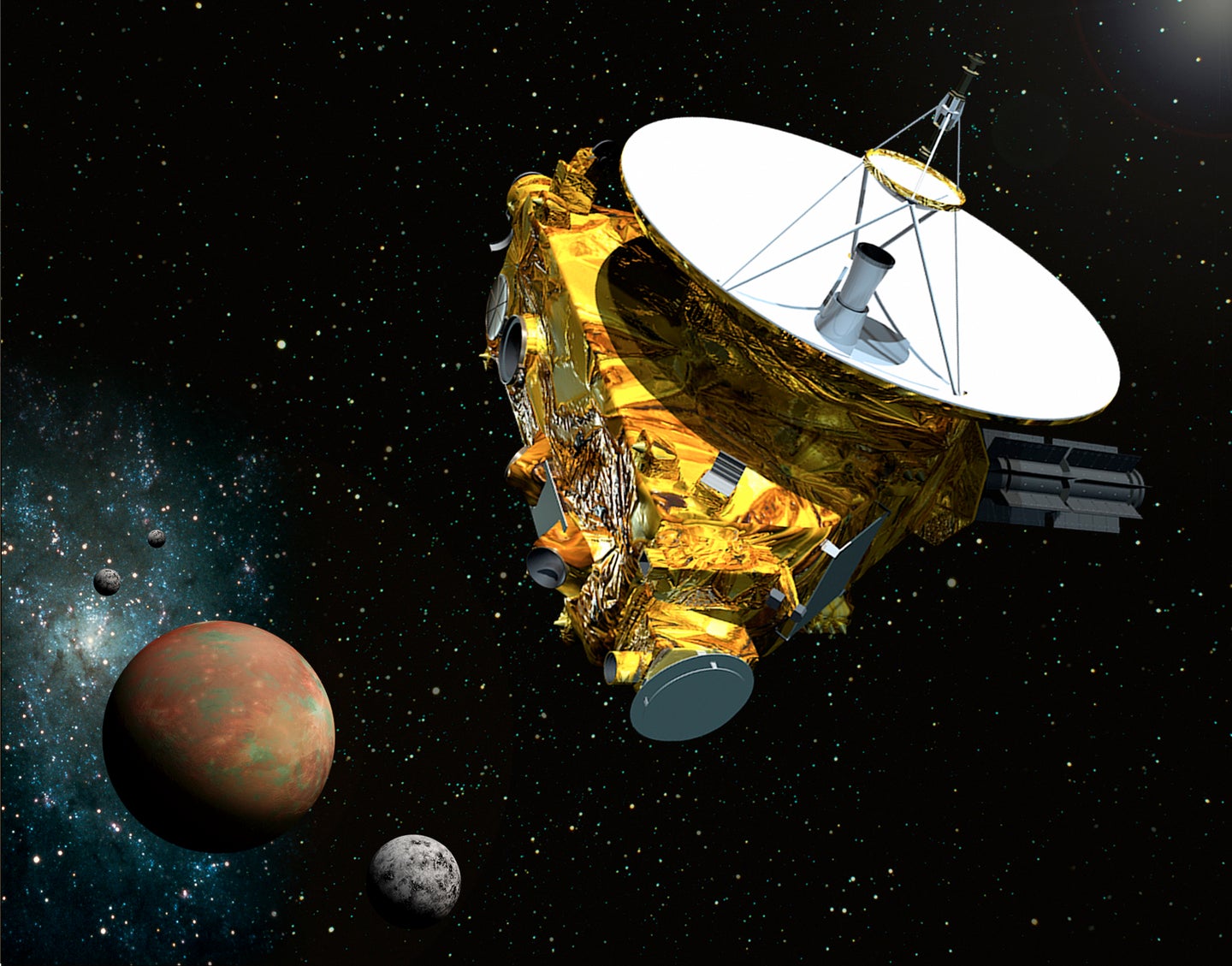 On Saturday, NASA’s New Horizons spacecraft awoke from a very long slumber. The space probe – which has been traveling for nearly nine years and has traversed 3 billion miles of space – has spent much of its life in “hibernation” in order to conserve its energy. But at 9:53 p.m. (EST) on December 6, NASA engineers received word that the vehicle became active once again.

That’s because New Horizons is finally coming up on its ultimate destination: the former planet Pluto.

New Horizons has been on its way to Pluto and the planet’s moon Charon since its launch on January 19, 2006. During the voyage, the spacecraft has spent two-thirds of its life in 18 separate hibernation periods. Throughout these sleepy times, much of the probe’s power was shut off, except for its onboard flight computer, which would send a weekly “beacon-status tone” back to Earth to let the New Horizons team know that the spacecraft is still on its way. The hibernation periods ranged from 36 to 202 days in length, helping to preserve the spacecraft’s components and reduce the risk of any system failures as the probed traveled to the outer solar system.

“This is a watershed event that signals the end of New Horizons’ crossing of a vast ocean of space.”

Back in August, engineers programmed a “wake-up” sequence into New Horizon’s computer, instructing the probe to come out of hibernation at 3 p.m. EST on December 6 – when the spacecraft would be just over 162 million miles from Pluto. Once it woke up, New Horizons sent a radio signal back to Earth informing NASA that its power was up and running. But the message took a little while to get here. Although the radio signal was traveling at light speed, it still had to traverse more than 2.9 billion miles to get back to our planet, taking four hours and 26 minutes to reach NASA’s Deep Space Network station in Australia.

“This is a watershed event that signals the end of New Horizons’ crossing of a vast ocean of space to the very frontier of our solar system, and the beginning of the mission’s primary objective: the exploration of Pluto and its many moons in 2015,” said Alan Stern, the New Horizons principal investigator.

When New Horizons arrives at Pluto, it will be the first spacecraft to ever reach the (hotly debated) planet. As it gets closer from January through July of 2015, the probe will begin observing the dwarf planet, taking hyper-detailed images that will put the Hubble Space Telescope’s Pluto pictures to shame. Additionally, information gathered by New Horizons will help NASA scientists better understand how Pluto and its moons “fit in” with the other planets and asteroids of our solar system – a topic that continues to vex scientists. 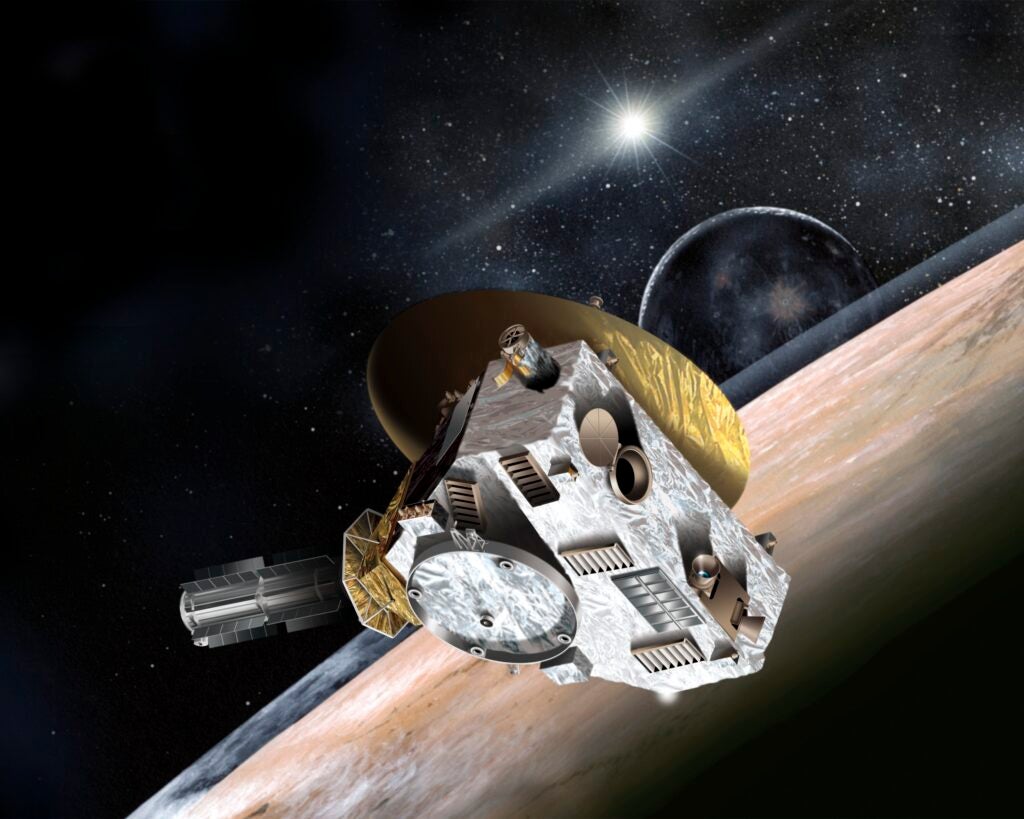 Here’s what we can expect from New Horizons now that it has had a good yawn and stretch:

Mid-May, 2015: By this point, New Horizons will be close enough to capture the most detailed views of Pluto we’ve ever seen. Be on the lookout this spring for some remarkable images of this tiny planet.

July 14, 2015: This marks the date when New Horizons will be at its closest to Pluto, possibly passing within 6,000 miles of the planet.

During the flyby, NASA scientists will expect a “frenzied 24 hours of data gathering.” The probe will take close-up images in both visible and near-infrared light, capturing features on Pluto’s surface that are just 200 feet across. Spectral maps created from near-infrared images will provide scientists with a better understanding of Pluto’s composition, as well as the temperatures of its materials. And, once the spacecraft passes the dwarf planet, it will continue taking pictures of Pluto’s dark side, looking for rings and measuring the atmosphere.

2017 – 2020: With NASA approval, New Horizons could keep on trucking, heading beyond Pluto to visit one or more objects in the Kuiper Belt – a huge population of rocks orbiting the sun past Neptune. The potential targets won’t be chosen until a later date, but they will most likely be between 30 to 60 miles across. The spacecraft’s encounters with these rocks would be very similar to its encounter with Pluto – including learning about their composition and searching for atmospheres.