Jupiter has 10 newly-discovered moons, and one is a weirdo

The survey also confirmed the existence of two other moons, whose discovery was announced last year 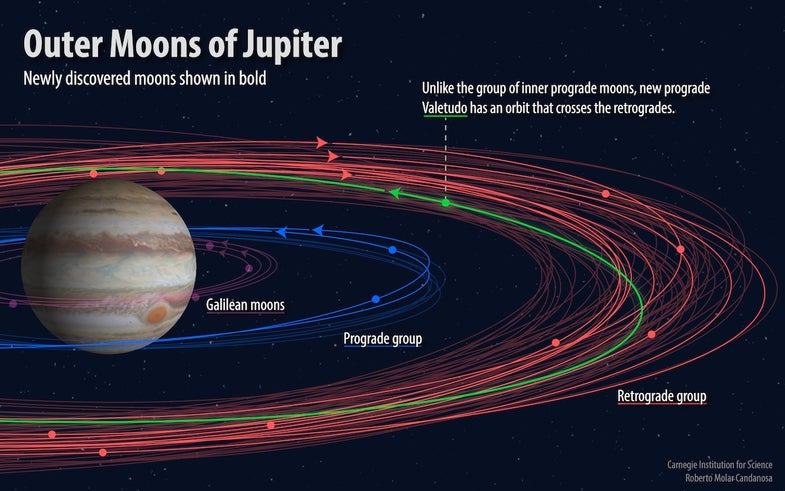 Jupiter has always held fast to the upper echelon of superlatives in our solar system. It was always the biggest planet, a heavyweight whose gravity influences anything that strays too close. It also has the largest number of moons, and just in case there was any dubt about that—we’re looking at you Saturn—researchers just announced that they’ve observed 12 more moons, including two that had been noted previously, and one that’s a little bit off.

Jupiter has 53 named moons, including the four largest—Ganymede, Io, Callisto, and Europa—which were discovered by Galileo Galilei back in 1610. Sixteen others still don’t have names, including two moons that were identified last year, bringing the total at that point up to 69.

The existence of those two were confirmed in this most recent announcement published in the International Astronomical Union’s Minor Planet Electronic Circular. The announcement also added an additional 10 bodies to our tally of Jupiter’s moon collection, which now stands at 79.

These moons aren’t big like the Galilean moons. “These are tiny—these are 1-3 km in size,” says Amanda Bosh, Senior Lecturer in the Department of Earth, Atmospheric, and Planetary Sciences at MIT, who was not involved in the research. “That’s why they haven’t been discovered before because they are so small and so faint.”

To understand the discovery, it helps to separate out the moons into groups. First up: the two that were discovered last year. Both are located in a group of moons travelling around Jupiter in the same direction as the planet’s rotation (in technical terms, they have a prograde orbit). These take about a year to go all the way around the planet.

The other 10 are farther out, around twice as far from Jupiter as the prograde group. Nine of these orbit the planet in the opposite direction (called a retrograde orbit) and take about two years to complete their journey.

Both the inner two and these outer nine are very similar to other, already discovered moons which share similar orbits at similar distances. Researchers think that because some of the moons share similar characteristics (the direction of their orbits, distance from the planet, and their tilt or inclination on their axis) that many of these were probably once part of a few larger parent bodies that got broken up in collisions, creating what astronomers call ‘families’ of moons circling around the planet.

Again, all 11 of those moons make sense to astronomers based on their orbits. The twelfth moon, on the other hand, is a total weirdo.

Tentatively named Valetudo after the Roman goddess of health and hygiene (also a great-granddaughter of Jupiter, ruler of the Roman pantheon, this moon is located way out near the retrograde moons, yet it has a prograde orbit.

“It’s like driving down the highway in the wrong direction, all the other objects are going one way and its going the other way” says Scott Sheppard, an astronomer at the Carnegie Institution of Science and lead researcher on the project. “That becomes a very unstable situation where a head-on collision is much more likely to happen.”

Bosh points out that this dynamic makes Valetudo especially hazardous to other objects that might cross its path. “When you have a head on collision, the relative velocity is the velocity of one car plus the velocity of the of the other car, so it’s a much more destructive process.” Bosh says. “The question is where did Valetudo come from, and how has it managed to exist in this region where it does cross into the realm of these other retrograde satellites?”

Sheppard thinks that this could help explain how the retrograde objects in the more distant group ended up in families, smashed to bits when something collided with their parent bodies. It could be that Valetudo is a remnant of the object that busted up the larger moons in the first place.

Sheppard wasn’t initially looking at Jupiter at all, though. He was looking for objects much further away.

“We’ve been doing the largest and deepest survey for distant solar system objects ever obtained.” Sheppard says. “We’re trying to cover as much of the sky as possible,searching for objects that are very distant—way beyond Pluto”

They were able to do this survey because a powerful camera had just been installed at the Blanco four-meter telescope in Chile. This allowed them to look for much fainter objects much further away than ever before.

In March of 2017, during a routine survey, they realized that Jupiter was in the same part of the sky, and decided to take advantage of the opportunity. “We decided to kill two birds with one stone,” Sheppard says. “We could look for Jupiter moons at the same time that we were looking for distant solar system objects.”

The telescope’s large camera offered advantages for the secondary search as well. “Jupiter, being the most massive planet in the solar system, has a very big sphere of influence so moons around Jupiter could be in a very wide swath of the sky. Covering that big area in the past has been like looking through a straw.” Sheppard says. But with the larger camera, they were able to search the area far more efficiently.

Getting more information about these newly-discovered moons will require more sightings by powerful telescopes, or a visit by some future spacecraft. In the meantime, we’re getting trounced in the natural satellite category. Not that we’re keeping score, but it’s Jupiter: 79, Earth: 1.