Planets Like Earth Could Be Closer Than You Think 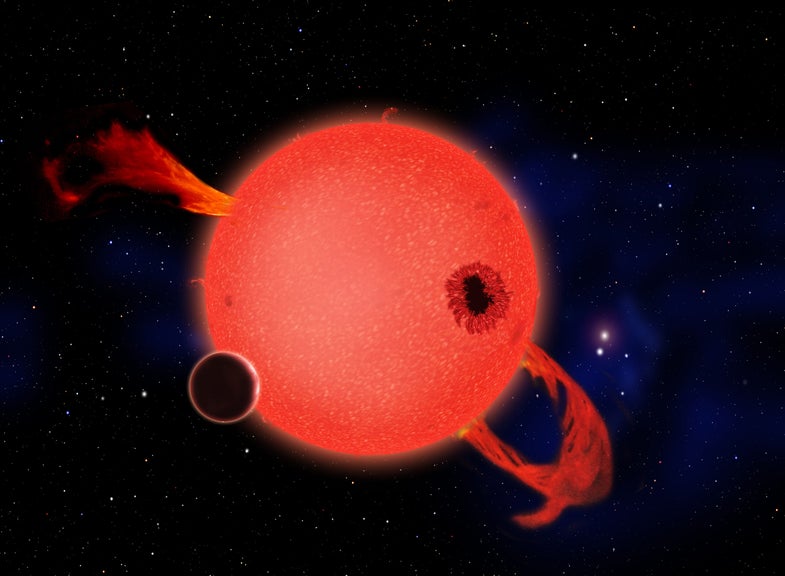 In the search for stars that can support Earth-like planets, red dwarfs in our galactic neighborhood may lead the way to discovery. Recent research reveals red dwarf stars might host more habitable planets in close orbits than previously thought–just as long as its exoplanets huddle in close enough for light (but not so close that molten lava blankets the surface).

Researchers at the Harvard-Smithsonian Center for Astrophysics took a second look at planetary data from NASA’s Kepler telescope because NASA had overestimated the size and temperature of red dwarf stars. Courtney Dressing, a Harvard astronomer, adjusted the data and started looking for planets similar in size and temperature to Earth. Based on her calculations, 6 percent of the 75 billion red dwarf stars studied could have an Earth-like planet, which may not sound like a lot but it’s the first time scientists could pin an actual number on these kind of exoplanets.

Why is this important? Because red dwarfs swarm the Milky Way galaxy, particularly around our solar system (they make up roughly 75 percent of stars in the Milky Way). That means, statistically, the closest Earth-like planets may be as few as 13 light years away. Unlike the recently discovered exoplanet in the Alpha Centauri system, these planets could potentially support life.

Not that a red dwarf star would make for terribly hospitable places, unless other conditions intervened. With a smaller star, planets orbit closer, and when they orbit closely, they stop spinning. That means one side of the planet could be perpetual day, while the other side is perpetual night. Nearby planets could help unlock the gravitational pull, while winds might distribute heat across the surface of a habitable planet. Ultraviolet flares could also pummel the surface of the planet if the atmosphere isn’t thick enough, or the ocean deep enough. And unlike our sun, red dwarfs don’t shine nearly as much in the visual spectrum. But Dressing told PopSci that the close orbit could mean more star shine for the exoplanet, increasing the habitability.

Still, the search is on, and Dressing has some targets in view that could be added to the short list of best places to live in the universe. Next, Dressing will hone in on three planet candidates, roughly 300 to 600 light years away, just outside our neighborhood.