The Moon Has Had Water Its Whole Life, New Study Says

The possibility of a wet early moon casts doubt on prevailing theories. 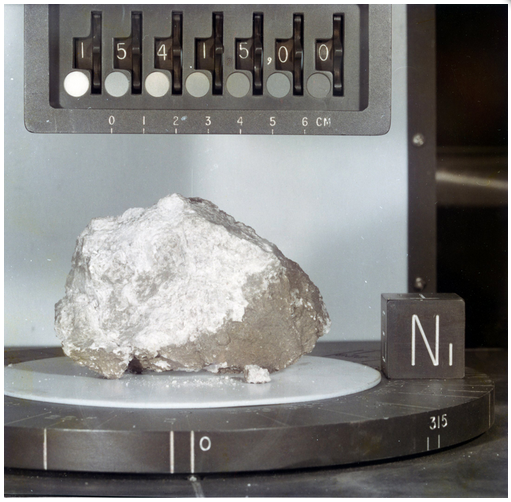 Scientists have known for almost five years now that the moon is watery–or at least that lots of water molecules are trapped in its crust and its permanently dark, frozen craters. The prevailing theory is that this water comes from molecules in the solar system. But maybe the moon has had water all along, according to a new study of Apollo moon rocks.

Hejiu Hui of Notre Dame, Youxue Zhang of the University of Michigan and their colleagues studied several rocks from the lunar highlands, recovered during the late Apollo missions. One rock was nicknamed the “genesis rock” after Apollo 15 astronauts recovered it on a crater rim. The rock was thought to have come from the moon’s primordial crust.

The researchers used infrared spectroscopy to peer inside the rocks without disturbing them, and were able to analyze the rocks’ water content. It’s not really water, per se, but the related chemical known as hydroxyl, which contains one atom each of oxygen and hydrogen.

Recent missions have found a whole lot of this on the moon. In the fall of 2009, the Lunar Crater Observating and Sensing Satellite, LCROSS, slammed into a permanently dark crater and found rich deposits of water ice. Around the same time, instruments on India’s Chandrayaan-1 probe found evidence of water molecules in the moon’s soil. And since then, follow-up observations have yielded plenty of other water evidence.

These vast quantities of water have mostly been explained by micrometeoroid bombardment, or even free molecules deposited by the solar wind. But Hui and Zhang say otherwise. The hydroxyl content of the rocks they examined suggests the lunar interior contained a whole lot of water when the moon was still young and molten, before the crust solidified.

That poses a bit of a problem, however. Most moon-formation theories hold that a Mars-sized object whacked the Earth and sheared off a giant hunk of rock that became our moon. Recent computer simulations show how this could have happened. But if it really did, all the water on that chunk would have instantly vaporized as the rock superheated. So why is it still there?

“Because these are some of the oldest rocks from the moon, the water is inferred to have been in the moon when it formed,” Zhang said in a statement. So maybe the moon didn’t form that way after all, or maybe this inference is incorrect somehow. More work now needs to be done to figure this out. The paper appears in Nature Geoscience. 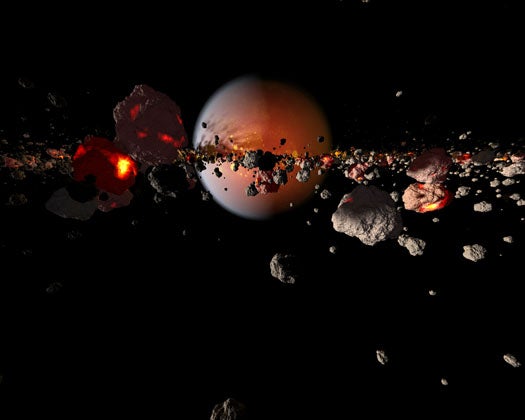