The little white dot is only going to get bigger 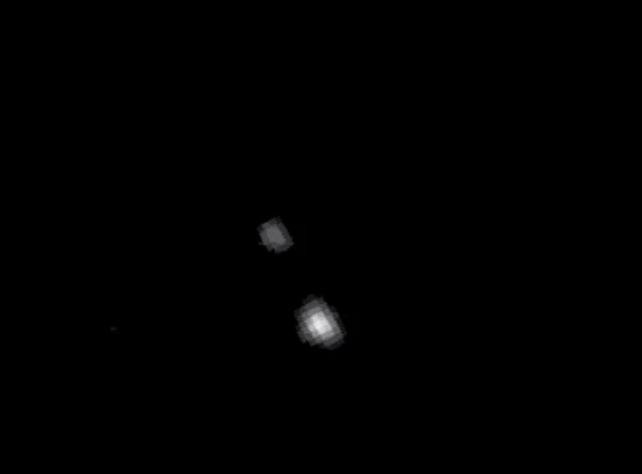 After waking up from its nearly 5-year-long slumber, NASA’s New Horizons spacecraft is fully powered and making its way to distant dwarf planet Pluto. And as it gets closer, the probe will be sending back some killer images of the rock and its tiny moon Charon.

Well today, we got our first taste of what the mission will offer. NASA just released the first couple of images captured by LORRI, New Horizons’ telescopic Long-Range Reconnaissance Imager, during the spacecraft’s 2015 approach. Taken on January 25 and 27, the photographs are still pretty grainy—New Horizons was about 126 million miles away from Pluto at the time—but they serve as an enticing appetizer for the images that we’ll be getting over the course of the next few months.

“Pluto is finally becoming more than just a pinpoint of light,” Hal Weaver, New Horizons project scientist at the Johns Hopkins University Applied Physics Laboratory (APL), said in a press release. “LORRI has now resolved Pluto, and the dwarf planet will continue to grow larger and larger in the images as New Horizons spacecraft hurtles toward its targets.”

The timing of the photos’ release also has special meaning: Clyde Tombaugh, the American astronomer credited with first discovering Pluto in 1930, was born on February 4, 1906. NASA released these preliminary images as a special birthday tribute to Tombaugh, who died in 1997.

New Horizons has traveled around 3 billion miles over the course of 9 years to reach Pluto. In July, the probe will come within 6,000 miles of the small planet—the closest a manmade craft has ever been to the space rock.