Did You Pay To Name A Planet? You Got Scammed

The International Astronomical Union issues a special report to let you know you’ve probably been screwed. 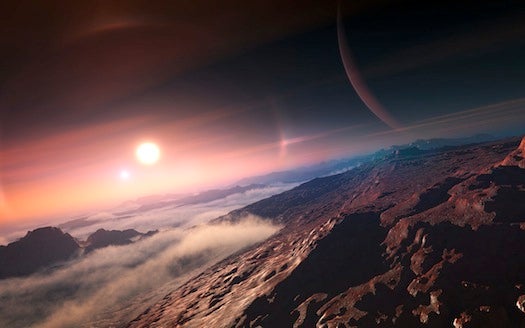 The diversity of exoplanets is large — more than 800 planets outside the Solar System have been found to date, with thousands more waiting to be confirmed. Detection methods in this field are steadily and quickly increasing — meaning that many more exoplanets will undoubtedly be discovered in the months and years to come. As an international scientific organisation, the IAU dissociates itself entirely from the commercial practice of selling names of planets, stars or or even "real estate" on other planets or moons. These practices will not be recognised by the IAU and their alternative naming schemes cannot be adopted.
SHARE

Most of the more than 800 exoplanets discovered have unbelievably boring names — 16 Cygni Bb or HD 41004 Ab, to name a couple. So some enterprising entrepreneurs have started a naming contest that allows users to pay to nominate and vote on new names ($4.99 a pop, though there are obviously bulk prices available as we’ve got a lot of planets to name). Namers receive a certificate commemorating their contribution to the wonderful world of science. Totally not sketchy at all, right?

Well, the International Astronomical Union is here to tell you that this is a scam! Or, according to its special Parisian press release, the IAU “wishes to inform the public that such schemes have no bearing on the official naming process.”

The IAU goes on to crush all potential planet-namers’ dreams, lecturing us on why it’s important to have an organized naming process (because it helps researchers keep track of all the current exoplanets bobbing about out there). This becomes even more crucial when considering that there are thousands of planets still being discovered — multiple names will only lead to confusion, they argue.

Not only does the planet-naming business have no actual validity, the same goes for all the schemes selling stars’ names, or real estate on the moon, the IAU says. (Yes, this really happens and has actually been a pretty lucrative business, at least for this guy.)

But the IAU concludes its scolding with a slight concession: maybe the current practice of naming planets with random letters and numbers could use some improvement. In fact, the union has gone so far as to agree to consult with IAU members to decide if it’s a good idea to give all the exoplanets “popular names,” too. If they do, we can only hope that by planet 453 they’ll realize they need some help and turn to the people. Being ripped off is the worst, but actually getting to name a planet would be pretty awesome.