Pluto’s ‘Heart’ Is Broken, And Its Moon Charon Is A Redhead 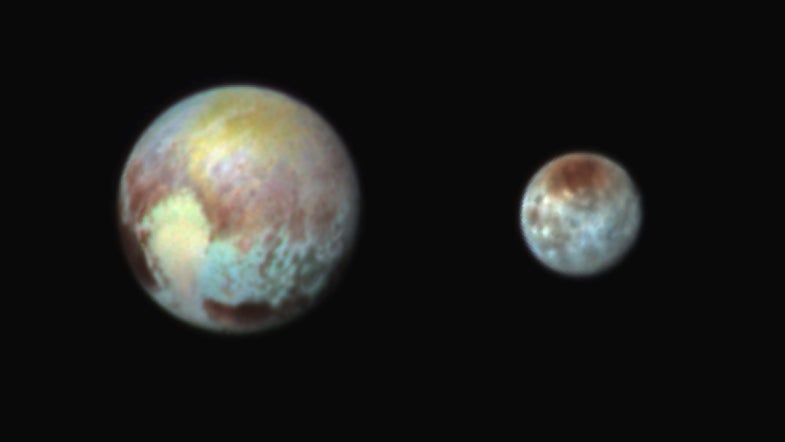 Scientists have tie-dyed Pluto and Charon, proving that the New Horizons flyby really is a scientific Woodstock. In the false color images above, the colors are stretched to reveal Pluto and its moon’s geology, molecular composition, and how radiation has shaped the surfaces. NASA released the photo this afternoon, though it was taken at 3:38 a.m. EDT on July 13.

The colors in this photo aren’t what Pluto and Charon actually look like, but are exaggerated so scientists can tell apart the chemical makeup and features. They show that Pluto’s beloved “heart” is actually composed of two distinct patches. The western lobe of the heart is shows up peach, in contrast to its bluish eastern half. The colors hint that the two halves are made of different stuff.

On Charon, the source of the moon’s surprisingly dark pole is revealed. “We’ve been looking at this dark polar spot for a while, and sure enough it is quite red,” said New Horizons astronomer Will Grundy during a press conference. Grundy’s theory is that the source of Charon’s red head is Pluto. The moon orbits in close proximity to Pluto, which is red in color, and it may be that some of the planet’s escaping atmosphere sticks to Charon.

The team is looking forward to getting data back from the spacecraft’s spectroscopic instruments, which can shed light on which materials are causing these interesting color shifts.

“We knew that there were a lot of different colors on Pluto, but we never imagined anything like this,” said deputy project scientist Cathy Olkin.

New Horizons cruised past the dwarf planet at 30,800 miles per hour at 7:49 a.m. EDT. Until about 9 p.m. EDT, the spacecraft isn’t communicating with Earth as it takes as much data and as many images as possible