The 4 Best Conspiracy Theories About The Russian Meteorite

Last week's meteorite impact: cosmic coincidence, or a sign of the Mayan apocalypse? Brush up on the nuttiest theories floating around the Web. 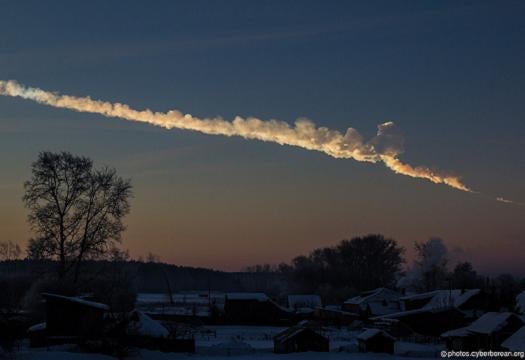 When something as mundane as a birth certificate is major conspiracy-theory fodder, it should be no surprise that the folks in tin foil hats have already concocted some not-so-obvious explanations for last week’s meteorite crash in Russia.

Read on for our four favorite space-rock conspiracy theories, in order from least likely to most likely.

Meet Gary C. Daniels, the author of several elaborately argued books about the Mayan prophecies. Using the logic of someone with a vested interested in selling Mayan apocalypse theories, he insists that the fact that the supposed date of the Mayan apocalypse has come and gone isn’t a strike against the theory. Instead, any natural disaster since December 21, 2012 is just more proof of his thesis:

…[T]he time period after December 21, 2012 should see an increase in catastrophes such as meteor airburst and impact events like the one that took place in Russia on February 15, 2013. I made this assessment based on my interpretation of the ancient writings and astronomical records of the Maya. I argued that the Maya were aware of multiple cycles of such catastrophes which they encoded into their calendars. Their 250-year calendar tracked smaller events and their 5000-year calendar tracked the larger events. December 21, 2012 marked the end of this 5000-year cycle and far from representing the “end of the world” I argued that it represented the beginning of a new age of disasters and cosmic catastrophes.

This story by the state-owned Russia Today initially attributed the explosion of the meteorite to a Russian missile, but that was just an explanation for the meteorite breakup. Other theories claim the meteorite itself was evidence of a new weapon.

Not to be outdone, Russian ultranationalist Vladimir Zhirinovsky claimed that the meteorite was actually “the Americans testing new weapons.” This theory gained traction on noted conspiracy-theory den Rense.com, where the meteorite crash is believe to have been a test of “Gods Rods, the ultimate bunker busters, which strike with Luciferian power despite their name, which came no doubt from the apocalyptic corps of evangelical graduates of the Air Force Academy.”

Within an hour of the meteorite impact, English-language Russian news aggregator RussiaSLAM had already reported on poll results suggesting that a tiny majority of Russians believed the meteorite was part of an interstellar attack.

Of course, the Russians weren’t the only ones to see aliens in the meteor’s massive vapor trail…

Last October, Firaxis Games released X-Com: Enemy Unknown, a video game that just so happens to begin with a meteorite strike that turns out to be the opening stages of an alien invasion:

Gamers over on Reddit immediately jumped on the coincidence, posting “we know what’s coming next” within hours of the impact.

This is hardly the first time an astronomical phenomenon has sparked a plethora of alternate explanations. The 1908 Tunguska Event, which most scientists believe was a meteorite that exploded mid-air, has been called everything from an alien crash-landing to a Nikola Tesla experiment-gone-wrong.

Here is a good debunking of some of these theories, and Popular Science coverage of the science of meteorite strikes continues. None of this will matter to the conspiracy theorists still insisting Tunguska was a cover-up, but whenever possible we like to be on the side of Bill Nye and science.