By The Numbers: The U.S.’s Warmest Year Yet [Infographic]

A PopSci interactive of the 30,854 record-breaking highs recorded across the country in 2012 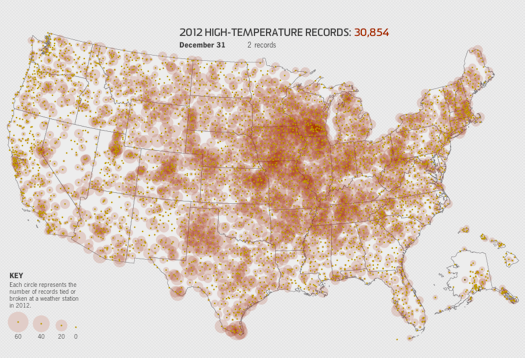 In the U.S., 2012 was the warmest year since national record keeping began in 1895. From January through December, the 4,451 U.S. weather stations that have been tracking temperatures for at least 30 years measured nearly 31,000 high-temperature records but only 5,900 lows. That’s the largest ratio of high to low records ever. “There is a lot of natural variability in these numbers,” says Claudia Tebaldi, a senior scientist at the independent research organization Climate Central. “But it’s definitely behavior that has the imprint of a warming climate.” Scientists say this trend will continue. A report published last year by the Intergovernmental Panel on Climate Change predicted that the lifespan of individual high-temperature records will continue to shorten: heat records that would likely have stood for twenty years in recent times will topple after an average of just two years by the end of the century.

Mouse over the timelines below to see the value of each data point:

About these visualizations:
On the U.S. maps, each gold point represents one of the 4,451 U.S. weather stations that has been recording temperatures for at least 30 years, the length of time the National Climatic Data Center uses as its standard for establishing a record. The area of the circle around each point represents the number of temperature records set to date at that station.

The interactive bar chart compares the relative numbers of high- and low-temperature records set each year, which corrects for the fact that more stations are established every year.

The data for all these visualizations comes from the National Climatic Data Center.