The only mammals that can fly are also the only mammals with a larynx that flexes at ludicrous speed, a new study shows. As bats flip and whirl toward their prey, they chirp at an accelerating rate, increasing their echolocating calls to 160-190 chirps per second. This is possible because their laryngeal muscles can contract up to 200 times per second, researchers say.

Bats start out with shorter-rate chirps, increasing their frequency as they approach their quarry and culminating in a superfast pulse called the terminal buzz. Watch the video below to see what this sounds like. Coen Elemans and John Ratcliffe at the University of Southern Denmark set out to study how bats produce this buzz. They also wanted to determine whether the upper buzz limit is a function of how quickly the bats can hear the return signals that bounce off their prey, or whether it’s because of the bats’ own call-producing abilities.

They set up a chamber with 12 microphones and recorded the activities of five different free-flying Daubenton’s bats, little bats found in woodland areas from Britain to Japan. The bats hunted mealworms that were suspended in the chamber. The animals’ chirp rate was so rapid that the researchers knew they couldn’t be using normal skeletal muscle.

They attached the bats’ vocal muscles to a motor and a force monitor, and stimulated the muscles to flex. The researchers monitored how long it took a muscle to twitch, and determined the muscles were able to contract and relax at frequencies up to 180 Hz and, in one case, up to 200 Hz.

They also noticed that echoes from individual calls ended before the start of the next call, so the bats don’t confuse themselves. But a bat could theoretically produce calls at a greater frequency than 200 Hz — up to 400 Hz before echo interference would become a problem. The reason they don’t? The superfast muscles are only so fast.

Andrew Mead, a biology graduate student at the University of Pennsylvania’s School of Arts and Science, said the muscle performance could be equated to a car engine: “It can be tuned to be efficient, or tuned to be powerful depending on what you want it to do.”

Bats trade off some force to achieve the rapid oscillations, he said in a statement. “In a way it’s like an engine that’s been tuned for extremely high RPM.”

These laryngeal muscles contract at a rate 20 times that of the fastest human eye muscles, and about 100 times faster than typical skeletal muscles, the researchers say. 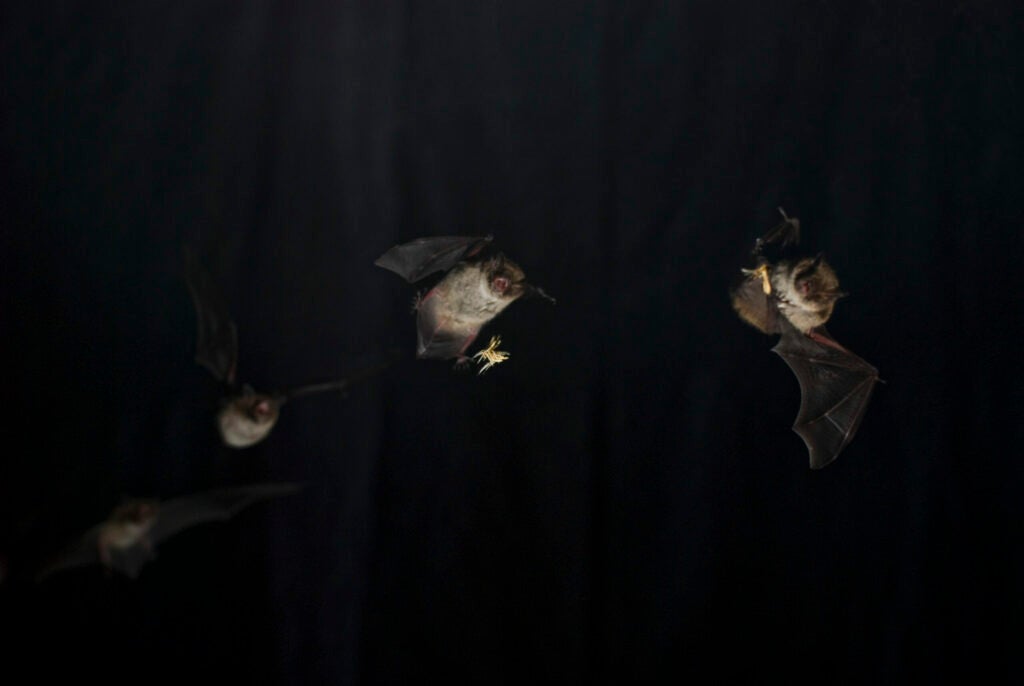 This multiflash photo shows the aerial maneuvers of a Daubenton’s bat attacking a mealworm.

Previously, scientists thought these ridiculously quick muscle contractions were only found in the sound-producing organs of rattlesnakes and some types of fish. In 2008, Elemans located them in songbirds, too, and now he’s found them in the first mammal. It suggests that these special muscles are more common than previously thought.

The research is published in today’s issue of the journal Science.