Robotic Venus Flytraps Will Trap Bugs and Eat Them For Fuel

It’s alarming enough when robots ingest plant detritus like twigs and grass clippings. It’s another thing entirely when they can...

It’s alarming enough when robots ingest plant detritus like twigs and grass clippings. It’s another thing entirely when they can start chowing down on members of the animal kingdom. A pair of prototype robots are designed to catch bugs, a major step on the path toward robots that can hunt, catch and digest their own meals.

The tiny robots are modeled after the lobes of Venus flytraps, which snap shut as soon as sensitive hairs inside detect an alighting insect. One prototype, developed at Seoul National University, is made of shape-memory materials that switch between two states when subjected to a current. The other, made at the University of Maine, uses artificial muscles made of a gold nanomaterial.

The Seoul robot has a pair of carbon fiber leaves connected by a shape-memory metal spring, as explained by New Scientist. The spring works like your average mousetrap — the weight of an insect (or something else) causes the spring to contract, which pulls the leaves together. The robot’s quarry is trapped inside.

The Maine robot, which is reported in the online version of the journal Bioinspiration & Biomimetics, uses an ionic polymeric metal composite, which bends in an electric field. Engineer Mohsen Shahinpoor said the manner in which a Venus flytrap’s lobes contract looks remarkably similar to the way his IPMC contracts in the presence of a voltage.

He built a prototype using a polymer membrane coated with gold electrodes, a design he had previously developed in other experiments, according to PhysOrg. This material is used to make two leaves, with the IPMC electrodes serving as the flytrap’s sensor hairs. The two leaves are connected by a copper electrode, as seen in the image at the top of the page. When an insect alights on the polymer membrane, the IPMC “bristles” send a signal, which trigger the lobes to snap toward each other.

Of course, it’s still a pretty big leap to robots that can make use of whatever they’ve trapped inside their lobes. An insectivorious robot would probably have to transport the dead prey to some type of mechanical-chemical gut for digestion and caloric production, which would be quite a feat. But then again, we’ve seen it before with the EATR bot, so it’s certainly possible. Let’s hope no one endeavors to make an Audrey II-sized flytrap robot. 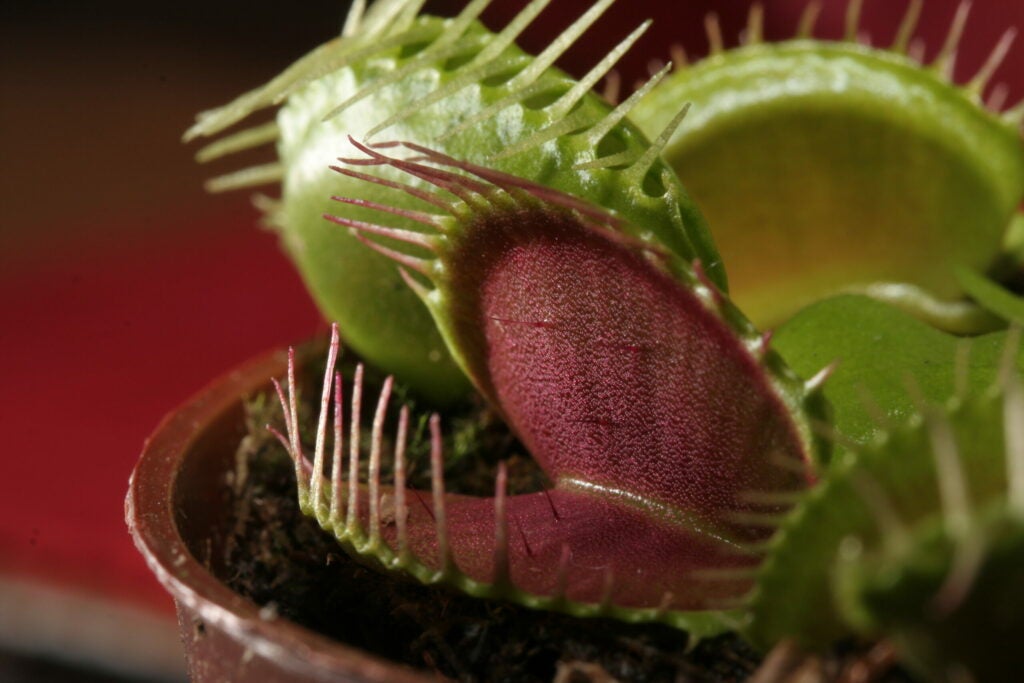