Genetically modified glow-in-the-dark cats not only make stylish, futuristic pets, but now provide insight into feline AIDS as well. The... 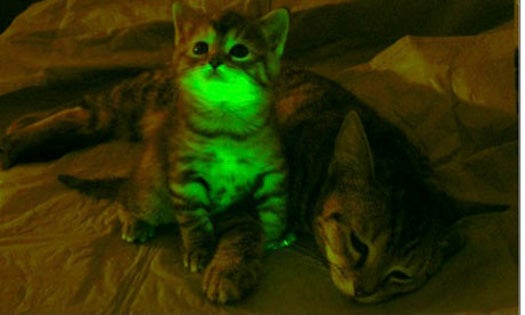 Genetically modified glow-in-the-dark cats not only make stylish, futuristic pets, but now provide insight into feline AIDS as well. The cats were injected with an antiviral gene from a rhesus macaque monkey that helps them resist feline AIDS, along with one that produces the fluorescent protein GFP.

The latter gene, which is naturally produced by jellyfish, is regularly used in genetic engineering as a way to mark cells. If the cats aren’t glowing, then the AIDS-resisting gene might not have made it into the cell either.

The team of American and Japanese scientists injected the antiviral gene and the GFP gene into feline eggs. Almost all of the offspring from these modified eggs had the restriction factor genes, with both fluorescent and AIDS-fighting proteins made throughout their bodies. Cells taken from the animals were found to be resistant to FIV, and the team plans to eventually expose the cats themselves to the virus to see if the restriction factors will protect them. Proof that these genes can protect cats from feline AIDS would be a huge step towards figuring out how to protect humans and prevent HIV.