You probably saw that super viral quantum locking levitation video that bounced all over the Web last week (though technically... 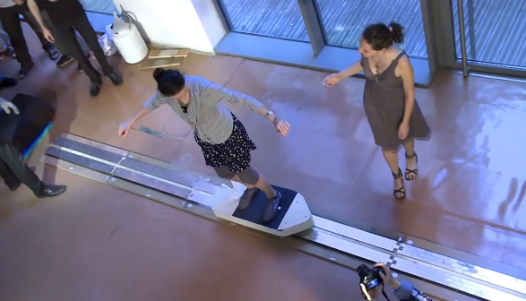 You probably saw that super viral quantum locking levitation video that bounced all over the Web last week (though technically it’s been around since summer) in which a team of researchers plays with some liquid nitrogen, a small superconducting disc, and some strange quantum phenomenon that makes the disc hover above a magnet, no strings attached. This week’s levitation vid taps a similar phenomenon known as the Meisnner effect to achieve this kind of levitation at a decidedly cooler scale: that of the hoverboard.

MagSurf, build by researchers at Universite Paris Diderot in France, flips the strange world of the quantum into a more sci-fi application, essentially turning a skateboard like platform into one big magnetic superconductor. Using liquid nitrogen, the team turn the platform super-cold, creating an electromagnetic field that is expelled from the inside of the board. It’s not quantum locking–the skateboard is too big to mimic that little super-cooled disc–but it provides enough outward magnetic force to float above a rail of permanent magnets.

It’s sort of like a Maglev train, and sort of not. But, says SmartPlanet, one group of researchers in Japan is reportedly working on scaling exactly this kind of technology into better levitating train tech. That sounds somewhat difficult, given the extremely low temperatures needed to make this kind of thing work. For your enjoyment, the quantum locking video–which is really cool if you haven’t seen it–is below.