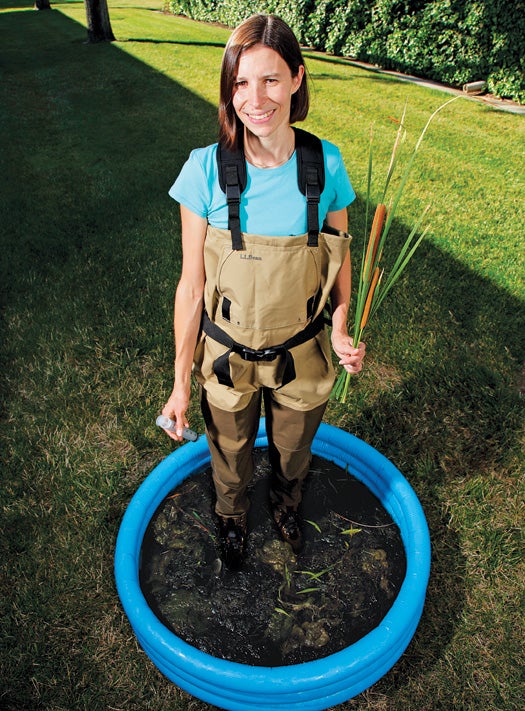 Susannah Tringe spends a fair bit of her work time, currently for the U.S. Department of Energy Joint Genome Institute, in the fragrant, murky wetlands of California’s Sacramento–San Joaquin Delta. Thriving microbial communities there could be the key to understanding how wetlands mitigate or exacerbate greenhouse-gas levels in our atmosphere. Tringe is cataloging the genetic fingerprints of the entire microbial ecosystem to determine how these wetlands work and if we can tailor them while restoring drained wetlands to absorb more greenhouse gas than they emit.

A biophysicist by training and a crossword-puzzle fiend in her spare time, Tringe is focused most closely on wetland microbes and the soil and plants they live in and on. Studying the ecosystem’s collective biology, she says, will help her figure out whether the wetlands are pulling carbon dioxide out of the atmosphere—or whether, in some cases, they’re net producers of methane and other greenhouse gases. But this practice poses logistical problems: a single cup of swamp sludge can contain many thousands of microbe species, and it’s very difficult to isolate each one and catalog its genes individually.

Instead, Tringe extracts the Dna from all the microbes in an entire sample to determine which genes are present. “If a lot of organisms in an environment have a gene, it’s probably pretty important,” she says. When she finds many genes in a microbe sample that code for processes guiding carbon storage, for example, that is a good indication that microbes, not just vegetation, are important for sequestering carbon dioxide.

The Department of Energy recently awarded Tringe a $2.5-million research grant to continue her study of wetland ecosystems, with the goal of finding the best way to restore them. Tule, a plant commonly used to restore wetlands, harbors methane-producing microbes in its roots, tringe found. Replacing the tule with a different plant might cut down on greenhouse-gas seepage. If we restored all the drained wetlands in the Sacramento delta, she says, “it would be like converting all the SUVs in the state into hybrids.”