Giant webs give the landscape an eerie feel 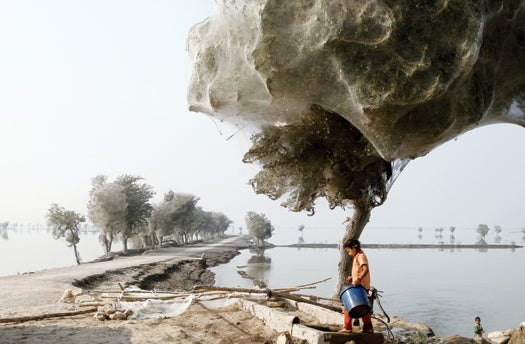 A girl walks past a tree covered in spider webs in the flood affected areas of K.N. Shah, located near Dadu in Pakistan's Sindh province, December 7, 2010. The cocooned trees have been a side-effect of spiders escaping flood waters in the area. Although people in this part of Sindh have never witnessed this phenomenon, they report there are now less mosquitoes, thus reducing the risk of malaria. Picture taken December 7, 2010. REUTERS/Department for International Development/Russell Watkins (PAKISTAN - Tags: SOCIETY ENVIRONMENT DISASTER) FOR EDITORIAL USE ONLY. NOT FOR SALE FOR MARKETING OR ADVERTISING CAMPAIGNS. THIS IMAGE HAS BEEN SUPPLIED BY A THIRD PARTY. IT IS DISTRIBUTED, EXACTLY AS RECEIVED BY REUTERS, AS A SERVICE TO CLIENTS. © Ho New / Reuters
SHARE

Last summer’s floods in Pakistan displaced millions of people–and millions of spiders. Although spiders rarely migrate to trees during natural disasters, the flooding was so heavy and prolonged, they had to climb trees and remain there. According to University of Akron biologist Todd Blackledge, who studies web-weaving spiders, some spin new webs each day. After weeks, the dense layers of silk, seen here in Sindh province, covered the trees–a result of continuous web spinning by the eight-legged refugees.

During a humanitarian-aid trip last December, Russell Watkins, a photographer with the British government agency the Department for International Development, encountered the web-veiled landscape. “I wasn’t prepared for the scale,” he says. “Literally thousands of trees and bushes over dozens of miles were shrouded. It really was very spooky.”

While the floods displaced spiders, the mosquitoes were surprisingly unaffected. The stagnant water should have provided prime breeding grounds for the insects, but local inhabitants noticed that there were far fewer mosquitoes than expected. Although the spiders could have accounted for some of the mosquito population drop, John Gimnig, an entomologist with the Centers for Disease Control and Prevention, says that shifts in climate affect mosquitoes more than spiders do.