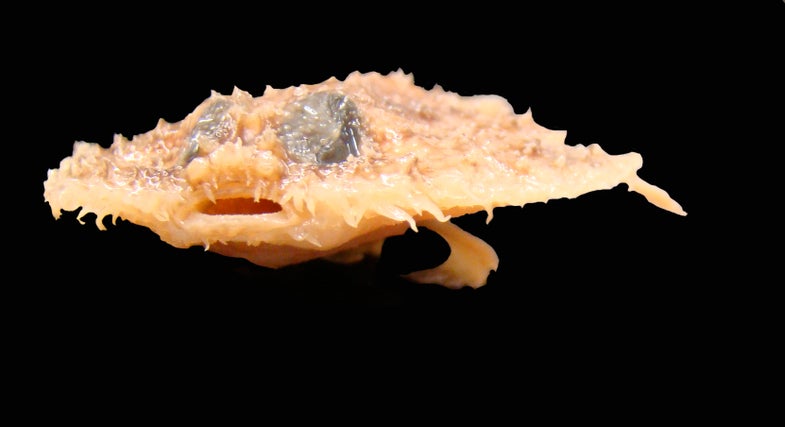 This planet is home to some incredibly awesome things, and every year we enjoy hearing about the new creatures that had, until recently, escaped biologists’ attention. Among scientists’ top 10 new species for 2010: A leech with gigantic teeth, a bioluminescent fungus, a mushroom with gills for breathing underwater and a spider that spins material 10 times stronger than Kevlar.

Topping our list of favorites is the “tyrant leech king,” Tyrannobdella rex, measuring just 2 inches in length but with a single jaw and massive teeth. This bloodsucker was found attached to the nasal mucous membrane of a person in Peru, scientists said.

This monster is followed closely by the Louisiana pancake batfish, a flat, gloopy-looking pale creature that lives in the area covered by last year’s Deepwater Horizon oil spill in the Gulf of Mexico. The pale Halieutichthys intermedius bottom-dweller hops awkwardly on its arm-like fins, resembling a walking bat.

John Sparks, one of the scientists who reported the discovery and who is curator of ichthyology at the American Museum of Natural History, said: “If we are still finding new species of fishes in the Gulf, imagine how much diversity, especially microdiversity, is out there that we do not know about.”

Here are some other highlights:

There are other insects, a fruit-eating lizard, and a cute mini antelope, too. Check out our photo gallery to see all the top 10.

These bizarre creatures are probably only the tip of the iceberg, scientists say. The top 10 list is intended to highlight the importance of ecological preservation and biodiversity, and it was announced today to celebrate the birthday of Carolus Linnaeus, who started the modern system of plant and animal names and classifications.

Scientists’ best guess is that all species discovered since 1758 represent less than 20 percent of the plants and animals living on Earth, said Quentin Wheeler, an entomologist who directs the International Institute for Species Exploration at Arizona State University.

“A reasonable estimate is that 10 million species remain to be described, named, and classified before the diversity and complexity of the biosphere is understood,” he said.

Pretty impressive when you think about it. Here we are looking for life on other worlds, but there is so much left undiscovered right here, under our noses. Or inside them, as it were. 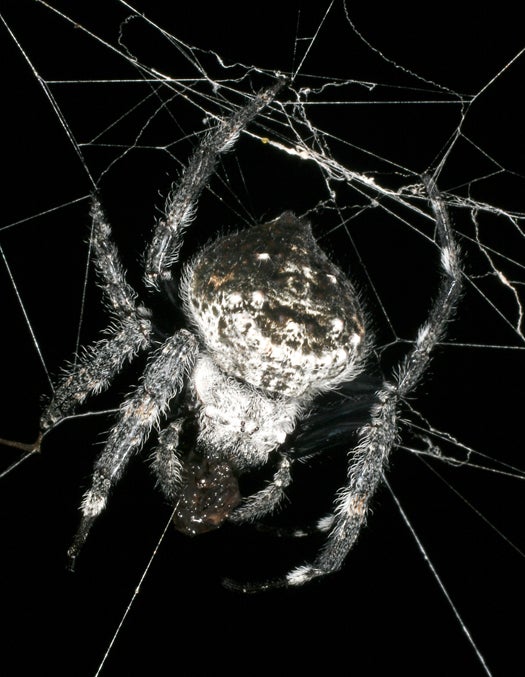 Caerostris darwini The bark spider spins the largest orb-style webs in the world with a silk that is ten times stronger than Kevlar and the strongest biological material known to man. Described exactly 150 years after the first publication of The Origin of Species, this spider was named in honor of Charles Darwin. Jump back to read more about these ten new species. 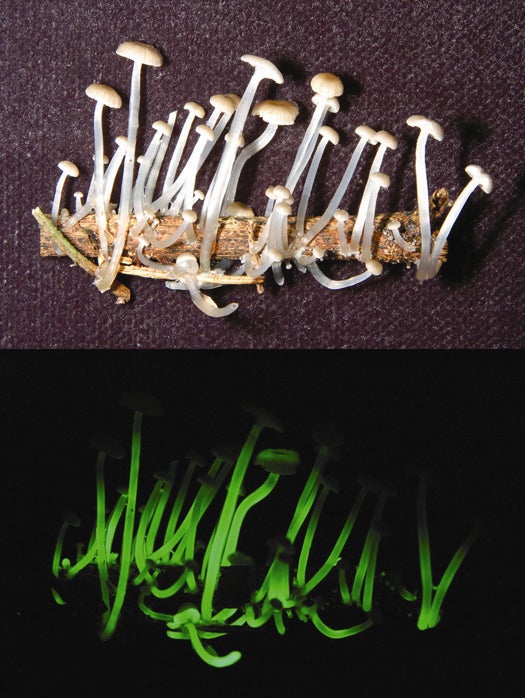 Mycena luxaeterna One of only 71 known species of bioluminescent fungi, these mushrooms constantly emit a greenish-yellow light from their stems. They were collected near Sao Paolo, Brazil, in some of the last remaining Atlantic forest. 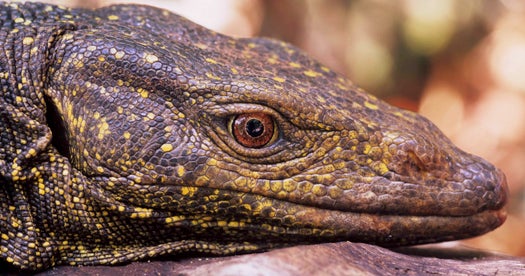 Varanus bitatawa This lizard is over 6 feet long and weighs around 20 pounds. Though known by local hunters, it had eluded biologists until recently as it is primarily a tree-dweller. It is only found in the Northern Sierra Madre Forest on Luzon Island in the Philippines. 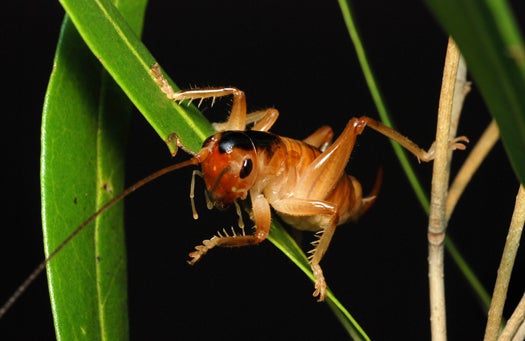 Glomeremus orchidophilus Found on RÃ(C)union Island in the Southwestern Indian Ocean, this cricket is the only pollinator of a rare orchid also found on the island. This is the first clear evidence of cricket-mediated pollination in flowering plants. 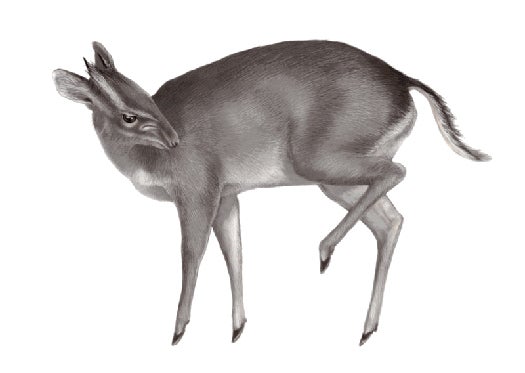 Philantomba walteri This deerlike mammal was discovered in West Africa at a bushmeat market. It is named Walter’s Duiker in honor of Walter Verheyen, who is believed to have collected the first sample of the species in Togo in 1968. 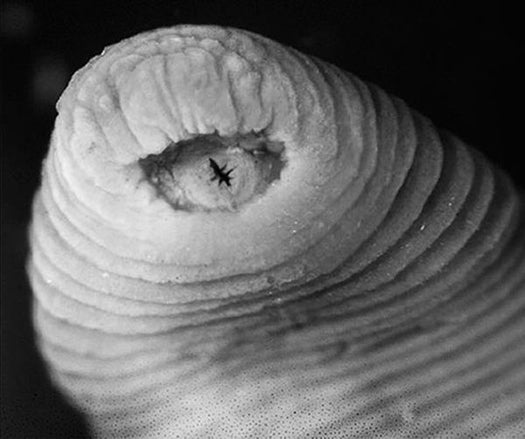 Tyrannobdella rex In what was surely an unpleasant moment of discovery, this T. rex leech was found on the nasal mucous membrane of a girl in Peru. The size of its teeth are unusual for a leech with a single armed jaw. 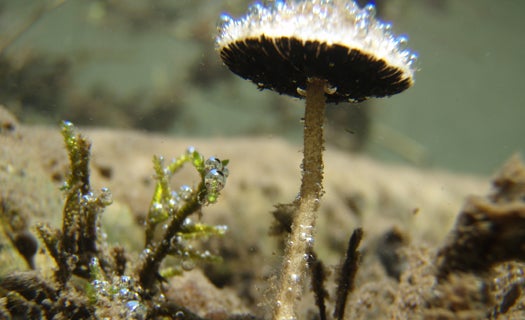 Psathyrella aquatica Found in the Rogue River in Oregon, these fungi are the only known species of mushrooms that fruit underwater. 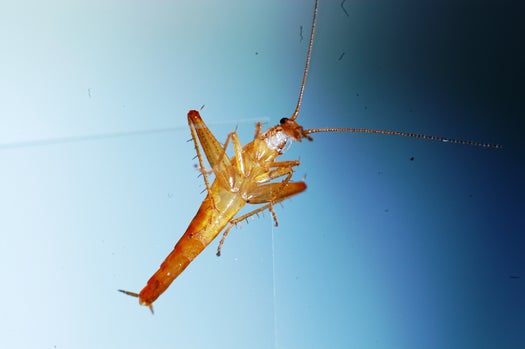 Saltoblattella montistabularis This cockroach’s legs are specially adapted for jumping, an adaptation which has not been seen since the Jurassic period. Its jumping prowess is akin to that of a grasshopper. The antennae provide an extra point to stabilize it while jumping. 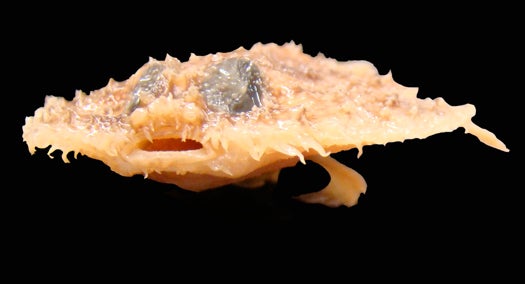 Halieutichthys intermedius The crown jewel of this list, the Lousiana Pancake Batfish’s well-being is unfortunately on tenterhooks thanks to the 2010 oil spill in the Gulf of Mexico. The spill encompasses the batfish’s entire known distribution.

Halomonas titanicae Found on a rusticle on the sunken Titanic, this bacteria consumes iron oxide. Along with other microorganisms, the bacteria have contributed to the decay of the ship’s metal by sticking to the steel and forming mounds of corrosion material. Pictured here: on the left, a negative staining of a bacterium; right, a stack of bacteria forming a stalactite-esque structure.
Animals
discoveries
endangered species
new species
Science