Our ancestors evolved from "Jurassic Mother" 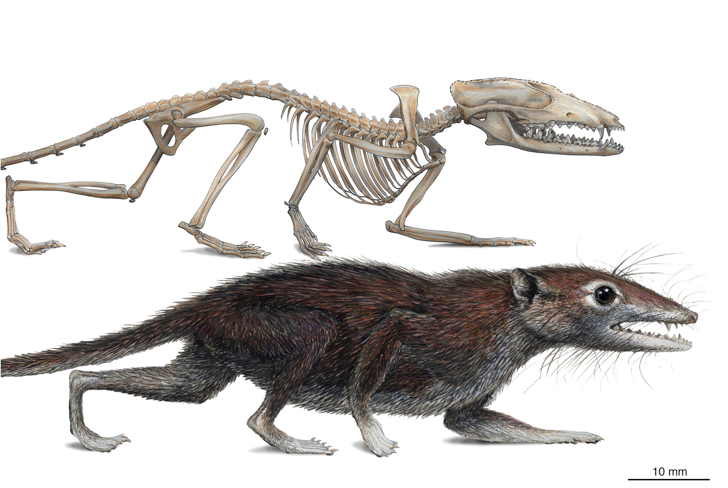 This pointy-nosed shrew, a new fossil find from China, may be the earliest grandmother of all placental mammals, scientists report in a new study. Or perhaps she is the oldest great-aunt. Either way, it’s another big find this week in paleontology.

The new shrew, Juramia sinensis, is the earliest known example of a placental mammal, which (unlike egg-laying monotremes and pouch-carrying marsupials) gives live birth. All placental mammals — from you to dolphins to bats — diverged from an animal like this one. Its discovery pushes back the marsupial-placental mammal evolutionary divergence by about 35 million years, to 160 million years ago, according to researchers in China and the U.S. This corresponds with DNA research that predicted an earlier divergence than the oldest previously known sample, Eomaia, which was 125 million years old.

The new fossil serves as “a corroboration of the newest fossil record with the molecular clock of evolution,” according to the researchers, led by Zhe-Xi Luo of the Carnegie Museum of Natural History in Pittsburgh.

The shrew lived alongside the Jurassic-era dinosaurs, likely living in fern forests and feeding on insects. It was unearthed in a fossil field in China’s Liaoning Province, where paleontologists found most of its skeleton, all of its teeth, part of its skull and, as Scientific American points out, even some hairs.

Luo and colleagues from the Chinese Academy of Geological Sciences and Beijing Museum of Natural History embarked on a detailed study of the shrew’s teeth, which they say represent an ancestral version of modern mammal molar arrangement. Some characteristics of its arms and wrists also represent early eutherian characteristics, the researchers report. Its hands were able to grip objects, which suggests the mammals climbed trees. This ability may have helped the animals exploit new territory, further driving their evolution as distinct from monotremes and marsupials.

The naming of the shrew reflects its importance to mammalian heritage, the researchers explain: Jura means Jurassic; maia means mother, in reference to the placenta; sinensis means “of China.” The name means “Jurassic mother from China.”

The shrew is described in this week’s issue of the journal Nature.