Hydrogen fuel cells could someday meet a host of industrial energy needs, but it’s difficult and dirty to produce hydrogen... 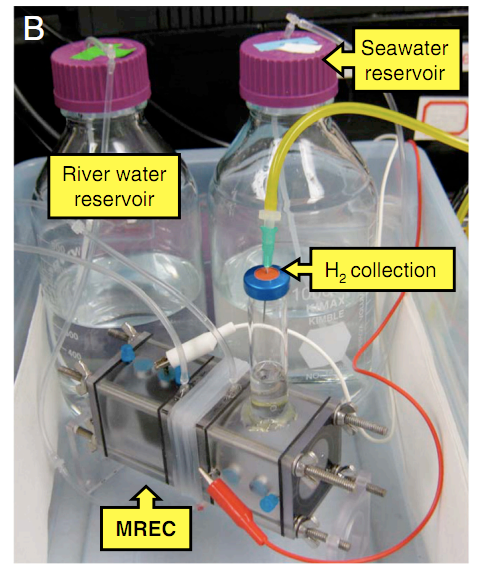 Using a pump, liquid flows continuously between a seawater bottle and a freshwater bottle. The system is called a microbial reverse-electrodialysis electrolysis cell. Kim, Logan/PNAS
SHARE

Hydrogen fuel cells could someday meet a host of industrial energy needs, but it’s difficult and dirty to produce hydrogen using current methods. A new type of microbial fuel cell can power itself and produce a renewable supply of hydrogen, according to researchers at Penn State University. The system uses some seawater, some freshwater and bacteria.

It adds a water-based power supply to a microbial fuel cell, so there’s no need for an external power source to augment the byproducts of microbial metabolism. Getting off the grid is a major breakthrough for fuel cell tech, according to the study’s authors.

To provide extra power, Younggy Kim and Bruce Logan at Penn State used a reverse electrodialysis (RED) system, in which charged particles move in one direction through a membrane. Kim and Logan filled one chamber with seawater and another with freshwater. The salinity difference drives ions from the seawater side through an ion-exchange membrane to the freshwater side, which creates a voltage across the membrane.

The bacteria are placed on the freshwater side, where they munch on organic matter, releasing electrons as part of their metabolic processes. Combined with the energy from the RED system, the whole contraption produced enough voltage to break up water molecules into oxygen and hydrogen gas. The researchers called it a “microbial reverse-electrodialysis electrolysis cell.”

“Individually, neither of these systems can accomplish hydrogen gas generation,” the authors explain in a paper published in the Proceedings of the National Academy of Sciences. “The MEC requires an energy input (added voltage); and a small RED stack by itself cannot produce current.”

As an added bonus, the bacteria used in this device can eat organic waste, so the system could conceivably be used for wastewater treatment, the authors said. Future prototypes could examine how flow rates would affect voltage production.

For now, however, the system is too costly to build to really make a difference in hydrogen production. Maybe someday.