A new spider robot moves delicately over uneven surfaces, carefully picking its way across debris, chemicals or other locations where... 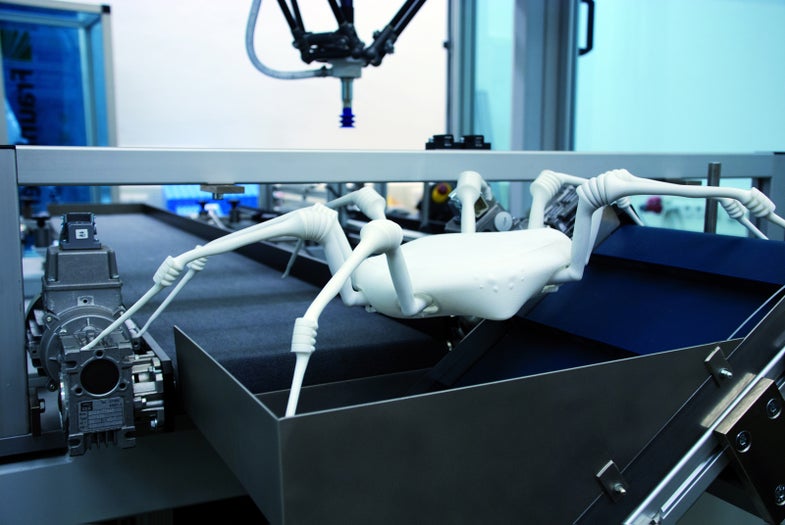 A new spider robot moves delicately over uneven surfaces, carefully picking its way across debris, chemicals or other locations where a human — or a clumsier robot — could not safely tread. Unlike other spiderbots we have seen, this German robot is designed to move with care and grace.

The goal is an emergency surveyor robot that can carry cameras and other sensors without tipping over, not a simple task for a robot. Engineers at the Fraunhofer Institute for Manufacturing Engineering and Automation IPA built the spiderbot to mimic real arachnids in both form and function.

Spiders don’t use muscles to extend their legs, instead stretching and even jumping with the use of hydraulic pressure. This is why dead spiders’ legs curl up. Similarly, Fraunhofer’s spider uses pneumatically operated elastic drive bellows. The bot achieves locomotion by compressing fluid to extend its legs, and articulated hinges allow the legs to move forward and turn. A front-facing pair of legs bend to pull the spider forward, and the back legs stretch out to push it. It keeps four legs on the ground at a time, while the other four turn and prepare for the next step — just like a real spider.

The robot’s abdomen holds all the controls, including the pressure valves and pump. The body can also hold a variety of sensors, according to Fraunhofer Research News. The creature was designed and fabricated using a 3-D printer, so its laser-sintered legs and body can easily be modified. The legs can be designed with varying load-bearing capabilities, for instance. And it’s cheap to make, unlike mechanically engineered metal robots — “It can be discarded after being used just once, like a disposable rubber glove,” says Ralf Becker, a scientist at Fraunhofer who designed it.

Fraunhofer engineers envision using their bot to conduct emergency response surveillance, carefully crawling along the ground to assess danger, detect chemicals or radiation, and sending video back to human controllers.