Did an Ancient Kraken Create Its Own Friends? What About a Modern Jellyfish?

A strange arrangement of ichthyosaurus bones suggests that a giant (and hypothetical) Triassic-era sea monster might have enjoyed playing with...

A strange arrangement of ichthyosaurus bones suggests that a giant (and hypothetical) Triassic-era sea monster might have enjoyed playing with its food, artfully rearranging the bones of the sharks it ate, according to a Boston-based paleontologist. Perhaps it was making a self-portrait. Or maybe it was lonely and wanted to create an imaginary kraken pal.

Found in Nevada’s Berlin-Ichthyosaur State Park, the neatly arranged fossilized remains of nine Triassic ichthyosaurs, Shonisaurus popularis, have puzzled paleontologists for a generation. It wasn’t clear whether these marine reptiles had died from a harmful algal bloom or were maybe stranded in shallow waters. After recent geological evidence suggested they died in the deep, Mark McMenamin of Mount Holyoke College thought about what could have killed them. He imagines it was a 100-foot-long octopus, a mythological kraken, which then rearranged the animals’ skeletons into the oldest-ever self-portrait.

It may sound ridiculous, but this theory, presented at the annual meeting of the Geological Society of America, is in accordance with modern understanding of octopus predation activity. They are known to catch and kill sharks, for instance. And modern octopuses do rearrange bones (and other trash) into seabed middens to hide the entrances to their dens. An arrangement of ichthyosaur bones could have been set up at the entrance to a vast kraken lair, McMenamin theorize.

“I think that these things were captured by the kraken and taken to the midden and the cephalopod would take them apart,” he says in a GSA news release.

In the fossil bed, the ichthyosaur vertebrae are arranged in linear patterns, with what McMenamin describes in a conference abstract as “almost geometric regularity.” The arrangement resembles the pattern of sucker discs on a cephalopod tentacle, the GSA says, “with each vertebra strongly resembling a coleoid sucker.”

The GSA goes on to claim that this might represent the earliest known self-portrait.

This got us thinking about another soft-bodied marine animal that also apparently doesn’t like to be alone. A couple weeks ago, biologists at an aquarium in Queensland, Australia, found some unexpected jellyfish polyps in an empty tank. The tank previously held a lone injured jellyfish, which had died four months earlier. The baby jellies are thought to be clones of their parent, biologists said. 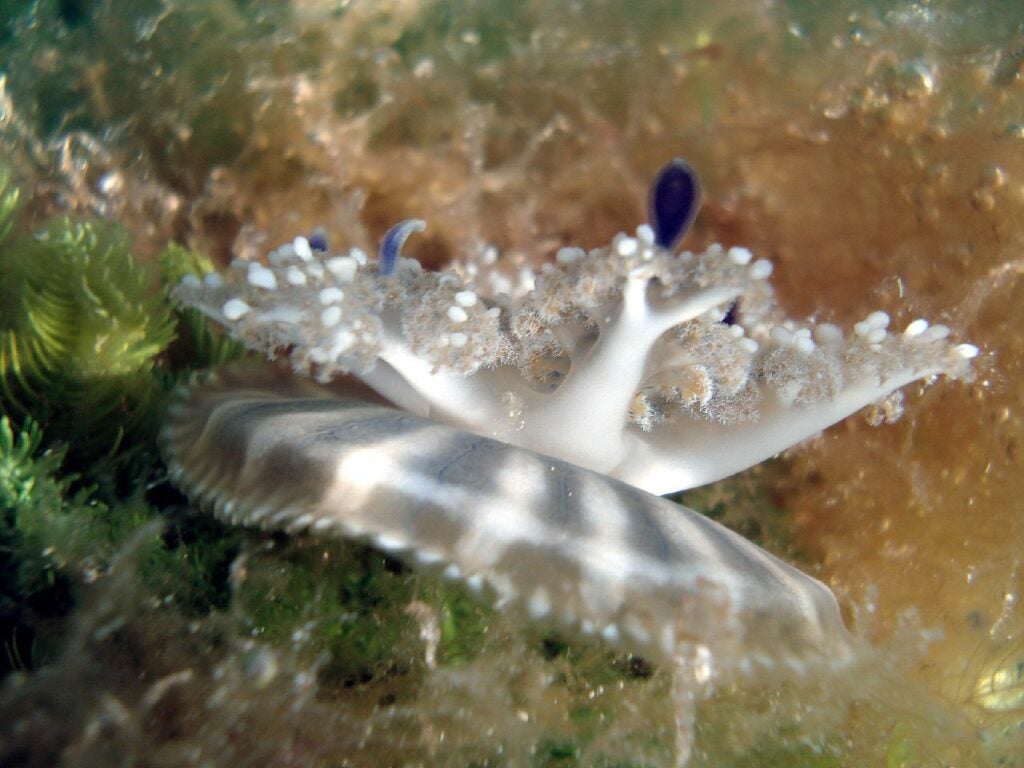 The injured upside-down jelly had some damaged tissue cells, which conceivably could have grown into new offspring, aquarists told the News. So perhaps the hypothetical kraken was just lonely, and, unable to clone itself, it made an artistic rendering of an imaginary friend? It seems possible, although maybe less possible as the imagined kraken.

Modern octopi may be capable of this sort of behavior, but there’s no physical evidence for a Triassic beast. And soft-bodied cephalopods don’t usually fossilize well, so unless McMenamin or others can find a fossilized gigantic octopus beak nearby, the kraken may remain nothing more than a myth.