Could the same thing happen here? 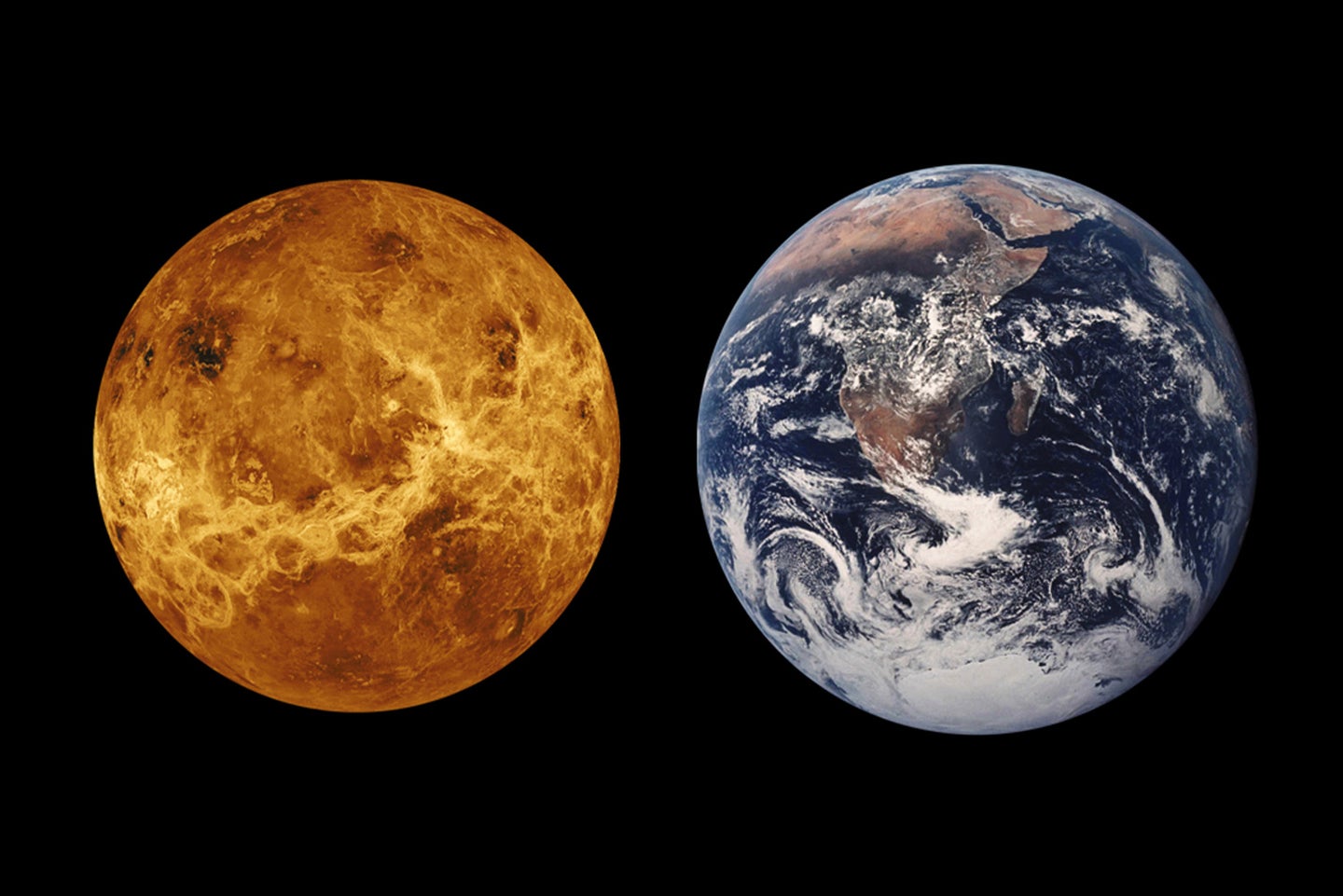 Had Venus drawn slightly luckier tickets in the cosmic lottery, our solar system could host two habitable planets today, according to recent simulations from a group of NASA researchers. Instead, our neighbor is a desolate place—and might give us a terrifying glimpse of our own future.

Planetary scientists have traditionally viewed Venus’s hellish temperatures, carbon dioxide-saturated atmosphere, and congealed crust as the inevitable outcome of its place in the solar system. Sitting too close to the sun, the hapless planet was doomed from birth to be burnt to a crisp. In recent years, however, an alternative possibility has thrown some shade at this simple story. Given the right starting conditions, cloud cover could have protected Venus from the barrage of sunlight and kept it balmy and wet for billions of years, according to simulations presented this week at a planetary science conference in Switzerland. In this scenario, Venus may have actually been the solar system’s first habitable planet… until some unknown catastrophe smothered it in carbon dioxide.

Sound a little too close to home? While our carbon emissions probably couldn’t completely fry the Earth in quite the same way, the transformation of Venus may still hold an important moral for humanity.

“If there was life on Venus, they only had one home,” says Colin Goldblatt, a planetary scientist at the University of Victoria in Canada, “and that home isn’t very good anymore.”

A tale of two Venuses

What keeps Earth alive—in both the biologic and geologic sense—is a difference in temperature between its cool crust and hot core. Cooler rocks sink and warmer materials rise, churning up and down in a way that keeps most of the planet’s carbon locked up in rocky materials deep underground.

Venus failed to maintain this cycle, so today its atmosphere overflows with carbon dioxide. The question is why. According to the traditional story, a warming sun quickly evaporated the young planet’s oceans into the sky, where they formed a dense, stick atmosphere that trapped incoming heat with deadly efficiency. Eventually the surface grew as hot as the interior, which put a stop to the earthquakes and other tectonic activity that had previously helped Venus let off steam. Without tectonic mixing, says Anthony Del Genio, a researcher at the NASA Goddard Institute for Space Studies and co-author of the recent research, the crust became like “a rigid lid that just builds up heat and pressure on the inside until the whole planet blows.”

Heating from the evaporated oceans made Venus blow its top just a few hundred million years ago, according to observations of its young and unblemished surface. Volcanoes erupted across the planet, flooding the atmosphere with carbon dioxide, which in turn made the planet the lifeless rock we see today.

Or so the thinking went.

“[Our] simulation shows that this story doesn’t really hold up,” Del Genio says. The team’s work, which considered five varieties of potential early Venuses, raises another possibility: If young Venus was swimming in water like young Earth was, and if the tides or collisions with nearby bodies slowed its rotation early (two big ifs that are plausible, but unanswered due to a dearth of missions to Venus), it would have developed clouds. And that would have changed everything.

The billowy brightness of cloud cover bounces sunlight back into space, stopping the heating process in its tracks. “Even as the sun gets brighter,” Del Genio says, “if you start with a decent amount of water you get thick enough clouds to keep the planet cool.”

A chill Venus would have held onto its oceans for perhaps billions of years, according to the group’s simulations. That means no steamy atmosphere, which means tectonic plates could keep on sliding around—and keep the carbon underground.

If future probes confirm the assumptions about water and rotation, scientists will need to find a new explanation for what caused Venus to blow its top. Del Genio speculates that a smack from a wayward planet could have done it, or even a random fluctuation in Venus’s internal flows. “Maybe Venus was just unlucky and had something happen to it at the wrong time,” he says.

Whatever their cause, once the worldwide volcanic explosions died down (which took hundreds of millions of years), the planet’s thick envelope of carbon dioxide would keep it from ever becoming habitable again.

Venus: the once and future Earth

Since Venus could have once been Earthlike, there’s no reason Earth couldn’t someday become Venus-like. In fact, a hot, dead Venusian twin is almost certainly Earth’s fate as the sun continues to grow brighter. Fortunately, we’ve got about a billion years to troubleshoot that problem (some have speculated that the gravitational pull of redirected comets could tug Earth farther away from the sun).

But it’s hard to hear about a planet dying after an outpouring of carbon dioxide without thinking about the climate crisis, since digging up and burning fossil fuels is pretty much what Venusian volcanoes did. Here there’s a rare bit of good news: To trigger the kind of ocean-boiling, crust-locking Armageddon Venus suffered, humanity would have to work really hard to burn every available fossil fuel molecule and then some, driving the concentration of carbon dioxide in our atmosphere from around 400 parts per million (ppm) to upwards of tens of thousands.

Then again, says Goldblatt, “it depends how enthusiastic we get about novel fossil fuels.” Goldblatt himself has previously studied the so-called runaway greenhouse effect, where gas emissions would reach a high enough level to turn all our water to steam. That paper concluded that human activity would probably be insufficient to bring us to that particular point of no return, but not that it could never happen. “I’m not saying it’s easy,” Goldblatt says, “but it’s not impossible.”

Still, microbes and cockroaches can respirate easy knowing that humanity probably can’t permanently wreck Earth’s ability to radiate away excess heat. Unfortunately for the rest of us, the threshold for human catastrophe and mass extinction is a lot lower.

Like on Venus, our ultimate fate may depend on clouds. If carbon concentrations reach much beyond 1,200 ppm, preliminary research suggests, we could lose those our fluffy friends and experience double digit warming. “That won’t evaporate the ocean, but it would annihilate us,” Goldblatt says.

Of course, climate change would seriously challenge human civilization long before it struck clouds out of the sky. Climate scientists and policymakers hope to keep warming between 1.5 and 2 degrees Celsius—with carbon concentrations under 450 ppm—to maximize society’s chances of adapting to a warmer Earth.

Although humanity will probably never Venus-ify its home planet, our twin’s hellish state serves as a reminder that there are no cosmic guarantees. If we want any degree of stability, we’ll have to engineer it ourselves—or at least work harder to stop testing Earth’s limits. “A planet just like ours can go wrong,” Goldblatt says. “It is the ultimate lesson why, as a globally dominant species, we have to take care of our planet.”