How to send messages 10,000 years into the future

Linguists, designers, and scientists are scheming up ways to break a language barrier that doesn’t exist (yet). 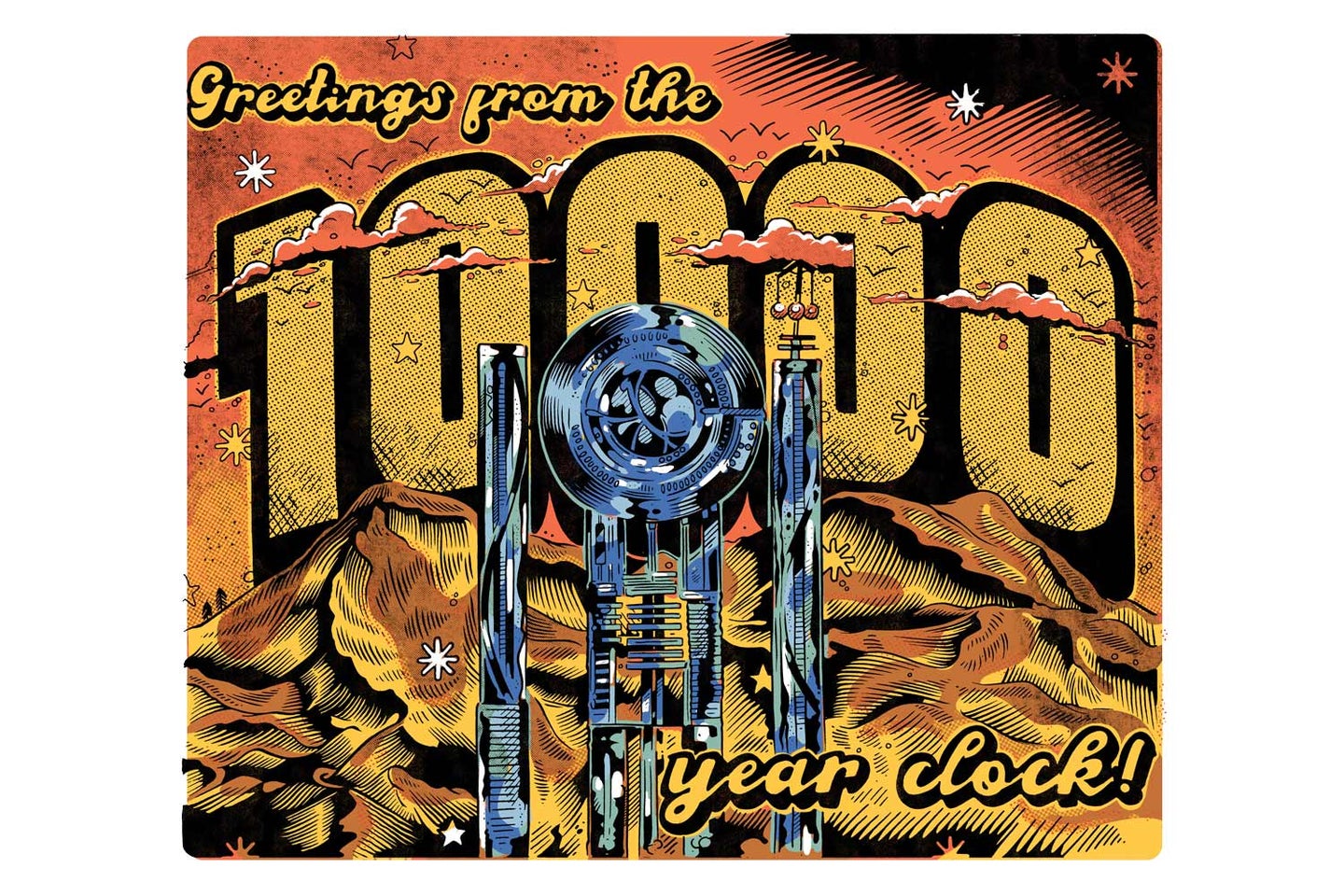 Corroded, wrecked, and half-buried for 2,000 years like an accidental time capsule, the Statue of Liberty that looms over Charlton Heston in the final scene of the original Planet of the Apes is a literal symbol of humanity’s missteps: a horrible communiqué from the distant past about atomic annihilation. In the real world, many linguists, designers, and scientists are puzzling over how to intentionally send millennia-spanning messages to recipients whose languages, senses, and fears could bear little resemblance to our own. The projects these ­forward-​­thinkers dream up aim to convey clues about our existence, hellos to extraterrestrials, or warnings about nuclear waste—like postcards that will be legible to beings 1,000, 5,000, even 10,000 years ahead.

We left a secret message on the moon. Among the roughly 400,000 pounds of human-made lunar detritus is a tiny ceramic wafer on a leg of Apollo 12’s lander; this Moon Museum bears six artist doodles, including a particularly curious sketch of male genitalia by Andy Warhol. In 2021, a team from Carnegie Mellon University plans to send a more comprehensive collection to the surface on a private spacecraft. Their MoonArk houses natural and human-made tidbits inside a protective 8-inch-tall aluminum skeleton. Its four five-sided chambers contain hundreds of ­micro-​­etched artistic renderings and words. There are also literal slices of life: freeze-dried human blood, the DNA of an Arctic tern, and an illustration of a gene we share with songbirds. The setup can survive between minus 280 and plus 260 degrees Fahrenheit, and the lack of atmosphere and moisture on the moon eliminates the risk of corrosion. While the ark displays no instructions on how to use its contents, its designers are fairly certain if another being sees a strange object strapped to an abandoned lander, they’ll be likely to check it out.

Outside Carlsbad, New Mexico, 2,150 feet underground in a salt formation, sits ­America’s atomic garbage can. There, ­defense-​­related radioactive waste like contaminated soil will keep the site glow-in-the-dark-you’re-dead dangerous for at least the next 10,000 years. That’s why the Environmental Protection Agency requires this Waste Isolation Pilot Plant site to clearly mark the zone for whoever happens upon it in the distant future. Since the 1980s, a series of government task forces have considered several potential enduring methods, including an “atomic priesthood,” in which scientists would pass down information about the refuse to their analogs. They also toyed with the idea of creating “ray cats”—­genetically engineered felines that would change color near radiation—to awesomely indicate danger to passersby. In 2004, a third group landed on a proposal to surround the site with a set of 48 ominous granite spires reaching 25 feet to the sky. A monolithic building at the center will house warnings in seven languages, including Navajo. One hiccup they didn’t plan for: No quarry in the world has that much granite. So now the team is considering mixing cement with plastic from the Great Pacific Garbage Patch. Construction should start sometime in the 2050s.

We don’t know for certain if ­intelligent life is out there, let alone if it will reach us before we reach it. If we speak first, E.T. might hear The Golden ­Record, an LP of gold-plated copper that NASA bolted to the Voyagers 1 and 2 probes in 1977. This cosmic hello includes sounds such as a smacking kiss, songs like “Johnny B. Goode,” images NASA converted into audio waveforms, and picto­graphic instructions to access it all. If aliens show up here, Paul Quast, director of the Beyond the Earth ­Foundation, a group focused on safeguarding the planet over deep time, has an idea for a welcome sign. The plan: Affix his “Companion Guide to Earth” to a satellite some 22,400 miles up (in the area of space called graveyard orbit) to serve as a primer on our home. Inside the 1.25-inch aluminum sphere, 16 ­micro-​­etched nickel discs will contain ­vital ­information, including the composition of Earth’s biome and climate and the locations of nuclear ­repositories. (“Don’t dig here; ­oxygen required.”) Visitors will be able to glimpse data on the discs at 100-times magnification or play it back as audio—​which will feature charmers like whale sounds. Illustrations show guests how to mine the trove. On its surface, the orb will also bear a ­topographic map of the world below.

Generations from now, long after Big Ben has crumbled and our calendars have disintegrated, the 10,000 Year Clock will still keep time. Tucked deep in Texas’ ­Sierra Diablo Mountains, this 500-foot-tall mechanical Stonehenge will mark the next 10 millennia. Perched above a series of stainless-steel gears, sun and moon ­dials will plot Earth’s place in space, and a five-​­digit counter will display the year (so, “02019” for 2019). It took ­decades of prototyping by engineers at the ­future-​­planning-​­focused Long Now Foundation to develop a mechanism that could keep the beacon ticking without human intervention. They settled on a thermal generator, which converts temperature changes between day and night into power; its energy transfers to a weight that then swings a 6-foot titanium pendulum every 7.5 seconds. Visitors who happen upon the clock can push a crank at its base, providing the timepiece with a welcome boost and a chance to ring its dusty ol’ chimes.

The sum of human experience won’t fit on a hard drive or in the cloud. Even if it could, those technologies are destined to fail. That’s why Martin Kunze, a cera­micist and self-​­described conservator, is curating submissions for his Memory of Mankind project, a long-term backup of our most important achievements and publicly sourced personal stories. Inside a section of an active salt mine outside Hallstatt, Austria, rest more than 600 7.9-inch-square ­ceramic tiles he’s already ­laser-​printed with scientific papers and love letters, newspapers and photographs. The archive includes, for ­instance, Carl Sagan’s The ­Demon-​­Haunted World and a paper on the first detection of gravitational waves. Ceramic is a hardy choice. Since it’s nonreactive, there’s little that can degrade the material. ­(Archaeologists have dated fragments of Chinese pottery going back 20,000 years.) Each tile holds 50,000 characters of text or 300-​dot-​per-inch color images. But soon they could contain even more. A ­laser-​­engraving technique Kunze developed will write five lines of text per millimeter, allowing each slab to house up to 5 million ­characters—​that’s the equivalent of five 400-page books. Those who submit an image or enough text receive a ceramic token showing the mine’s location. In 20,000 years, the keepsakes might lead someone to a goldmine of stories.

According to the United Nations, half the languages spoken today will disappear by the end of the 21st century. Versions of the Rosetta Disk, like their namesake the Rosetta Stone, should provide enough snippets for future beings to parse long-​gone words and read the written history of our world. Produced in two sizes, one the size of a dime and one the size of your palm, the nickel discs contain bits of up to 1,500 tongues, including ­Mandarin, ­English, and Bahasa. At 1,000-times magnification, the surface of the larger model reveals 13,500 pages of vocabulary and translations of The Bible’s Book of Genesis; among other entries, the coin-size variant houses the preamble to the U.N. Universal Declaration of Human Rights. Inert nickel resists rust and has a melting point of 2,600 degrees Fahrenheit, so each one should last a few thousand years. But its creators—the California-­based Long Now Foundation, a group ­advocating for future-proof ­thinking—​are just as concerned with ubiquity as they are with longevity. They’ve already distributed dozens of the miniature archives, including one the European Space Agency deposited on a comet, and another that SpaceIL and Israel Aerospace Industries crash-​­landed on the moon. The more copies the organization makes, the greater the chance one turns up in the next millennium.

The Hoover Dam was dedicated on September 30, 1935. You’d know this if you could read the 20-foot-diameter celestial map surrounding the base of a flagpole on the wall’s western side. In the late 1930s, artist Oskar J.W. Hansen made the star chart to speak to “intelligent people” in ages to come. His point? To essentially say, We made this. We existed. Here’s how this static timepiece works: The ­compass-​­shaped, art deco map marks the year based on our Pole Star, a northern beacon that gradually changes as the planet moves through space. Right now, that fireball is Polaris; in ancient Egypt, it was Thuban; in some 12,000 years, it will be Vega. The shift happens because Earth has a 23.5-degree tilt, which makes us wobble like a spinning top and changes our ­orientation—​what astronomers call axial precession. Comparing the points of light in the chart to the star hovering over the North Pole lets visitors assess the dam’s age. Made of terrazzo, a composite of crushed marble and cement (same as the Hollywood Walk of Fame), the map could last for at least 2,000 years. That’s also about how long the 726-foot-high ​water-wall should stand.