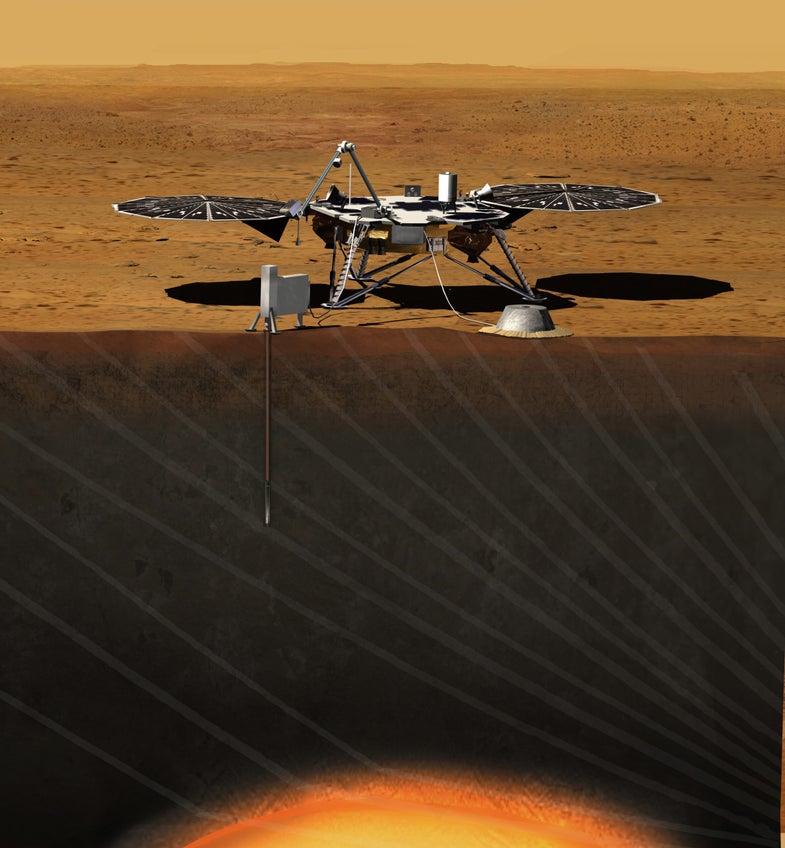 NASA’s next interplanetary mission won’t be a space boat or a comet-hopper, but another mission to Mars, this time with a stationary probe to drill into the planet. The InSight lander could rival the Mars rover Curiosity’s amazing laser in terms of Martian instrument-penetration, drilling 30 feet into the planet’s crust.

The InSight mission — an acronym for Interior exploration using Seismic Investigations, Geodesy and Heat Transport — made the cut for the space agency’s Discovery program, NASA said today. It will be designed and built at the Jet Propulsion Laboratory, just like Curiosity. It won’t need an absurd, heart-stopping sky crane, however — it’ll land on its own feet after it launches in 2016.

The bargain $425 million mission will seek to answer how Mars formed. With Curiosity, Spirit and Opportunity, Phoenix and others, scientists now know a lot about the Martian surface, but not much is known about the planet’s insides. Still no one is sure whether the planet has a molten core, for instance. Opportunity made some measurements this spring that will help, but InSight will get lots more answers. It’s practically a carbon copy of the Phoenix lander, which successfully photographed the Martian snow. Like almost every other Mars lander, InSight is solar-powered. Learn more about it in the video at the bottom.

Earth is the only rocky planet that scientists really know well. Mars’ insides must be different, because it lacks the dynamo that creates a magnetic field, like the one we have here. But the planets are very similar. Mars is a “Goldilocks planet,” according to NASA — it’s big enough to have formed just like Earth, Venus, Mercury and the moon, but small enough that the fingerprint of these internal heating and convection processes still exists. It may have the most in-depth record of this planetary formation process in the entire solar system.

InSight is part of NASA’s Discovery program, which funds (relatively) lower-cost and high-payback missions like Dawn, GRAIL, Messenger and Kepler.

By choosing this new lander, NASA spiked a comet-hopping probe and one of our favorite space exploration concepts, the Titan Mare Explorer. The space boat would have landed on the Saturnian moon and floated around in its methane lakes. Such a mission is far riskier than landing something on Mars, however. NASA, and JPL in particular, are really good (lately) at landing stuff on Mars.

It’s true that Mars is great, we love Mars — but a Titan boat would have been so awesome! Maybe some wealthy asteroid mining entrepreneurs will decide to go ahead and do it.