Construction in orbit will lead to bigger, better satellites. 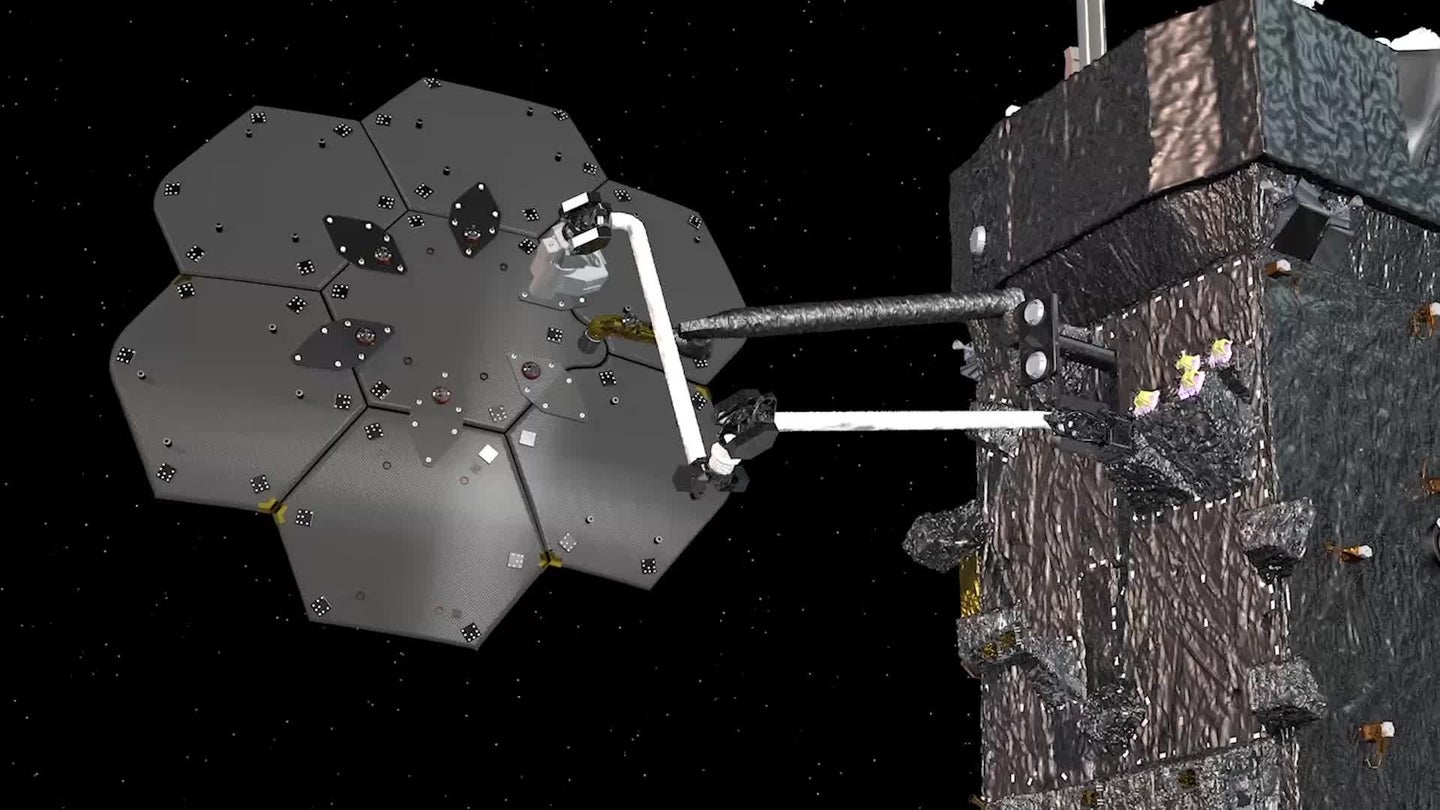 Wherever humans go, they build. Civilization blossomed from clusters of homes and paths, and has more recently swelled to include skyscrapers, power lines, plumbing, and cell towers. And if it is ever to grow beyond the planet, engineers will have to figure out how to build there too.

Designers have long dreamt of the intricate telescopes and roomy hotels they could construct with the equivalent of space-cranes and space-bricks, but—with the exception of the International Space Station (ISS) and the Hubble Space Telescope—every piece of hardware in orbit was built on Earth and crammed whole into a rocket for transport. Now, NASA is encouraging companies to take the first steps toward assembling more complex machines while zipping around the planet in orbit. Last week it announced a $142 million contract to Maxar Technologies to include a robotic arm on an upcoming satellite that will put together a large antenna once in space.

“The development cost that NASA’s helping with is a huge enabler for our industry to be able to start doing assembly in space very affordably,” says Al Tadros, Maxar’s Vice President of Space Infrastructure and Civil Space.

Dubbed the Space Infrastructure Dexterous Robot (SPIDER), the robotic arm will hitch a ride on a minivan-sized satellite called Restore-L around the middle of the decade. Under development since 2014, SPIDER measures about 16 feet long when fully extended, but can twist itself into all manner of contortions using its seven joints, which grant it as much flexibility as a human arm—albeit with a different architecture.

Once in orbit, it will put that dexterity to work. SPIDER will, one by one, remove seven panels stowed alongside Restore-L and fasten them together like a puzzle. Using a rachet-like tool, SPIDER can tighten specialized attachments built into each panel. The partially autonomous arm will pause after each command and organize a photoshoot with mounted cameras and lighting to check that the panels are precisely aligned. “It’s a little bit of a Swiss Army knife,” Tadros says.

The finished product will be a functional, round, 10-foot-wide reflector antenna, similar to the sort that beams down television channels to homes around the planet. Broadband providers currently design their antennas to fit flat against their spacecraft inside a 13-foot-wide rocket. With SPIDER, however, a satellite could build out its own antenna twice that size, allowing it to send more data to more people.

In some ways, Earth is actually a terrible place to build delicate machines. Not only do they have to endure gravity constantly pressing them against the ground, they also have to survive the shaking that comes along with riding a controlled explosion to reach speeds 20 times that of sound. Objects built in space face their own challenges (like temperature swings of hundreds of degrees), but can theoretically grow to any size. NASA chose to fund SPIDER because the technology has such wide appeal, Tadros says, from commercial antennas to scientific telescopes with mirrors four to five times larger than even the upcoming James Webb Space Telescope (JWST).

“The intent is to have unlimited volume,” Tadros says.

And Maxar isn’t the only would-be space construction company NASA is kickstarting. Last summer it awarded a $73.7 million contract to Made in Space, a company that has developed a 3D printer for making custom parts on the ISS, to support its Archinaut One spacecraft. This satellite, which could launch as early as 2022, aims to 3D print two 33-foot beams from which it can unfurl solar panels of unprecedented size for such a small body.

Both missions foreshadow a future where humanity can service and upgrade its space hardware. The main mission of Restore-L, the spacecraft that will carry SPIDER, will be to demonstrate the ability to snag an aging satellite and fuel it up. Tadros envisions fleets of these robotic mechanics hopping from craft to craft, extending their lifespans and maintaining them as we do our terrestrial infrastructure. When Verizon upgraded from 3G to 4G, for instance, it switched out the old antennas for new ones. “You don’t change the cell tower,” he said. “You don’t change the power going out to it, or the access road to it.”

Having advanced robotic arms on hand also gives mission planners more options for improvising when things go south. SPIDER shares its technological DNA with the arm of the Martian Insight lander, another Maxar part. Ever since one of Insight’s instruments failed to properly bury itself in the Red Planet’s unexpectedly tough soil, the arm has been the engineers’ main tool for trying to get it digging again. NASA has designed the JWST to fit inside a rocket by folding up like origami, but the 10-billion dollar telescope will only get one shot at unfolding. SPIDER-like arms could give future space telescopes additional chances to fix themselves if things go awry.

While space repair and construction are technologies that feature prominently in science fiction, real researchers have considered them seriously for decades. Early depictions of space stations were drawn up with the expectation they’d be built in orbit, and NASA originally designed the space shuttle in part to fix up satellites. Indeed, the space agency performed both a satellite refueling experiment and its first retrieval of a defunct satellite on different shuttle missions in 1984.

Establishing a space mechanics corps proved harder than expected and neither practice took off. These days, however, more companies are launching satellites—each costing hundreds of millions of dollars—than ever before. And with more powerful computing, stronger and lighter materials, and smaller devices (such as SPIDER’s cameras and sensors), Tadros suggests we finally have the technology to go make satellites bigger and better. “To get that kind of capability available to a lot of other missions is the real promise of what we’re demonstrating here,” he says.