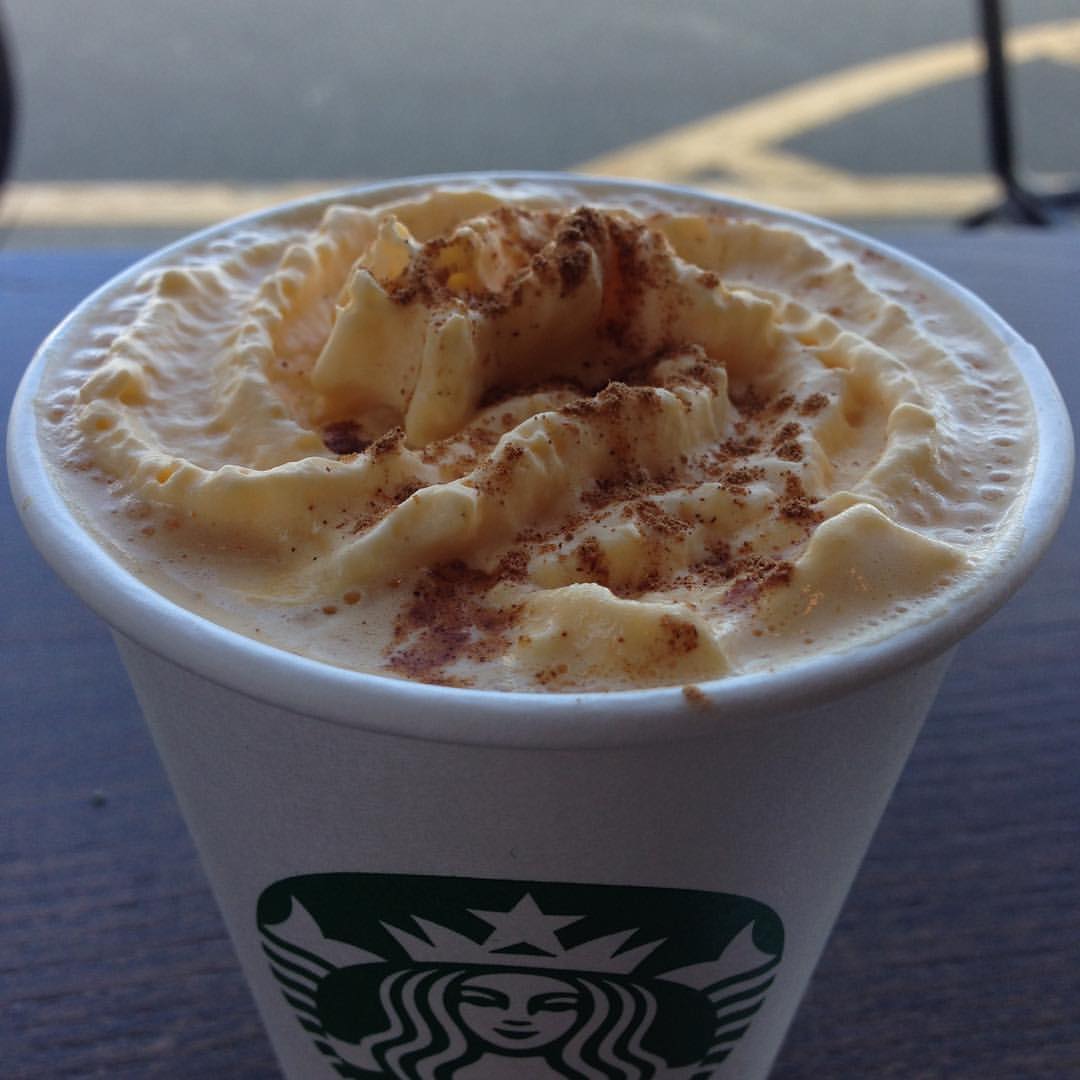 And, according to Starbucks, this year Autumn started on August 27 (the true advent of fall in the northern hemisphere began on September 23), when they officially started selling their warm and frothy seasonal drink in 90 degree weather.

But for all the hype, what actually goes in a Pumpkin Spice Latte is somewhat of an enigma. It’s constituents are surprisingly tricky to nail down. And attempts to pinpoint the exact ingredients in a PSL will lead you on a wild goose chase through the weird underbelly of marketing, secret societies, horticulture, Americana, and emotional branding.

Back in 2003, Starbucks employee Peter Dukes and his team were working on a new project in the company’s ‘Liquid Lab,’ a secure research space in their Seattle headquarters. The team was spitballing about a fancy new coffee drink, meant to capitalize on the change in weather. As the story goes, the team allegedly developed the flavor after drinking coffee and eating pumpkin pie at the same time. Since pumpkin pie’s consistency doesn’t really bode well for mixing into a coffee drink, the team concocted a blend of spices meant to emulate the taste and aroma of the real thing. Once the PSL was born, it took on a life of its own, becoming the first drink to have a verified Twitter account and accumulating an army of unfairly lambasted devotees (some of whom have banded together into the Leaf Rakers Society, a safe secret place to celebrate PSLs and all things Fall).

The Starbucks website provides only a vague list of the current ingredients, which include espresso, whipped cream, milk, “pumpkin spice sauce,” and a blend of pumpkin pie spices.

Nowadays, it’s a well-known um, actually that “pumpkin spice” is something of a misnomer. Expecting actual pumpkin in a PSL is the equivalent of expecting a piece of candy corn to contain an actual corn kernel. It’s not meant to be a Pumpkin AND Spice latte, in theory at least. So for a long time, Starbucks PSLs did not contain any pumpkin.

This makes sense—pumpkins are a fall staple, visually and aesthetically, but they’re not really a fall flavor. (At least, not in America. Many parts of the world enjoy pumpkin year round, sans pomp or circumstance). In fact, according to Starbucks’ website, the PSL was originally going to be called the “Fall Harvest Latte.”

“There’s no practical reason to put pumpkin in a cup of coffee,” says Cindy Ott, author of Pumpkin: The Curious History of an American Icon. Nor is there a logical basis, she says, “to turn this bland-tasting vegetable into a pie, into a dessert.”

So why did Starbucks purposefully add pumpkin? A few years back, people got a bit rattled about there not being enough “pumpkin” in this never-meant-to-include-pumpkin pumpkin spice latte. So in 2015, Starbucks capitulated and added the barest of minimum amounts of pumpkin puree.

It should be noted that pumpkin puree isn’t even made of classic field pumpkins. 100 percent pumpkin puree is mostly a combination of sweeter, hard-skinned winter squashes, like butternuts and hubbards. According to the FDA’s very lenient definition (which was last revised in 1973, though nothing has really changed), anything designated as pure “pumpkin” can contain “articles prepared from golden-fleshed, sweet squash or mixtures of such squash and field pumpkin.”

There’s no botanical difference between a squash and pumpkin, says Ott. Really, the term “pumpkin” doesn’t have any meaning in plant science. In the U.S., the classic pumpkin is just an unofficial variety of round, orange winter squash. Hypothetically, the exact same plant could yield two fruits—if, by virtue of natural genetic variation, one fruit is orange and one is slightly gray, then one is a pumpkin and the other is a squash.

Now, the Pumpkin Spice Latte includes such a small smidge of pumpkin puree that it doesn’t even change the nutrition facts. One heavily-cited fact sheet by food scientist Kantha Shelke sums it up nicely: “The amount of pumpkin puree added does very little other than appease those who wanted to find real pumpkin on the list of ingredients.”

So this latte has very little pumpkin puree, and the pumpkin puree has very little pumpkin. And the puree is only one part of the iconic “pumpkin spice sauce,” aka the bright orange goop that gets pumped into the espresso. The spice sauce also contains sugar, condensed milk, and annatto, which is a pigment meant to give the drink a “natural” yellowy orange color. Squash comes in a variety of colors: gray, white, and green, for example, and you never know what you are going to get. The goop also has salt and potassium sorbate (a preservative).

Orange squash aside, it makes sense that our true cultural association is more with the spices that flavor pumpkin pie. Pumpkin on its own tastes like what it truly is: bland squash. Pumpkin spice is what makes the concoction taste good enough to crave.. The iconic spice blend is a mix of nutmeg, cinnamon, allspice, and ginger. The combo has been used for centuries, but was officially combined and marketed by McCormick in the 1950s.

Unfortunately, if Starbucks made PSLs with 100 percent real spices, that would be a sustainability nightmare. “I don’t believe there’s enough cinnamon, nutmeg, or ginger if all of India or all of China decided today that they were going to have a pumpkin spice latte,” Kantha Shelke told Time in 2014.

So when the PSL is said to be topped with “real pumpkin pie spices” (that’s cinnamon, ginger, nutmeg, and clove), the reality is that only 10 percent of this commercial blend is actually plant-based. The remaining 90 percent is synthetic chemicals and preservatives, containing over 340 flavor compounds. These ingredients are perfectly sufficient to convey the flavor, says Shelke, and “the human brain can fill in the blanks.”

These are some of the compounds included to emulate those classic spices:

At the end of the day, the real star of the PSL is sugar (and artificial flavors), which is why the drink tastes more like a melted candy bar than a winter squash or a spice mix. A 16 ounce Grande-sized PSL has 50 grams of sugar. For comparison, one slice of pumpkin pie has 28 grams of sugar. The whole pie has 188 grams.

But there are plenty of sugary drinks for America to choose from, so why has the PSL taken on such a mythic status? Corn, apples, cherries, and sweet potatoes all have roots in American folklore. But in terms of emotional symbolism, nothing can compete with the pumpkin.

“All this tradition dates back to older traditions,” says Ott, “Dating back to the 19th century, Americans have used the pumpkin to maintain a connection to farm life, even as they moved to cities and office jobs.”

Apparently, it’s classically American to pine after the rustic agrarian days of yore. “No one wants to be farmers, but they like the idea that they’re farmers at heart,” says Ott. The Pumpkin Spice Latte phenom is a good eye-opener about the deep values that people invest in food, she says. Sometimes, “people get caught up in the authenticity of it,” but it’s not the literal presence of pumpkin that matters, it’s the meaning of it.

Basically, there’s no practical reason for people to celebrate and eat pumpkins today. But, clearly, the pumpkin is here to stay, and the fad of the Pumpkin Spice Latte is inextricably tied to this forced nostalgia. Regardless, the wheel of progress never stops, and neither does the Pumpkin Spice. Acknowledging that Autumn is a lot hotter than it used to be (especially when we decide it starts in August), Starbucks has just released its first new pumpkin drink since 2003—the pumpkin cream cold brew.