At long last, NASA’s probe finally digs in on Mars

NASA unsticks its Martian digging probe by whacking it with a shovel. 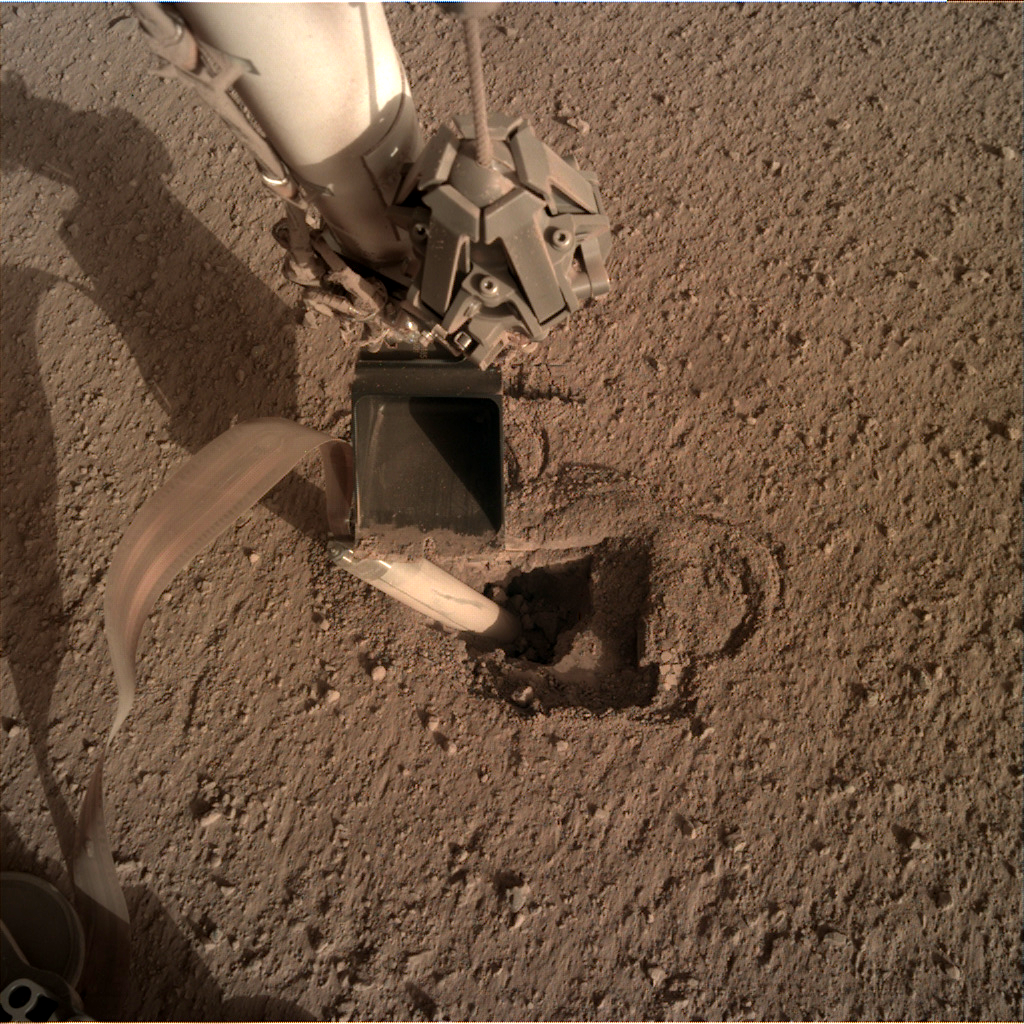 The robotic scoop-arm pins “the mole” against the side of its hole in an attempt to get it moving. NASA/JPL-Caltech
SHARE

Every day, the InSight lander’s suite of instruments sends back data proving that the Red Planet isn’t really dead. Marsquakes rumble the seismometer. Swirling vortices register on onboard pressure sensor. And temperature sensors help track the weather and changing of the seasons.

Despite the lander’s successes, however, one gauge has met with resistance from the Martian environment while trying to carry out its mission. Something has stopped InSight’s 15-inch digging probe, dubbed “the mole” for its burrowing prowess. Instead of diving deep into the Martian sand where it could take the planet’s temperature, it’s been stuck half-buried. An intercontinental team of MacGyvers has spent a year devising successively daring plans to get the mole digging again, but still it flounders on the surface. Now their final gambit—directly pushing the mole into the soil—has shown tentative signs of success, NASA announced Friday on Twitter.

The goal of the mole, which is the measurement probe of InSight’s Heat Flow and Physical Properties Package (or HP3), is to track the temperature variations of Mars itself. This heat comes from Mars’s core, which, like Earth’s core, remains warm from the planet’s birth. By measuring it, researchers hope to learn about Mars’s formation—but from the rod-shaped mole’s current position they can get readings only of the surface temperature. Mission planners hope to ideally reach 15 feet underground to escape the warming and cooling from the Martian seasons that would interfere with reading the planet’s true temperature.

A rock could be in the way, but the more likely culprit appears to be the Martian soil. Previous observations had led the German Aerospace Center engineers who designed the probe to expect that it would be digging through loose sand. They built the mole to bounce up and down like a jackhammer, sinking with each stroke and threading its way around any modestly sized rocks it encountered. But the probe has found soil that seems more dirt-like than sand-like; It sticks together and doesn’t collapse around the mole to give it enough friction to dig. What the mole needs is a little nudge.

“I always thought, ‘let’s ask Mark Watney [the fictional protagonist of the book The Martian] to just go over there and just push a little bit on the mole,’” said Tilman Spohn, the HP3’s principle investigator.

But without any Martian explorers to lend a hand, Spohn and his colleagues on the “anomaly response team” have had to improvise with the only tool available—a small shovel-like “scoop” on the end of InSight’s robotic arm. Over the last year they’ve tried to punch down the walls of the hole around the mole, to fill in the hole with nearby sand, and to give the mole more purchase by pinning it against the side of the hole with the scoop. But to no avail.

In late February, the team moved on to what Spohn calls “plan C.” They positioned the scoop above the mole’s tail and pushed it straight down into the dirt. The move is risky, because a delicate tether that provides power and communications from the lander attaches to the back part of the mole, and a hard whack could damage it. “This is our last resort,” Spohn said in an interview last fall.

But all those earlier maneuvers weren’t in vain, because months of practice have given the team some serious scoop-operating skills, making plan C seem a bit safer than it once did. “We all became more confident that the risk of accidental damage to the tether (with its power and data lines) was small enough to be worth taking,” Spohn wrote on his blog in February.

And so far the move seems to be working. While pressing down with the arm, the operators instructed the mole to dig for 25 strokes, according to a Jet Propulsion Laboratory spokesperson. That’s enough make it to sink down a couple of inches under ideal conditions. Early images suggest that the mole has dug perhaps half an inch, although mission planners are anxiously awaiting more data before they declare the instrument saved.

If the mole really is digging again, the next move will be to push the mole all the way underground. Then the team will harness its hard won “gardening” skills, as Spohn puts it, to collapse the walls of the hole and scrape nearby sand inside, hopefully burying the mole for good. “Both techniques may eventually be used to fill the pit and then allow pressing on the surface of the filled section to provide friction to the Mole below,” Spohn wrote.

The teams expect to learn more about the mole’s position—and fate—over the next few weeks. “If that doesn’t help,” Spohn said, “then I guess we’ll have to conclude that probably there is a stone down there.”

Correction on March 18, 2020 at 2:13pm: The story has been updated with additional information from the Jet Propulsion Laboratory regarding how deeply the mole has dug.