How many people can the planet actually hold?

There's always room for one more. 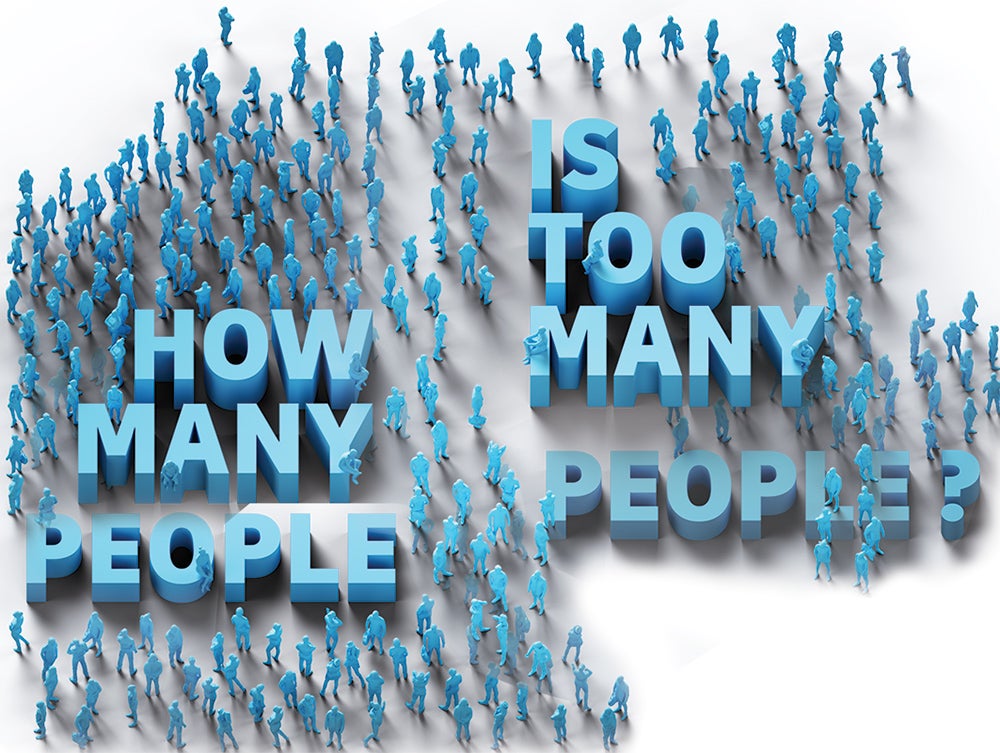 In 1798, English clergyman Thomas Malthus published a slim but provocative volume titled An Essay on the Principle of Popu­la­tion. The book went viral (by 18th-­century standards) for its stunning conclusion that “the power of population is indefinitely greater than the power in the earth to produce subsistence for man.” If people kept procreating, Malthus argued, we’d run out of planet. Two centuries later, scientists are still ­grappling with that possibility.

For most of history, our numbers have been negligible. If Odysseus really did sail the wine-dark sea in the 12th century B.C., he was one of only around 50 million people alive at the time. As Muhammad composed the ­Quran some 1,800 years later, the population was roughly 200 million. But the Industrial Revolution pushed that crawl into a sustained sprint. Our numbers doubled in just 150 years, and Malthus’ world was making room for its 1 billionth member by 1804. How would they eat? What would they drink? Where would they live?

Malthus’ answer was that they wouldn’t; they’d die of hunger and disease. But he was clearly wrong. So the next Malthusian took up his anxious mantle, and the next. In his 1968 book The Population Bomb, biologist Paul Ehr­lich predicted that by 1980, 4.4 billion humans would start to starve en masse. Yet we continued to skirt catastrophe.

There are now nearly 7.6 billion earthlings, a number inconceivable to Malthus, and maybe even Ehrlich. By the 2050s, there will be 10 billion. How will we eat? What will we drink? Where will we live?

The answers seem simple. We’ll eat food. Farmers already produce enough calories to sustain around 9 billion folks. We’ll drink water—we’ve got loads. And we’ll live like one giant New Jersey: If the whole world were packed as densely as the Springsteen state, we could squeeze in about 30 billion. But this E Street Shuffle wouldn’t be easy, and imagining the reality of reaping these resources quickly grows absurd.

Turning the world into one giant slab of suburbia would require the wholesale destruction of existing ecosystems, with tract homes in the Amazon and turnpikes through Yellowstone. Mimicking the densities of more-crowded cities like Paris could cram billions more onto this spinning rock, but all other species would have to go.

Then there’s water: Our world is wet, but just 3 percent of Earth’s H20 is the fresh kind, and only a third of that is easy to get. If we captured and hoarded every single drop, the precipitation that falls over land each year could keep tens of billions hydrated and clean. In real life, of course, we can’t hog all the rain and snow—and even if we could, we’d use 95 percent of it for stuff other than drinking and scrubbing down.

Right now, we use 86 percent of Earth’s fresh water for food alone. It irrigates almonds in the California desert and nourishes cattle in Argentina—areas not naturally suited to large-scale agriculture. Farmers direct 12,000 billion cubic meters to such efforts annually, sucking up ancient reservoirs with giant mechanical straws.

Agriculture also presents a geographic challenge. Right now, the average diet eats up 1.5 acres annually. If we farmed all of Earth’s 37 billion acres—including every mountain and desert—we’d make enough food for 25 billion people. But there wouldn’t be any room left for us to live here, and we’d run out of groundwater long before turning Mount Everest into a cornfield.

We’re not in a position to run out of ­oxygen—the algae that first flooded Earth’s atmosphere with it are actually growing faster in warming oceans, to the detriment of many marine species. But we might not breathe easy after a population boom. In 2018, the World Health Organization reported that nine out of 10 people already live with polluted air.

All these mental gymnastics are why Marco Springmann, a researcher with ­Oxford’s Future of Food program, finds “this population question kind of funny.” Resources are finite but plentiful. The real problem is that our stockpiles aren’t in the right places. Springmann argues a more useful query is how we might live sustainably. How numerous we may become is beside the point; the population may hit a staggering 11 digits in 2050, but Springmann says a ­climate-​change “tipping point” could arrive by 2040. Rising temperatures will change what we can grow, trigger mass migration away from the tropics, and deplete water.

In a 2019 study in The Lancet, Springmann and colleagues described a ­planet-​­friendly diet rich in whole grains and nuts that’s almost meat-free. If everyone adopted it, he says, we could double our population without increasing food-related emissions. The question isn’t how many people we’ll have, but how many carbon footprints we’ll make.

His solutions run counter to our current car-­driving, meat-eating culture. Since 1850, the United States has burned 5 billion metric tons of carbon dioxide, more than the entire European Union. One American’s carbon footprint equals those of five average humans. Our numbers don’t matter nearly as much as our preferences.

Previous doomsdays have passed without incident, but avoiding future calamity is less assured. While Malthus focused on dwindling resources, he overlooked the catastrophe caused by excess. Greenhouse gases helped inflate our ballooning population, and now the whole thing is set to burst. Global average temperatures are on track to reach levels not seen in 56 million years, when alligators roamed the Arctic. There is little doubt Earth will host 10 billion souls by midcentury. And though we’ll survive without ­terrace-​­farming the Grand Canyon, how livable our lives will be remains a coal-dark question mark.