‘Oumuamua isn’t aliens, but it may not be an asteroid either

A new analysis shows the interstellar visitor might not be what we thought. 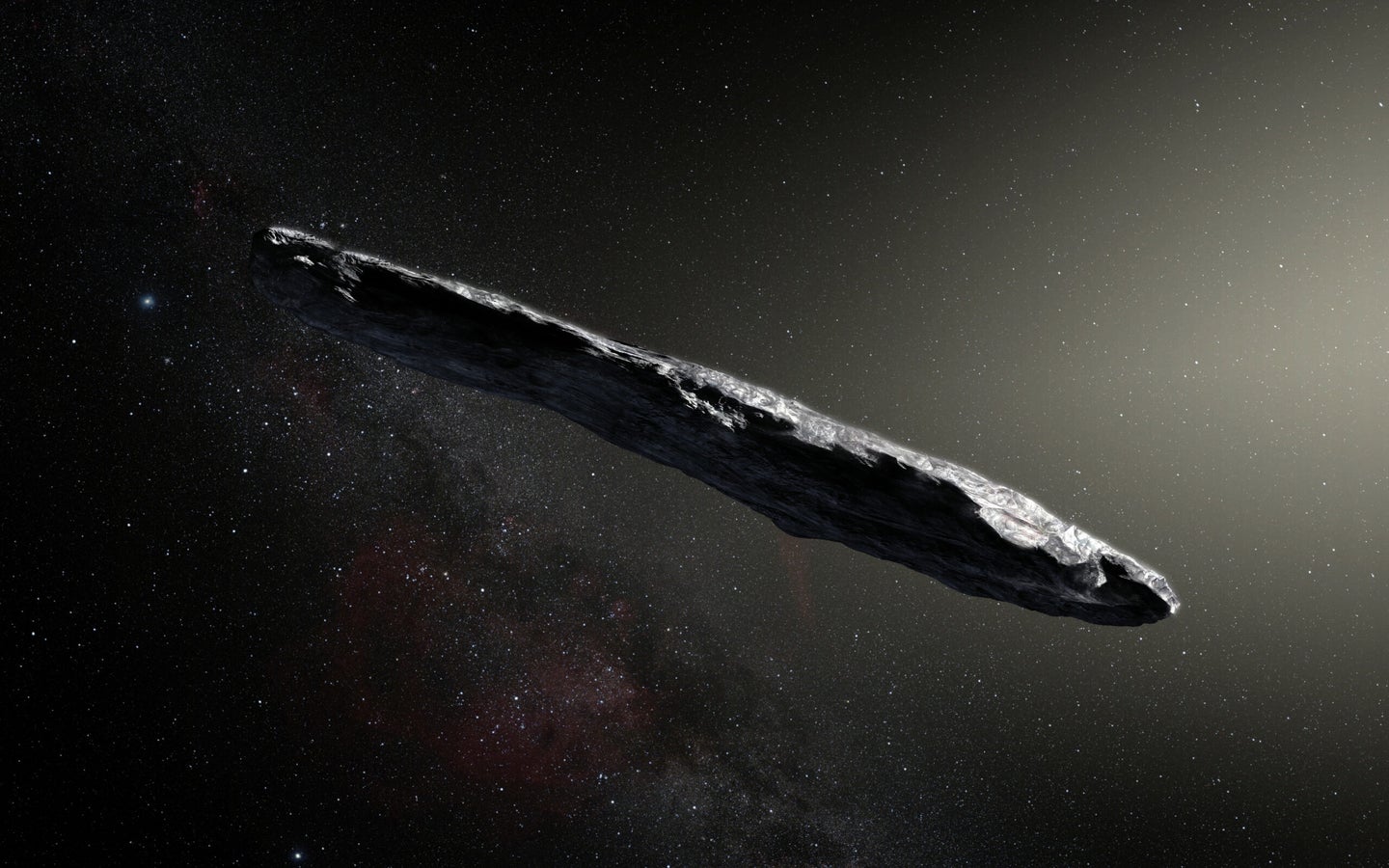 Oumuamua may be made of a fine web of dust rather than rock or ice. ESO/M. Kornmesser
SHARE

Asteroids and comets tend to be heavy, but ‘oumuamua—the first interstellar visitor spotted passing through our solar system—acted impossibly light.

Today, two years after the object receded from sight, researchers are still puzzling over ‘oumuamua’s inexplicable behavior. Too agile to be a rocky asteroid but too dry to be an icy comet, the interloper didn’t fit into either of the usual boxes. The reason, an emerging but controversial theory contends, is that ‘oumuamua could have had a porous consistency that made it so light, even sunbeams could push it around. Now, a new analysis concludes that such a fluffy structure might actually be plausible. While fragile, it might have had the strength to survive its journey without breaking apart.

“It’s not the kind of object that we’ve seen before in our solar system, says Eirik Flekkøy

a physicist at the University of Oslo and co-author of the work, which appeared Monday in Astrophysical Journal Letters. “It’s a completely new thing.”

By the time astronomers noticed ‘oumuamua in the fall of 2017, it was already speeding back out toward the stars. Astronomers pegged it as an odd, cigar-shaped asteroid, until they noticed it was retreating faster than it should have due to gravity alone—behavior unheard of among space rocks, which typically have no other way of gaining speed.

In our solar system, the objects that speed up thanks to something other than gravity are usually comets, dirty snowballs that soften when they swing in close to the sun and get a propulsive boost by spraying a shower of melting ice behind them. Yet ‘oumuamua showed no signs of such a cometary tail, even in a recent retroactive analysis of observations from when it should have been melting the most.

But if icy plumes weren’t driving ‘oumuamua’s speedy escape, what was? One provocative paper suggested that pressure from sunlight itself was pushing the object away, as light particles have billiard ball-like momentum. But considering ‘oumuamua’s assumed heft as an asteroid, it would need a giant flat surface to catch enough of the sun’s rays to get any kind of boost from the barrage of light particles. “There’s not really any plausible mechanism that could form such a thing, except production [by an alien civilization],” says Flekkøy. But if anyone was home they didn’t appear to be hailing us.

In February, however, Space Telescope Science Institute astronomer Amaya Moro-Martín proposed that the sun was pushing ‘oumuamua not because it was flying a massive sail, but because ‘oumuamua was a lightweight.

Neither ice nor rock, the object could be a fluffy conglomeration of dust and ice grains. The researchers refer to this structure as a “fractal aggregate” for its porous patterns that repeat across different size scales. Whether viewed by the naked eye, with a magnifying glass, or under a microscope, a fractal ‘oumuamua would feature holes of many sizes. “I think if you hit this thing it would be a little bit like hitting a spider web,” Flekkøy says.

Intrigued by Moro-Martín’s suggestion, Flekkøy and his colleagues set out to check whether the fractal aggregate hypothesis held up. They noticed that an observed slowing of ‘oumuamua’s rotation supported the theory, because the speed of the slowing fit with a phenomenon where light can push harder on some parts of a surface—such as shinier parts—than it pushes on others. When the object cools after being heated up by the sun, the departure of heat exerts gentle pushes too. All these uneven nudges can add up to make a lumpy object spin faster or slower over time. So if sunbeams could turn ‘oumuamua, the researchers reasoned, perhaps they could speed it up too.

The group also calculated how well the theoretical dust ball would hold together under the duress of spinning (think of how playground roundabouts fling people off) and the sun’s tendency to gravitationally tug harder on ‘oumuamua’s closer side than its farther side. “If this is such a filamentary, porous, fractal structure, would it survive,” Flekkøy says. “And the answer is fairly safely, yes.”

Yet the object’s extreme properties strain the credulity of other researchers. To visibly respond to sunlight over just months of observation, ‘oumuamua would need to be one hundred times less dense than air at sea level, making it even lighter than the lightest materials engineers can produce—substances known as aerogels. “These aerogels we create through very careful technology,” says Roman Rafikov, an astrophysicist at the University of Cambridge. “How do you reconstruct this in interstellar space?”

Models of the early solar system have particles bumping into each other and forming small fractal patterns naturally, but Rafikov questions whether these cosmic dust bunnies could really avoid disruption long enough to grow into ‘oumuamua-like objects. He admits, however, that he prefers the fractals theory to an aliens one, and that he can’t come up with a more likely scenario. “If I had an alternative,” Rafikov says, “I would have published it long ago.”

If dust fractals do get big and occasionally stray close enough to Earth for astronomers to spot them, those observations could tell researchers about the conditions and processes that lead to the formation of planets.

But ‘oumuamua itself has long since disappeared into the night, so astronomers can’t evaluate the dust cloud theory through direct observations. And while a second interstellar visitor is passing through the solar system at this very moment, it looks like a typical no-drama comet. Future passersby, Flekkøy and Rafikov both hope, will be members of the oddball ‘oumuamua family, whatever that family might be.

“In my career so far, ‘oumuamua was the most puzzling object,” Rafikov says. “If [similar objects] actually keep coming into our solar system, we might be better prepared for this kind of analysis.”