Is my drinking normal, or could I be an alcoholic? 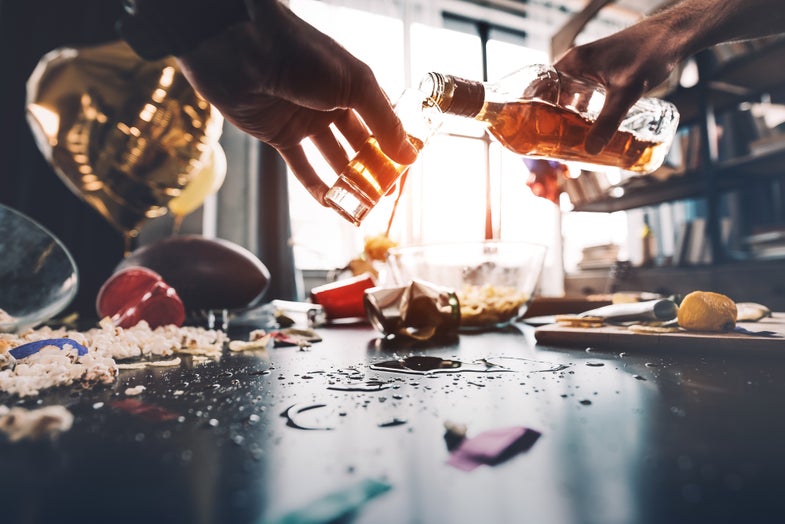 The trouble with alcohol is that it’s everywhere. We don’t treat any other drug the way we treat alcohol, marijuana included, and in part that’s because we mostly don’t think of it as a drug. It’s what you down a shot of to loosen up on the dance floor, or to ease your social anxieties at your company’s holiday party. You know it’s not good for you, sure, but it’s a part of daily life. It’s easy to stop thinking of alcohol like a drug—but it is one. And like any drug, you can become addicted to it without even realizing.

Nearly every group of people in the United States is now drinking more than they did a decade ago. Sure, it’s only 11.2 percent more who are drinking at all, but it’s also 30 percent more who are now high-risk drinkers—the ones who are in peril of becoming dependent. And as for full-on diagnosable alcoholism? That’s up 49.4 percent. This is all from a 2017 study in JAMA Psychiatry that used a massive long-term survey to see how drinking rates changed between 2001-02 and 2012-13. Over 36,000 people took part, each of whom were interviewed face-to-face and asked detailed questions about their drinking habits.

Of all the groups, the ones facing the steepest increases in problematic drinking are women, those with low socioeconomic status, older adults, and racial or ethnic minorities. The increases were so severe across the population that the study authors wrote they “constitute a public health crisis.”

It’s easy to look at those statistics and think that the troubling findings only apply to other people. Other people have drinking problems—I’m fine. And maybe you are—but maybe you’re not. Even if you think your habits are controllable, you should know what problematic drinking looks like and whether you’re more at risk for developing an addiction than others.

“Just like people with risk for diabetes should know they may face trouble, people with potential alcohol problems should realize their problems,” says Marc Schuckit, a professor of psychiatry at UC San Diego specializing in alcohol and drug abuse. “It’s just that people don’t always do self-evaluation like they should.”

More than 50 percent of the risk for alcoholism is heritable, so anyone with a close relative—especially a parent—who has had alcohol abuse issues is much more likely to get into trouble. But genetics aren’t the only risk factor. Depression and other mental health conditions make you more likely to rely on alcohol, as does your social life. Having a close friend or partner who drinks heavily probably makes people liable to over-imbibe as well.

How much is a normal amount of alcohol?

Alcohol dependency is so much more than a particular number of drinks per week—but everyone still wants a number. We want some barometer by which to measure ourselves to see if we’re really that bad. So here it is:

The average male-bodied person should stay below four drinks per night, and consume no more than 14 drinks per week. For female-bodied people, that generally drops to three drinks a night and seven per week.

If you’re regularly going over both of those limits, you might have a problem.

Here’s the part where we get into the nuance. Plenty of people who drink sometimes go on benders and have more than three or four old fashioneds. Way more. That doesn’t automatically make someone an alcoholic. Dependency and abuse are about the regularity with which you drink a certain amount, not how often you come close to blacking out when faced with an open bar at a particularly boisterous wedding. That’s why there are those “ands” in there—because it’s not really about whether you push the limits, but rather how often it is you’re pushing them.

At what point does it become a dependence, medically speaking?

Psychiatrists have a better way of defining alcohol problems than just a numerical limit. For professionals, it’s more about a set of behaviors.

Clinicians use the Diagnostic and Statistical Manual of Mental Disorders (DSM) to diagnose disorders like alcoholism. It’s a book that standardizes what symptoms doctors should look for in every psychiatric illness, or at least all those that are officially recognized. Alcohol use disorder comes on a spectrum, but to qualify as abusing alcohol (which is less severe than alcohol dependence), you only have to have any two of the following issues:

Having two or three symptoms would only constitute a mild alcohol use disorder, while six or more would be considered severe. Of course, you should not use this list to diagnose yourself with alcoholism. Only a licensed professional can do that. But if you answered “yes” to multiple items listed here, you should consider talking to a doctor about it. It doesn’t necessarily mean that you need to go to rehab, or will have to completely cut alcohol out of your life, or even that you’ll have to do much of anything to change your current behavior. But admitting that there’s a problem with the way you relate to alcohol, and asking a professional to help you fix it, is the best way to keep things from getting out of hand later.

What should I do if I think I have a problem?

If you’re concerned, talk to a professional about it. Schuckit recommends the resources available from the National Institute on Alcohol Abuse and Alcoholism. They have options for everything from basic curiosity about where the limits are to phone numbers to call if you’re seeking treatment. They have a feedback form, where you can enter some information about how much you drink and compare yourself to the norm. It’s a basic screening test, but it can help give you a sense of how risky your patterns of behavior are.

There’s also a phone number you can call (301-443-3860) to get more information, including how you can get treatment, plus many more helplines that offer more specialized services. Maybe you’re the child of a person with alcohol dependence and want to help them get treatment, or you want to find a social worker to talk to—you can find both on the NIAAA help page.

The important thing to remember is that you’re not alone. 17 million adults have alcohol use disorder to some degree, and that’s just counting those who have been diagnosed. There are many more who are unable to get help. But the bright spot in all of this is that treatment works. A third of people who seek help have no symptoms a year later, and many of the remaining group still see significant reductions in the severity of their problems.

I’m not drinking enough to be considered high-risk, so I should keep doing what I’m doing—right?

Maybe you clicked through to this article because of a New Year’s resolution—to get in better shape, or be more present during social gatherings, or find healthier ways to deal with stress and depression—or even because you’re dealing with a massive New Year’s hangover.

If you have a hint of an inkling that maybe you should drink less, don’t let a lack of dependency stop you. More and more evidence shows that even moderate drinking is probably bad for us (if you’re wondering where that adage about a glass of wine a day being great for you went, read up on the science here), and, as noted above, we’re drinking more heavily than we used to. Some studies even suggest that this increase in alcohol consumption is leading to a rise in colon and rectal cancers among people in their twenties.

So if you think you could live as rich a life as you do now (or perhaps even a richer one) while consuming less alcohol, the fact that you’re not technically abusing the substance is all the more reason to go ahead and cut down on your drinking: if shifting social norms and bad habits have turned you into the type of person who drinks every single day, try challenging yourself to limit those occasions to three or four times a week. If alcohol isn’t a substance you’re addicted to, this should be no more difficult than forming or breaking any other habit. We have advice on how to do that here—the linked article is focused on convincing yourself to go to the gym every morning, but the basic instructions are the same.

Start by turning your vague goal (I’d like to drink less) into a firm one (I have quantified how much I drink, on average, and would like to cut that in half either by frequency or volume). Think of the habit you’re trying to form as a default “no thanks” response to an opportunity to drink. That doesn’t mean you’ll never drink, or even that you won’t drink frequently—it just means you’ll become a very conscious consumer, and will get into the habit of asking yourself whether the alcohol is truly desired and will fit into your planned limit for the day or week. Then, find a small mental reward. Maybe you can eat some dark chocolate or split a dessert to enjoy a bit of the sugar you skipped in liquid form, or use a habit tracking app to give you a gamefied sense of accomplishment. If you stick with this new routine for at least 66 days, you should be able to change the way you treat alcohol. You might even find that you prefer not drinking at all, or at least far less than you expected. If it’s still a struggle after a couple of months of your new routine, you might want to talk to a doctor—everyone is different, and even if you’re not drinking a high-risk amount, you might still be dealing with an addiction.