Ignorance may really be bliss 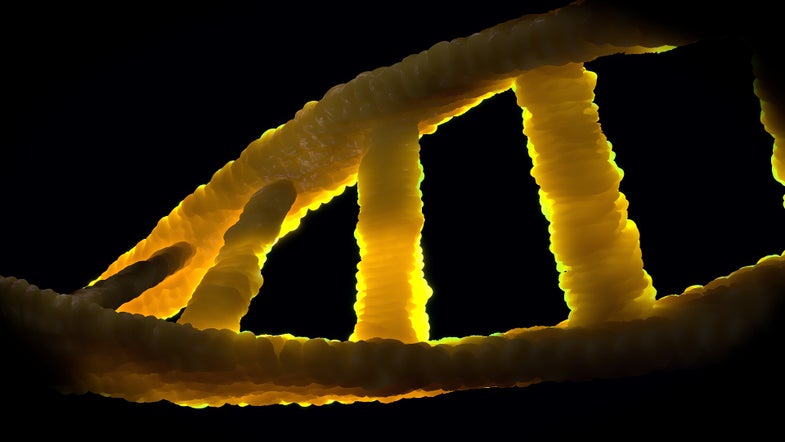 If you could know whether you were likely to develop a debilitating, untreatable disease at age 50, would you want to? 23andMe is offering you that opportunity—but they’re not going to ask you that question. Not really.

23andMe has handed out genetic information like candy (well, $200 candy) for over a decade without much care as to how their customers handle it. True, most of the time they’re selling pretty innocuous stuff. You even get to pick between your basic ancestry kit and the service that includes health information, both presented as “easy ways to discover you.” And in both kits the questions are fairly simple. Do I have the gene that makes me sneeze when I look at the sun? What kind of earwax do I have? Where did my ancestors come from? Those genetic nuggets are easy to digest, and often pretty fun. They probably have little to no impact on your daily life.

But now things are changing. The Food and Drug Administration just ruled that 23andMe—and by extension, other genetic testing companies—can sell you tests that determine your likelihood of something more serious than an unfortunate sneezing habit. Now they can tell you if you’re prone to developing Alzheimer’s or Parkinson’s disease, along with eight other disorders with genetic underpinnings. That’s great news for 23andMe, who have been fighting for years to sell customers this information. It just might not be such great news for you.

The central problem is this: 23andMe aims to give you all the information you want about your genetic background, but they don’t want to be responsible if that knowledge actually impacts you. Are you upset by results that indicate you’re likely to spend the last years of your life dependent on a caretaker, shaking uncontrollably, and losing the ability to speak? Talk to someone else. You’re not 23andMe’s problem anymore. They’re happy to direct you towards the resources you need to find a doctor or genetic counselor to talk to, but beyond that? They’re out. We live in a world where basically anything can be ordered off of an approachable-looking app with little more than a finger swipe, but consumers shouldn’t be lulled into seeking out genetic information with the same carelessness.

Once you know, you know

If all you want to know is whether you have the gene for a hairy back or for smelling asparagus in your pee, the lack of guidance won’t be a problem. You may not be able to do anything about it, but the knowledge is unlikely to haunt you. The same is not true for most of the diseases 23andMe can now test for. For some of them, like celiac disease or Alpha-1 antitrypsin deficiency, you can at least take some precautionary measures based on your results. But what about Alzheimer’s? There’s little you can do to stave off the memory loss, and few treatments to extend your time with loved ones. There’s no predicting when exactly it will strike or how serious it will be when or if it does. The same goes for Parkinson’s disease. Both are debilitating and unpredictable. And yet the real trouble with testing for them isn’t explaining to people that 23andMe’s tests can only tell you your risk, not whether you’ll get the disease. It’s the knowing.

It’s easy to say now, at age 20 or 30 or 40, that you want to know what will happen to you. Maybe you imagine you’ll finally open that bakery you always dreamed of, or you’ll go to the gym five times a week in an attempt to stay healthy longer. And maybe you’ll really do those things. Maybe you’ll live a fuller life. Or maybe, as you’re sitting on the beach on your dream tropical vacation, you’ll think of a future where you’ll have to move into a nursing home because you don’t remember your own son’s name—a future you’re genetically predisposed to. You’ll tell yourself that you don’t know, not for sure. Maybe you’ll never get the disease and you’ll live to the ripe old age of 95, when you’ll die surrounded by generations of your loved ones. But maybe not. You can’t unring that bell.

Take a more extreme example. People who have the genetic mutation that causes Huntington’s disease will inevitably develop it. And although there’s a test that can tell you not just whether you have the mutation, but when you’re likely to get the disease itself, lots of people choose not to know. Knowing changes how you’ll live your life and most people, especially young people, don’t want that burden.

23andMe doesn’t offer a Huntington’s test. It’s not because they couldn’t—they could, in theory—but because they don’t offer “diagnostic testing.” 23andMe performs a kind of genetic analysis that can’t detect some abnormalities, like the genetic repeats that cause Huntington’s or Fragile X syndrome, so since they’re not really in the business of giving out health information, they don’t go any further than their baseline genotyping service. If they were in that business (and had FDA approval), they could take the sample you sent to them and diagnose you with any number of genetic diseases. But that’s not their business—which to be fair, they’ve stated explicitly—and if the results of a genetic test come too close to being an actual diagnosis, 23andMe doesn’t want to be involved. They recommend you go to a physician or to a professional genetic counselor instead, as they should. They’ve drawn a line in the sand. But it’s clearly not drawn for your comfort. 23andMe can’t be held responsible for a test that doesn’t provide a diagnosis—like the test for Parkinson’s, which just tells you that you’re at risk—especially after the all caveats they give you.

They’ll warn you that the results aren’t 100 percent accurate, that they can only tell you your risk, that genetic indicators don’t always translate to traits. But they’re selling you a product. You won’t buy it if you feel anxious about the results or afraid of what the knowledge might bring. So they’ll show you stories about people who found their birth parents through their service or discovered the real cause of their lifelong ailments. Look at how happy these people are! And the vast majority of people will be happy with their results, because these diseases are rare. Most will get to rest easy knowing they probably won’t develop a degenerative disease. But some won’t get that reassurance. And if a company is going to sell customers their right to know, they should have to provide help when that knowledge hurts.

In case you needed more reasons to ditch 23andMe, here are two: First, their genetic tests may be approved by the FDA, but no screening test in the world is right all the time. Even if they get it spot on for 99.9 percent of all people (the actual accuracy and specificity are nigh impossible to find on their site), that means one in 1000 people will get the wrong result. 23andMe already has over a million customers, which means potentially 10,000 people have gotten false information—even given that generous hypothetical error rate. So you’re not just risking living with a terrible burden on your mind—you’re risking doing so because of a false positive.

And though the $200 price tag may seem like a lot, that’s not actually where 23andMe makes its money, nor is it their ultimate business plan. One board member told Fast Company that “The long game here is not to make money selling kits, although the kits are essential to get the base level data.” The product isn’t really a kit, then—the product is you. With a massive database of genetic information, the company can turn around and sell that data to other companies. Plenty of those companies are doing scientific research that can only be done with access to large amounts of genetic information. Even government agencies like the National Institutes of Health use the data to better understand the hereditary causes of diseases. And besides, 23andMe assures customers that if you consent to share your genetic information with third parties, your data will be anonymized and aggregated “so that you cannot reasonably be identified as an individual.” Of course they would never, ever break that rule. Except that even if they don’t, it turns out you can find out a man’s last name using only the short repeats on his Y chromosome and access to a genealogy database. Oh, and then you can identify his age and which state he lives in using publicly accessible resources. But other than that, it’s totally anonymous.

So if you want to find out whether your genes give you an affinity for sweetness or unusual finger length ratios, go right ahead. Just know what you’re getting yourself into. It’s all fun and games and genetic preference for bitter foods until someone finds out they might get Parkinson’s. Happy testing, everyone.

This article has been updated for clarification.