Is Trypophobia a Real Phobia?

We investigate the fear of creepy clustered holes 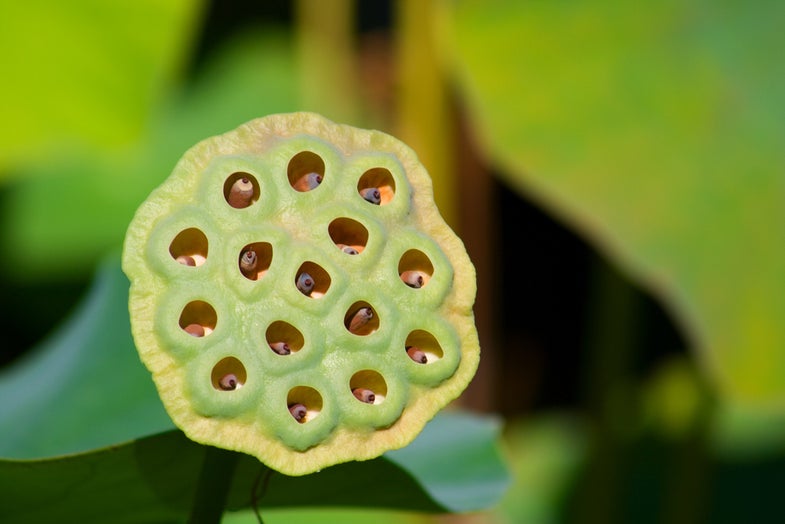 If you’re like me and you have a visceral reaction to the image above—if it makes your skin crawl, your hair hurt, and your stomach turn—you can count yourself among the trypophobic. According to its Facebook page, which is more than 4,000 members strong, trypophobia is fear of clustered holes. It is usually small holes in organic objects, such as lotus seed heads or bubbles in batter, that give trypophobics the extreme willies, triggering reactions like itchy skin, nausea and a general feeling of discomfort. (A picture of a candy bar with a pattern of small air bubbles did me in. Goodbye, dear chocolate. For now.)

Scroll through the gallery below to see some photos that may trigger your latent trypophobia.

My editor tasked me with investigating what causes this bizarre and irrational fear, which I had never heard of before.

It turns out that I’m not alone. I contacted roughly 10 psychologists for this story, and of those who got back to me, none had heard of it. The evolutionary psychologists I emailed were unwilling to speculate on the potential biological underpinnings for a fear of small, clustered holes. Trypophobia is not an official phobia recognized in scientific literature. For many (though perhaps not all) who have it, it’s probably not even a real phobia, which the American Psychiatric Association’s Diagnostic and Statistical Manual of Mental Disorders says must interfere “significantly with the person’s normal routine.” Having just looked at a bunch of holey pictures and videos, I’m severely grossed out, but I can still write this story.

Although this may be of no comfort to those who suffer from it, trypophobia is simply one of an infinite number of fears that people experience, some more idiosyncratic than others. The online Phobia List, run by an amateur etymologist, contains the names of hundreds of fears, from the well-known (fear of heights: acrophobia) to the fringe (fear of the great mole rat: zemmiphobia). Trypophobia hasn’t made the list yet.

According to Martin Antony, a psychologist at Ryerson University in Toronto, past-president of the Canadian Psychological Association and author of The Anti-Anxiety Workbook, with the exception of a few terms (agoraphobia, claustrophobia and arachnophobia among them), professionals who study and treat phobias tend not to use all the Latin and Greek names that get tossed around on message boards and in the press.

Antony wasn’t surprised to hear that some people have an intense aversion to clustered holes because “people can be afraid of absolutely anything.” The factors that contribute to fears and phobias include traumatic experiences (getting bitten by a dog leading to a fear of dogs, for example), observational learning (watching others be afraid of heights), information and instruction (learning to fear being alone in the dark after watching too many horror movies), and various biological factors (like an inherited predisposition to anxiety). “Although the studies on causes of fears have all focused on more common ones, such as spiders and snakes, there is no reason to think that different factors would be responsible for more unusual fears, Antony says.

Trypophobia may also be catching. An element of so-called emotional contagion seems to be at work on Facebook, where some group members say they didn’t realize they were trypophobic until they started reading others’ comments and clicking on the pictures. “It’s not unusual to laugh harder at a funny movie if others around you are laughing,” Antony explains. “In the same way, we may be more likely to experience fear in a particular moment if others around us are fearful.” For me, however, all it took was a verbal mention of a “fear of small holes” to illicit a shudder. I became disgusted before looking at a single gnarly image of a skin graft or lamprey eel (look ’em up) or reading an online comment. I also immediately assumed that we were talking about biologic objects—holes in wood, in particular. Clearly, in me the fear was preexisting.

One trypophobic reported on Facebook that her fear stems back to childhood, when she had a Renaissance Faire dagger with a handle covered in little holes. Another member wrote: “I was stung by a bee in high school on my outer thigh. I had an allergic reaction, and my skin started to swell. The swelling was so bad, I could see each individual pore on my leg and I freaked out. Since then, I have not been able to look at clusters of holes without getting the heebie-jeebies.” Just. Gross.

Fear and disgust often go hand in hand, Antony says. “Evolutionarily speaking, almost all of the things that arouse a strong disgust-reaction–spiders, mice, blood, vomit–are things that could have been triggers for fear of illness.” Perhaps the same could be true for little holes, especially in natural objects where they seem particularly out of place. I suspect that we’re disgusted by pockmarked objects because they don’t look quite “right”; these perceived deformities signal danger, which we manifest as revulsion. But then again, a fear of asymmetry (another form of things looking not quite right) in some people with obsessive-compulsive disorder is not associated with disgust, Antony says. Perhaps holes, particularly in organic objects, subconsciously remind us of the symptoms of contagious illnesses that affect the skin, such as the rash or blisters associated with measles and chicken pox, respectively. All of this, of course, is speculation, and just goes to show how little we know about trypophobia.

Masai Andrews hopes that will change. Andrews, who runs Trypophobia.com, founded the Facebook group page in 2009 when he was a sociology minor at SUNY-Albany. “I started the website and Facebook page because I suspected this was a very common phobia and I wanted a place where people could compile information,” Andrews says. “It is my hope that one day the academic and scientific communities will, at the very least, acknowledge the aversion to holes and certain patterns.”

When that happens, a Wikipedia page dedicated to the fear should follow. Surprisingly, one doesn’t exist today. “I can barely keep a page up on the subject without it getting taken down,” Andrews says. In March 2009 the powers that be at Wikipedia determined trypophobia to be a “likely hoax and borderline patent nonsense.” The deletion page also says that Wikipedia is “not for things made up one day.” As for who actually made the word up, that distinction probably belongs to a blogger in Ireland named Louise, Andrews says. According to an archived Geocities page, Louise settled on “trypophobia” (Greek for “boring holes” + “fear”) after corresponding with a representative at the Oxford English Dictionary. Louise, Andrews and trypophobia Facebook group members have petitioned the dictionary to include the word. The term will need to be used for years and have multiple petitions and scholarly references before the dictionary accepts it, Andrews says. I, for one, would prefer to forget about it forever.

Want to find out if you’re trypophobic? Take this quick visual test. But beware: You may be skipping lunch today.