This Is The Molecule Responsible For Stress

Now scientists can create drugs to fit inside its structure precisely. 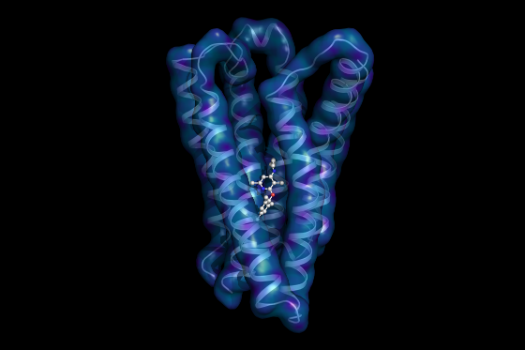 Researchers from Heptares Therapeutics, a drug company, have discovered the 3-D structure of a protein receptor that mediates our response to stress, according to a new study in Nature. Using a powerful X-ray machine at Diamond Light Source, the UK’s national particle accelerator, they were able to detail the structure of CRF1, a find that they say opens up the possibility of creating specially tailored drugs to treat depression and anxiety.

CRF1, a molecule on the outside of cells on the pituitary gland, releases CRF, hormones involved in regulating our stress response that over time contribute to anxiety and depression.

A vital aspect of the discovery is that the receptor has a small binding pocket located in a much different position than other G-protein-coupled receptors, (GPCRs). Knowing the structure of Class B GPCRs like CRF1 could potentially help researchers develop drugs that better target receptors within the same family, Heptares claims. Scientists could just design a drug that pops right into that pocket.

“The finding that the structure of CRF1, a Class B GPCR, is completely different to previously solved Class A receptors confirms why Class B receptors could not previously be modeled for the purpose of rational drug design,” said Fiona Marshall, Chief Scientific Officer for Heptares, in a press statement. “Now we know its shape, we can design a molecule that will lock into this crevice and block it so that CRF1 becomes inactive–ending the biochemical cascade that ends in stress,” she later told the Sunday Times. The company says it could possibly also lead to targeted drugs for Type 2 diabetes and osteoporosis, since those diseases deal with receptors of the same class and structure.

The discovery is detailed online in Nature this week.