3 Ways To Save Psychotherapy

People have been turning away from psychotherapy in favor of medication for years, despite the evidence that therapy works. Here are a few tips for improving the industry's image. 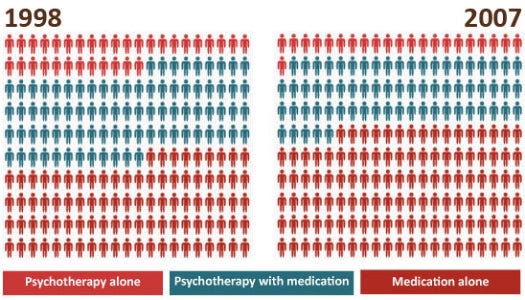 The subtle art of lying on a therapist’s couch is in rapid decline. Psychotherapy, the traditional one-on-one weekly session with a therapist, has been on the downswing for years, as more and more psychiatrists and even primary care doctors prescribe psychotropic medications instead of therapy. As the graphic above illustrates, between 1998 and 2007, psychotherapy use for people being treated for mental health conditions in the U.S. decreased from almost 16 percent to 10.5 percent, and therapy use in conjunction with medication went from 40 percent to 32 percent. By contrast, usage rates of medication alone shot up from 41 percent to a little more than 57 percent.

The decline in popularity of traditional talk therapy isn’t because seeing a therapist for depression or anxiety doesn’t work. In fact, the evidence points to the fact that it does work, more effectively and for longer stretches of time than psychotropic drugs. Brown University professors Brandon Gaudiano and Ivan Miller, who edited November’s Clinical Psychology Review issue devoted to the topic, write in a review that “psychiatric treatment guidelines tend to be biased toward promoting medications and underemphasize the role of psychotherapy as a frontline treatment,” even when the research indicates it should be.

As with most things in healthcare, it often comes down to money. The authors explain:

there are strong financial disincentives for psychiatrists to provide medications compared with evidence-based psychotherapies. For example, a psychiatrist can bill up to four patients for pharmacotherapy (15 minute medication check visits) compared with one hour-long psychotherapy session. It is not surprising, then, that surveys show that fewer and fewer psychiatrists provide psychotherapy. Also, most patients are being treated by primary care doctors who rarely offer psychosocial treatment alternatives.

So how will traditional clinical psychology save itself from extinction? Here are a few (semi-serious) ideas to consider:

We’ve seen how powerful “Big Pharma” can be. Pharmaceutical companies have immense resources to draw on while lobbying for and advertising their drugs. Psychotherapy has no equivalent. “There is no ‘Big Psychotherapy’ devoted to developing, testing, and promoting psychological interventions as there is with pharmaceuticals,” the authors write.

2. Get Yourself A Cute Commercial

Once psychotherapy advocates have a little bit of a cash cow to play with, they can go on a marketing spree. Big-name depression medications like Zoloft have cute commercials full of sad, adorable anthropomorphic lumps that pop a (brand-name) pill and suddenly start seeing the world in color again. Sitting at home on the couch, we say, “aha, I want that too!” and then rush off to ask our doctors for drugs.

“The pharmaceutical industry spends upwards of $5 billion per year in the United States on [direct-to-consumer advertising],” Gaudiano and Miller write. The U.S. and New Zealand are the only countries that allow this type of medical advertising. “Research suggests that patients’ requests for specific medications increase prescriptions received and can lead to unnecessary or inappropriate treatment.”

Well, it’s time to fight fire with fire. Therapy can look fun on TV, too! The American Psychological Association has started a video campaign touting the benefits of psychotherapy. It’s a sassy retort to the quick-fix medication mentality. Psychotherapy needs to get itself a marketing campaign, and here’s a start.

Over the years, there’s been a push to explain mental health problems in biological terms. To reduce the stigma of illnesses like depression and schizophrenia, mental disorders are cast broadly as diseases in the brain caused by chemical imbalances.

While it’s important to reduce the stigma associated with mental illness, this approach might not actually work at all. In fact, it could be making things worse, as Guadiano and Miller explain:

The push to medicalize mental health (i.e., promoting a “disease” model) has, not surprisingly, appeared to reinforce the notion of “differentness” which is not effective for reducing stigma and can, in fact, increase it. For example, biological explanations appear to lead to attributions of lack of self-control, dangerousness, and unpredictability, thus producing the desire for increased social distancing.

Instead, they argue, these campaigns create a perception that mental health disorders can only be treated with intensive treatments like medication. “Talking it out” with a therapist doesn’t sound like enough anymore. As another article in this issue of Clinical Psychology Review by psychologist Brett Deacon points out, this mentality has spread even among mental health professionals:

The 2009 [National Institute of Mental Health] brochure on OCD provides a representative example. Consumers are encouraged to seek help from a doctor who may prescribe antidepressant, antianxiety, and/or beta-blocking medications; doctors may also provide a referral for “talk therapy.” Promoting medication as the preferred treatment for OCD and relegating psychotherapy to adjunct status is surprising given that NIMH-sponsored research has shown a form of “talk therapy” known as exposure and response prevention to be more effective than pharmacotherapy in the treatment of adults with this disorder.

Deacon’s advice? Stop searching for a reductionist, purely biological explanation for psychological phenomenon. “It is implausible to expect any one explanation (e.g., neurotransmitter dysregulation, irrational thinking, childhood trauma) to fully account for mental disorders,” he writes. “No portion of the biopsychosocial model has a monopoly on the truth.”