A Chinese folk contraceptive could give rise to unisex ‘molecular condoms’ 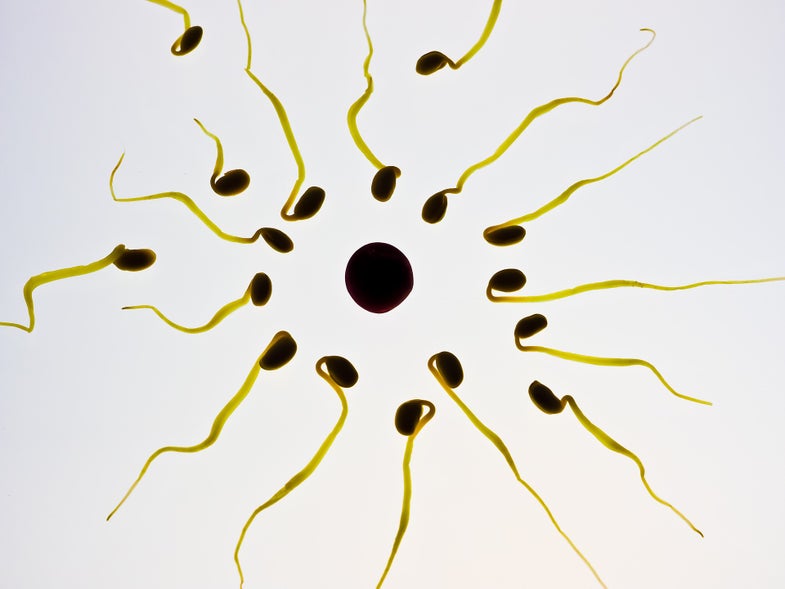 Imagine: You’re a sperm cell just trying to complete your life’s greatest seminal work—fertilizing an egg cell. You’re swimming up a reproductive track, your lil tail steadily swishing back and forth as you finally approach your target. Now it’s time to push through the final stretch. After fusing with the outer layer of the egg cell, you have to push through its protective barrier to beat a couple hundred of your buddies and be the first to get yourself inside. But it’s okay, you were born for this moment. A boost of calcium to your tail will turn its gentle swish into a frenzied whip-like movement, allowing you to drill through the egg’s defenses. The hormone progesterone is key to opening the floodgates; it binds to an enzyme in your plasma membrane and triggers a calcium channel called CatSper. And lucky for you, the reproductive track of an ovulating female is chock-full of the stuff.

But something goes wrong. At what should be a moment of triumphant cellular penetration, your tail stays flaccid. Without that calcium-induced kick, you’re left flailing in a futile attempt to drill into the egg.

Sorry, sperm: you’re no match for pristimerin. The naturally occurring plant compound isn’t a hormone, but it’s similar enough in shape to progesterone that it can bind to the same receptors, preventing the other molecule from doing it’s job.

“The compounds are very potent,” Nadja Mannowetz of the University of California, Berkeley told PopSci. “You don’t need a lot to block the reaction.”

Along with Melissa Miller and Polina Lishko, Mannowetz recently tested the effects of several hormones and a couple of plant compounds on CatSper to better understand how this crucial step in fertilization works—and how we might prevent or encourage it. Their findings were published this week in Proceedings of the National Academy of Sciences.

The researchers exposed sperm to testosterone, estrogen, and cortisol, which goes up during times of stress. Testosterone and estrogen were obvious choices—they’re the most important sex hormones in biological males and females, respectively—and cortisol was picked because stress is known to negatively impact fertility, but the reasons why aren’t well understood. All three chemicals competed with progesterone for the crucial calcium channels, diminishing sperms’ ability to whip their tails back and forth. But unsurprisingly, only testosterone and cortisol had this effect at the levels one would normally find in the human body: high stress levels and an unusual level of “male” hormones might hinder fertilization in this way, but estrogen, which peaks in the body just before it starts producing more progesterone, shouldn’t cause much trouble.

More research is needed to know just how much of a problem these hormones cause, and at what levels, in a real human body trying to get an egg fertilized. But Mannowetz and her colleagues didn’t stop there: in the course of their research, they found that pristimerin, a non-steroid chemical found in the plant Tripterygium wilfordii, had a molecular structure that seemed suitable to fit into the same slot as progesterone. And it’s already been used as an anti-fertility drug. The so-called “thunder god vine” is used in traditional Chinese medicine to treat arthritis and other auto-immune inflammation ailments, but it’s known to make users less fertile as well. The plant itself can be highly toxic, and its side-effects and benefits haven’t been studied too thoroughly, so it’s not advisable to go running to a health food store hoping for a quick over-the-counter contraceptive. But when it comes to exposing sperm in the lab to pure doses of pristimerin, the effects were pretty clear. The researchers saw similar results with lupeol, a compound found in mango and dandelion root.

“Because these two plant compounds block fertilization at very, very low concentrations—about 10 times lower than levels of levonorgestrel in Plan B—they could be a new generation of emergency contraceptive we nicknamed ‘molecular condoms,'” Lishko said in a statement. “If one can use a plant-derived, non-toxic, non-hormonal compound in lesser concentration to prevent fertilization in the first place, it could potentially be a better option.”

Mannowetz is optimistic that the plant compounds will prove to be safe. In fact, she and Lishko have a patent pending for their use.

“We are convinced that the substances are non-toxic,” she told PopSci. “Sperms are highly susceptible to toxic substances, and you can immediately see if the cells are feeling well, if they’re still moving. Even at higher concentrations, the sperm still seem to be feeling really, really well.”

The hope is that, since these chemicals aren’t hormones, they might not have the same side effects as hormonal birth control. The high levels of hormones in female contraceptives often cause minor to moderate side effects like weight and mood changes, and can sometimes even prove fatal by increasing the risk of blood clots and embolisms. But when asked whether pristimerin’s ability to trick a sperm’s hormone-seeking calcium channel might pose a problem elsewhere in the body, Mannowetz admitted they’d have to study those possibilities further.

“That would also need further studies, because it’s absolutely true that [the affected protein] is not only expressed in sperm cells, it’s present in many other types of tissue,” she said. So while the chemicals hold promise as potentially carrying fewer—or at least different—side effects than traditional birth control, we’ll have to wait and see. The researchers will also have to make sure that the chemicals don’t damage fertility in the long term or cause harm to any future fetuses.

The next step is to work with reproductive tissues from rhesus monkeys, then to conduct in-vitro experiments where female monkeys are inseminated with and without the plant compound treatments. There’s a lot of work to be done before they can even start testing this as a therapy for humans. And they’d also need to find a better way of producing the anti-fertility chemicals, which are too expensive for a mass-market drug when they have to be extracted from wild plants.

But there are valid reasons for pursuing these “molecular condoms”. Anti-abortion activists often argue that because some contraceptives occasionally prevent fertilized eggs from implanting in the uterus, they actually “abort” a life. This argument has been used to restrict access to healthcare. Because these plant compounds would, in theory, only work by preventing all fertilization in the first place, they might be less controversial (though this may be a bit of a stretch, since the evidence that existing methods of birth control prevent implantation of a fertilized egg more than incidentally is pretty thin).

More importantly, Mannowetz and her colleagues suspect that the chemicals might work as a unisex birth control. If you’re a person with sperm, you could take it to cripple those swimmers and keep them from fertilizing an egg. If you’re a person with eggs, you could take it to turn your reproductive track into a slow lane for any sperm it encountered. The search for a male birth control pill has been long and slow, so the invention of a his-and-hers-and-whoever’s contraceptive would be a welcome development.