Sufferers of the "Truman Show" syndrome imagine a world where everyone is watching them. And they're just barely wrong. 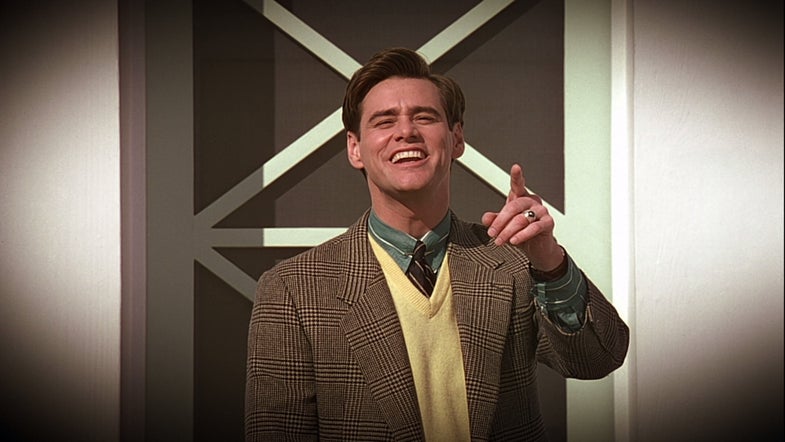 What do you do when delusions and paranoia look an awful lot like the real world?

That’s at least one question raised by a New Yorker article out this week on the “Truman Show” syndrome (pay-walled online, but worth shelling out the money for a print version), where people are convinced they’ve somehow woken up famous, the stars of a worldwide reality TV show. The name comes from the 1998 film, where that exact thing happens to Jim Carrey.

The author, Andrew Marantz, tells the story of Nick Lotz, who suffers from the delusions:

Suddenly, Lotz solved the puzzle of his life. Since starting college, he had been the star of a reality-TV show. The network had kept the cameras hidden, as in “Candid Camera” and “Punk’d.” That night was supposed to be the finale. All he had to do was call his father, who’d find him in the crowd, lead him onstage, and present him with a check for a million dollars. Lotz took out his cell phone, but he was too strung out to place the call. It was too late–he’d missed his chance to make the cameras turn off.

“Truman Show” syndrome is a new phenomenon, but delusions of its type are not. People have always imagined things that aren’t real–our culture just changes what those things are. Marantz explains:

Shifts in technology have caused the content of delusions to change over the years: in the nineteen-forties, the Japanese controlled American minds with radio waves; in the fifties, the Soviets accomplished this with satellites; in the seventies, the C.I.A. implanted computer chips into people’s brains.

And today’s delusion-fuel? Take your pick of the Kardashian sisters, then compound it with a dose of the latest NSA revelations. The resulting delusions aren’t real, but they certainly aren’t random: they’re a half-skip past reality, a snippet of the world taken and blown out of proportion.

The Diagnostic and Statistical Manual of Mental Disorders, the go-to psychiatric illness index, once characterized delusions into two categories: the bizarre and nonbizarre, which were respectively described as impossible and possible but false. “‘I am dead,’ is bizarre,” Marantz writes.”‘Millions of strangers are obsessed with me’ is nonbizarre (and, for Ryan Gosling, nondelusional).” But the DSM-5, the latest version of the book, had to walk back that distinction. As it should have: In a world where the government really does have the capability to broadly and furtively spy on its citizens, it’s suddenly delusional to not think Big Brother is watching. In a world where a tweet can almost instantly be read by millions, becoming famous seems more and more plausible.

So the “Truman Show” syndrome cases are as much a story about the exterior world (culture and technology) as the interior one (the mind). People can deride delusions as complete mental fabrications, but the truth is often more nuanced, a subtle cause-and-effect between a culture and a single person.

With that in mind, hopefully it’s not too much to add another cultural touchstone that sums things up nicely. Author Joseph Heller wrote in Catch-22, “Just because you’re paranoid doesn’t mean they aren’t after you.”