How NASA Found The Lost ExoMars Lander So Quickly

Europe's previous failed lander went missing for over a decade 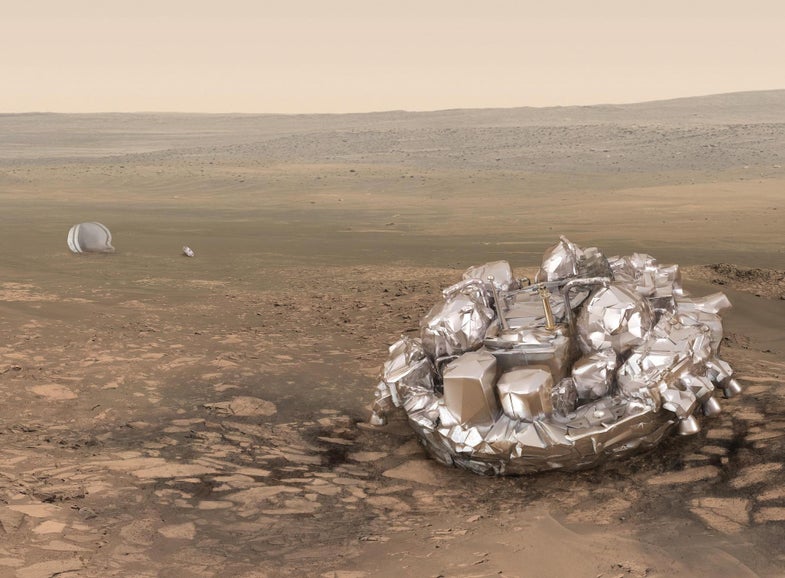 Europe’s Schiaparelli Mars lander did not have had the smooth landing its team had hoped for on October 19, but at least it didn’t stay missing for long. A high-resolution camera onboard a NASA satellite discovered the errant spacecraft’s parachute and other fragments within days of impact. But not all lost Mars landers have been found so quickly—another European spacecraft, Beagle-2, disappeared for more than a decade, from the time of its failed landing in 2003 all the way until 2015.

When it comes to misplaced landers, “The protocol [is] basically ‘find it as fast as we can,’ but how fast that is depends on what information is available to us,” says Alfred McEwen, a planetary geologist at the University of Arizona and the principal investigator for NASA’s High Resolution Imaging Science Experiment (HiRISE), a camera on the satellite that spotted Schiaparelli.

These days, the Mars Reconaissance Orbiter, which HiRISE has hitched a ride on, lets scientists sniff out evidence of a missing lander before the trail goes cold. But other pieces of information—such as where a lander winds up, and how well scientists can track its likely landing site—turn out to be important too.

The Schiaparelli lander in the European Space Agency’s (ESA) ExoMars mission was intended to test out a new landing strategy and investigate the Red Planet’s atmosphere and surface. It almost made it to the ground unscathed. Schiaparelli detached from its mother ship, the Trace Gas Orbiter, shucked its heat shields as planned and deployed its parachute early but successfully. But its rockets, which were meant to fire for 30 seconds, only ignited for a few moments, meaning it came down way too fast. The European Space Agency lost contact with Schiaparelli shortly before it hit the dirt.

A day later, the low-resolution Context Camera on NASA’s Mars Reconnaissance Orbiter spotted the remains of Schiaparelli’s troubled descent. And on October 25, the HiRISE camera captured a closer look at three sites associated with Schiaparelli’s impact: a shallow crater made when the lander plowed into the Martian surface, the front heat-shield, and the parachute and rear heat shield. “In this case, we see the three things we expect to see, they’re distinct, and it’s where we expect to find them,” McEwen says. 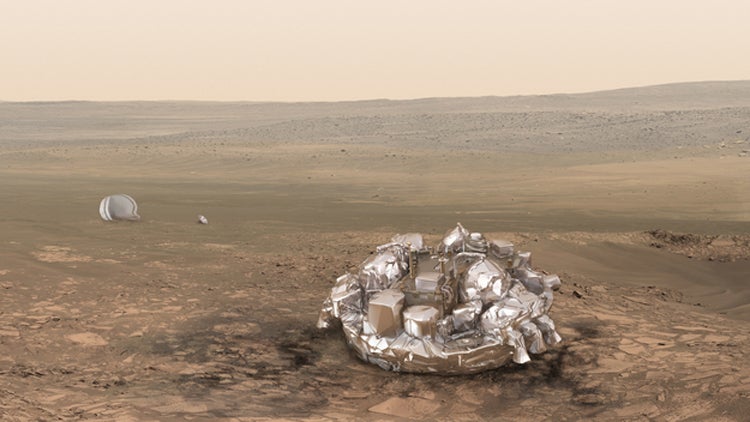 The Schiaparelli lander safe on Mars, in an artist’s impression.

Beagle-2 wasn’t so lucky. ESA lost contact with Beagle-2 in 2003 after it detached from its mother ship, Mars Express. It wasn’t until 2015 that Beagle-2 resurfaced, spied just three miles or so from the center of its expected landing zone by the HiRISE camera. Pictures shot from different angles revealed reflections off its tilted solar panels. “We saw bright spots that changed from image to image, and that was a pretty strong clue that we were looking at something unnaturally flat,” McEwen says.

One reason Beagle-2 stayed out of sight for so long is that the Mars Reconnaissance Orbiter didn’t reach the red planet until 2006. So it couldn’t start to hunt until several years after Beagle-2 vanished. And the older a landing site is, the harder it is to distinguish. Over time, dust settles on the surfaces of a spacecraft, making it less reflective and harder to see in photos. “In the case of Schiaparelli we see this very bright parachute…because it’s so fresh it’s really bright, brighter than anything else you can see on Mars except for polar frost and ice,” McEwan says.

The other key difference between Beagle-2 and Schiaparelli is that the older spacecraft stopped relaying information long before it touched down, making it impossible to track. “Whereas for Schiaparelli, there was information transmitted from it, including its location, all the way down to a point still above the surface, but much closer to where it ended up,” McEwan says. “We knew pretty much exactly where it should have come down, so we were able to target right to that location.”

Beagle-2’s resting place was eventually discovered. Other Mars landers are still missing, such as NASA’s Mars Polar Lander, which was lost in 1999. Seasonal winds compound the dusty cloak worn by landers that disappear in Mars’s arctic regions. “This is a high latitude, and that’s especially hard because the seasonal polar cap deposits dust and just completely wipes out any albedo [reflective] markings every year,” McEwan says.

Even the landing site from NASA’s Phoenix spacecraft, which successfully touched down in Mars’s northern polar region in 2008, would have become unrecognizable if we didn’t know where to look, McEwen says. “Knowing where it is, we could say, ah that little bump is the lander, but we would never be able to distinguish that from a rock if we didn’t already know where it was.”

The new images from Schiaparelli’s collision may help ESA piece together what went wrong, and how to avoid a repeat on future missions. But Schiaparelli’s well-documented landing might also help us find other missing spacecraft. “Maybe seeing what happened here will provide some clues,” McEwen says. “Maybe we should be looking more for shallow craters.”