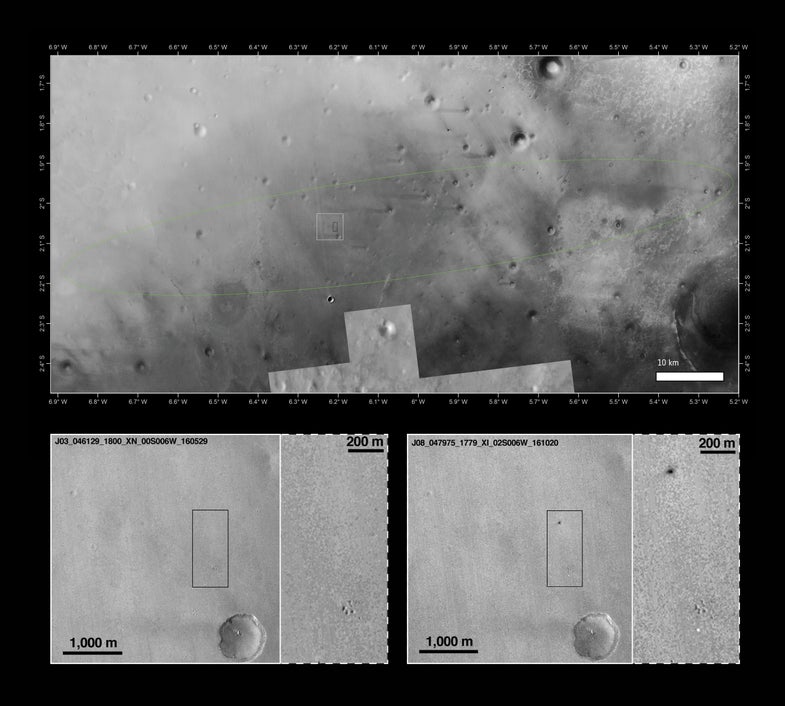 When an object traveling through space encounters a planet, what survives of that encounter usually leaves a mark. This is no less true for meteorites than it is for expensive, carefully calibrated robots. Launched toward Mars by the European Space Agency, the Schiaparelli lander had an ominous, silent descent onto the red planet this week, leaving the world wondering whether it survived the landing.

When NASA’s Mars Reconnaissance Orbiter passed over the landing site yesterday, it found evidence that something, indeed, made it to the surface.

A release from the European Space Agency about the finding is cautious in its language, never spelling out the possibility that the Schiaparelli lander is permanently offline. A small bright patch appears to be the lander’s parachute and heat shield, and a larger dark spot, roughly 50 feet by 130 feet, could be the cloud of Schiaparelli’s impact. Without active thrusters to slow the descent, the ESA estimates that the lander approached the surface of the planet at a speed of over 180 mph. There is only so much careful language that can obscure an assessment like this: “It is also possible that the lander exploded on impact, as its thruster propellant tanks were likely still full.”

Europe’s ExoMars Trace Gas Orbiter made it to its final destination in full working order, unlike its land-bound companion. Scientists will use photos of the crash site and data relayed from the crashing lander to the orbiter to figure out what went wrong in the landing.

If the lander is truly dead, as its scattered parts on the Martian surface seem to indicate, there is still science to do in learning how, exactly, it happened, and how to ensure ESA’s Mars rover, launching in 2020, doesn’t meet the same fate. Science is an iterative process, and for every great leap for humankind, there are several other, less successful hops, and even some tragic fumbles, that we had to learn from first.