The Europa Clipper mission is set to launch in 2024 with a whole host of instruments. 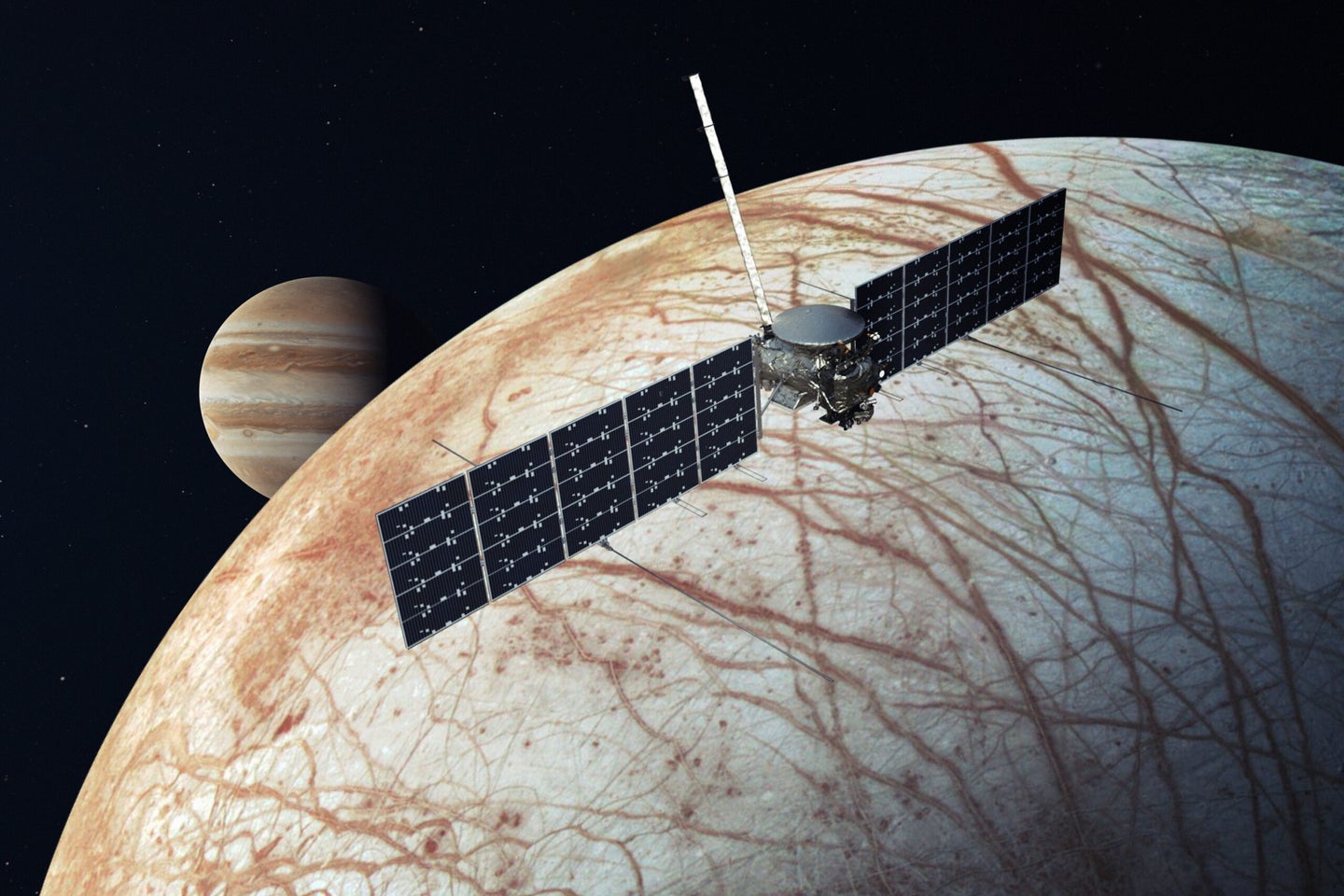 This artist's interpretation shows the Europa Clipper spacecraft, which should be mission-ready by 2024. NASA/JPL-Caltech
SHARE

NASA’s Europa Clipper mission is gearing up to launch in 2024, bound for Jupiter’s icy, fourth-largest moon, Europa. The main goal? To determine whether the Jovian moon hosts the conditions for extraplanetary life. Scientists think a vast liquid ocean, maybe twice the volume of Earth’s, sits under the moon’s frozen, scored, and cracked surface. Europa is as old as the Earth, but its surface appears much younger, which suggests it’s changed over time—and may even still be changing.

Liquid water is a great first sign when looking for a habitable environment, but the Clipper spacecraft will try to determine if the ocean has other chemicals needed to support life, like hydrogen, carbon, or oxygen. Clipper will also simply provide scientists with a closer view.

“We only have about 14 percent of Europa’s surface that’s been imaged at better than 500 meters per pixel, which is not super high resolution,” says Kate Craft, a geophysicist at John Hopkins’ Applied Physics Lab who oversees the different teams working on Europa Clipper. This mission, she says, will do better than 100 meters per pixel and cover at least 30 percent of the moon, and possibly surpass 80 percent.

Europa Clipper will also get more detailed data about Europa’s induced magnetic field and its hidden ocean—for example, how deep and how salty it might be, says Xianzhe Jia, a space physicist at the University of Michigan and the deputy leader of the magnetometer instrument team for the Clipper Mission.

Underneath Europa, Craft says, scientists are pretty confident that there’s an ocean, but Europa Clipper can “really formally confirm that.”

Scientists won’t be able to drill down through the ice anytime soon. In terms of thickness, it could be “somewhere between a few kilometers, and potentially to a few tens of kilometers [thick],” Jia says. But Europa Clipper could give them a chance to study the ocean’s composition from above.

[Related: This microscope could look for life on Jupiter’s moon]

Based on Hubble observations, geysers appear to erupt periodically through Europa’s ice, forming plumes of water that stretch into space. The Clipper spacecraft’s thermal and ultraviolet cameras will be able to look for spots where ocean water may have settled after breaking through the ice, and study the water’s composition to find out if it has any of the chemicals essential for life. It may even catch particles from a geyser plume as it soars through one in space, Craft says. The craft’s radar will be able to figure out if there are underground pockets of water in the ice, which could help determine whether the plumes come from these pockets or an ocean beneath.

Among other instruments on the spacecraft are two cameras that will take in color images of the moon’s surface down to the resolution of a few feet. And a spectrograph—a tool that analyzes the frequencies of light to figure out what materials are made from—will try to determine the composition of the dust floating above Europa’s surface.

Due to the intense radiation near Jupiter, the craft will be in a higher, elliptical orbit around the gas giant and swoop in closer to study the moon via a series of flybys, getting at closest just 16 miles from Europa’s surface.

At the time, they thought Europa was ice all the way down. But “pure ice is a very poor conductor,” Jia says. Water, however, is much better, provided it has some kind of salt or other electrolyte in it.

The spacecraft will take five and a half years to reach Jupiter, and once there will plan to make around 50 flybys of Europa, so it can get a good look at the moon from almost every angle, Craft says. Europa Clipper’s cameras can operate in “stereo,” taking images from slightly different angles to create a 3D model of Europa’s surface, Craft says. Such a map would be useful for a future surface mission to the icy world.

Craft says if we found life on Mars, it would likely be of the same origin as Earth, because the planets are close and exchange so much debris. So she’s especially excited about the prospect of future missions finding life on Europa, because unlike Mars, Europa is far away enough that, “It’s almost a for-sure thing, that that life [there] is a separate origin of life from that on Earth. And I think that just opens the doors for such great possibilities for life everywhere in our universe.”