What if the speed of Earth’s rotation suddenly got faster?

Even a 1 mile per hour speed boost would make things pretty weird. 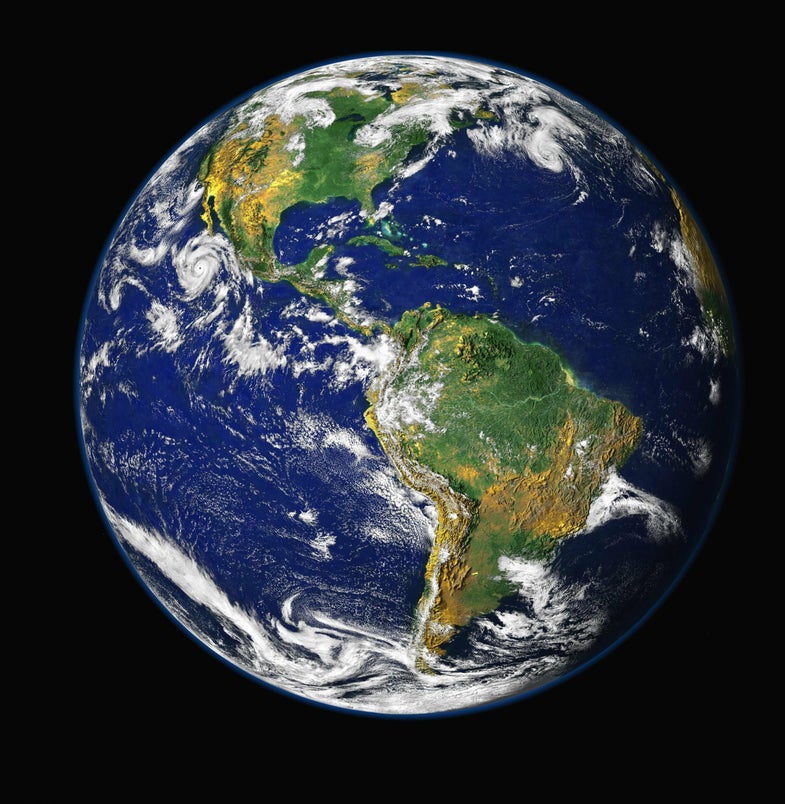 Since the formation of the moon, the rate that Earth spins has been slowing down by about 3.8 mph every 10 million years. NASA
SHARE

This post has been updated. It was originally published on May 17, 2017.

There are enough things in this life to worry about. Like nuclear war, climate change, and whether or not you’re brushing your teeth correctly. The Earth spinning too fast should not be high up on your list, simply because it’s not very likely to happen anytime soon—and if it does, you’ll probably be too dead to worry about it. Nevertheless, we talked to some experts to see how it would all go down.

First, let’s talk about how fast the Earth is moving now. That actually depends on where you are, because the planet spins fastest around its waistline. As Earth twirls around its axis, its circumference is widest at the equator. So a spot on the equator has to travel a lot farther in 24 hours to loop around to its starting position than, say, Chicago, which sits on a narrower cross-section of Earth. To make up for the extra distance, the equator spins at 1,037 mph, whereas Chicago takes a more leisurely (approximately 750 mph) pace.

If we could speed up Earth’s rotation by one mile per hour, the sea level around the equator would rise by a few inches as water migrates there from the poles. “It might take a few years to notice it,” says Witold Fraczek, an analyst at ESRI, a company that makes geographic information system (GIS) software.

What might be much more noticeable is that some of our satellites would be off-track. Satellites set to geosynchronous orbit fly around our planet at a speed that matches the Earth’s rotation, so that they can stay positioned over the same spot all the time. If the planet speeds up by 1 mph, then the satellites will no longer in their proper positions, meaning satellite communications, television broadcasting, and military and intelligence operations could be interrupted, at least temporarily. Some satellites carry fuel and may be able to adjust their positions and speeds accordingly, but others might have to be replaced, and that’s expensive.

[Related: SpaceX’s cheap internet could cost us the night sky]

“These could disturb the life and comfort of some people,” says Fraczek, “but should not be catastrophic to anybody.”

Things would get more catastrophic the faster we spin.

Centrifugal force from the Earth’s spin is constantly trying to fling you off the planet, sort of like a kid on the edge of a fast merry-go-round. For now, gravity is stronger and it keeps you grounded. But if Earth were to spin faster, the centrifugal force would get a boost, says NASA astronomer Sten Odenwald.

Currently, if you weigh about 150 pounds in the Arctic Circle, you might weigh 149 pounds at the equator. That’s because of the extra centrifugal force that’s generated as the equator spins faster combats gravity. Press fast-forward on that, and your weight would drop even further.

Odenwald calculates that eventually, if the equator revved up to 17,641 mph, the centrifugal force would be great enough that you would be essentially weightless. (That is, if you’re still alive. More on that later.)

The faster the Earth spins, the shorter our days would become. With a 1 mph speed increase, the day would only get about a minute and a half shorter and our internal body clocks, which stick to a pretty strict 24-hour schedule, probably wouldn’t notice.

But if we were rotating 100 mph faster than usual, a day would be about 22 hours long. For our bodies, that would be like daylight savings time on boosters. Instead of setting the clocks back by an hour, you’d be setting them back by two hours every single day, without a chance for your body to adjust. And the changing day length would probably mess up plants and animals too.

[Related: What happens when the sun dies?]

But all this is only if Earth speeds up all of a sudden. “If it gradually speeds up over millions of years, we would adapt to deal with that,” says Odenwald.

If Earth’s rotation picked up slowly, it would carry the atmosphere with it—and we wouldn’t necessarily notice a big difference in the day-to-day winds and weather patterns. “Temperature difference is still going to be the main driver of winds,” says Odenwald. However, extreme weather could become more destructive. “Hurricanes will spin faster,” he says, “and there will be more energy in them.”

The reason why goes back to that weird phenomenon we mentioned earlier: the Earth spins faster around the equator.

If the Earth wasn’t spinning at all, winds from the north pole would blow in a straight line to the equator, and vice versa. But because we are spinning, the pathway of the winds gets deflected eastward. This curvature of the winds is called the Coriolis effect, and it’s what gives a hurricane its spin. And if the Earth spun faster, the winds would be deflected further eastward. “That effectively makes the rotation more severe,” says Odenwald.

Extra speed at the equator means the water in the oceans would start to amass there. At 1 mph faster, the water around the equator would get a few inches deeper within just a few days.

At 100 mph faster, the equator would start to drown. “I think the Amazon Basin, Northern Australia, and not to mention the islands in the equatorial region, they would all go under water,” says Fraczek. “How deep underwater, I’m not sure, but I’d estimate about 30 to 65 feet.”

If we double the speed at the equator, so that Earth spins 1,000 miles faster, “it would clearly be a disaster,” says Fraczek. The centrifugal force would pull hundreds of feet of water toward the Earth’s waistline. “Except for the highest mountains, such as Kilimanjaro or the highest summits of the Andes, I think everything in the equatorial region would be covered with water.” That extra water would be pulled out of the polar regions, where centrifugal force is lower, so the Arctic Ocean would be a lot shallower.

Meanwhile, the added centrifugal force from spinning 1,000 mph faster means water at the equator would have an easier time combating gravity. The air would be heavy with moisture in these regions, Fraczek predicts. Shrouded in a dense fog and heavy clouds, these regions might experience constant rain—as if they’d need any more water.

Finally, at about 17,000 miles per hour, the centrifugal force at the equator would match the force of gravity. After that, “we might experience reverse rain,” Fraczek speculates. “Droplets of water could start moving up in the atmosphere.” At that point, the Earth would be spinning more than 17 times faster that it is now, and there probably wouldn’t be many humans left in the equatorial region to marvel at the phenomenon.

“If those few miserable humans would still be alive after most of Earth’s water had been transferred to the atmosphere and beyond, they would clearly want to run out of the equator area as soon as possible,” says Fraczek, “meaning that they should already be at the Polar regions, or at least middle latitudes.”

At very fast speeds—like, about 24,000 mph—and over thousands of years, eventually the Earth’s crust would shift too, flattening out at the poles and bulging around the equator.

“We would have enormous earthquakes,” says Fraczek. “The tectonic plates would move quickly and that would be disastrous to life on the globe.”

Believe it or not, Earth’s speed is constantly fluctuating, says Odenwald. Earthquakes, tsunamis, large air masses, and melting ice sheets can all change the spin rate at the millisecond level. If an earthquake swallows a bit of the ground, reducing the planet’s circumference ever so slightly, it effectively speeds up how quickly Earth completes its rotation. A large air mass can have the opposite effect, slowing our spins a smidgen like an ice skater who leaves her arms out instead of drawing them in.

The Earth’s rotation speed changes over time, too. About 4.4 billion years ago, the moon formed after something huge crashed into Earth. At that time, Odenwald calculates our planet was probably shaped like a flattened football and spinning so rapidly that each day might have been only about four hours long.

“This event dramatically distorted Earth’s shape and almost fragmented Earth completely,” says Odenwald. “Will this ever happen again? We had better hope not!”

Since the formation of the moon, Earth’s spin has been slowing down by about 3.8 mph every 10 million years, mostly due to the moon’s gravitational pull on our planet. So it’s a lot more likely that Earth’s spin will continue to slow down in the future, not speed up.

“There’s no conceivable way that the Earth could spin up so dramatically,” says Odenwald. “To spin faster it would have to be hit just right by the right object, and that would liquify the crust so we’d be dead anyway.”