Huge success after a harrowing journey. 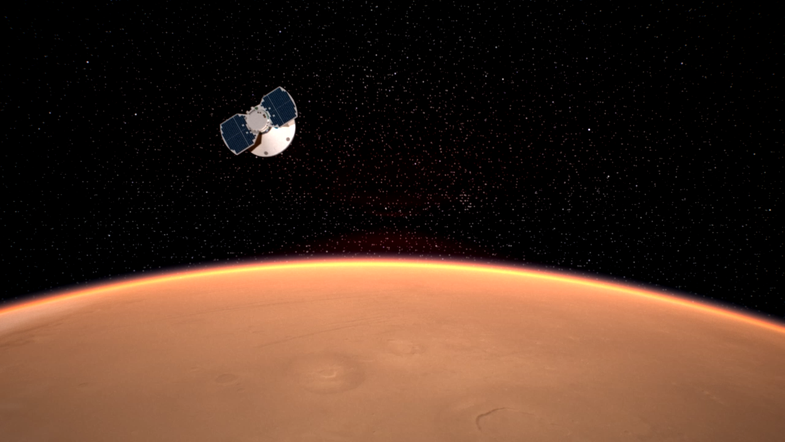 We did it: NASA just landed on Mars again.

The first image back from the InSight lander shows just a few pebbles around the surface—which is very good news. The landing site was chosen for its flat features; to ensure instruments rest evenly, the fewer the rocks the better.

There’s a chance the CubeSats communications system was able to snap a photo of the parachute deployment, but the InSight team is still waiting to see if that attempt was successful. They’re also waiting for the lander’s solar panels to open. Without solar power, the spacecraft cannot run.

At NASA’s post-landing press conference, the International Space Station called and left a message for the InSight team. “We got goosebumps up here,” the astronauts said.

Team members all reported that InSight was doing well. The rock in the foreground of that first image does not pose a threat—InSight has to spend the next few weeks carefully placing its instruments down on the ground around it, so any potential obstructions were cause for concern—and from the photo and dust they can tell the surrounding area is mostly sand, which will be a good thing for the lander’s HPQ drill. The surface operations team is now waiting for the Odyssey orbiter, which will help relay data from InSight back to Earth, to pass by. If they can confirm solar panel deployment, it’s time to start working on setting all of InSight’s tools out onto the Martian surface. But the most harrowing part of this robot’s journey is now complete: the landing was a resounding success. Go InSight!

Stay tuned and read up on this morning’s events below:

Hello from NASA’s Jet Propulsion Laboratory! At approximately 11:54 a.m. Pacific Standard Time (which is just around 3 p.m. for those on the East Coast), NASA’s InSight lander is due to touch down on the surface of Mars. And that means it’s just hours away from enduring the infamous “seven minutes of terror.”

On Sunday afternoon the InSight team successfully completed their sixth trajectory correction maneuver (otherwise known as a TCM) to make sure the spacecraft had its best chance of landing within the targeted zone. While previous robotic visitors to Mars have focused on the red planet’s surface, InSight is designed to investigate our neighboring world’s inner workings.

We will be following along with the lander’s progress all morning, so keep checking this page for real-time updates. You can watch the action for yourself on NASA’s live stream of the event.

For now, the team is in mission control and preparing for atmospheric entry. Good luck InSight!