The jets could play a crucial role in galaxy formation. 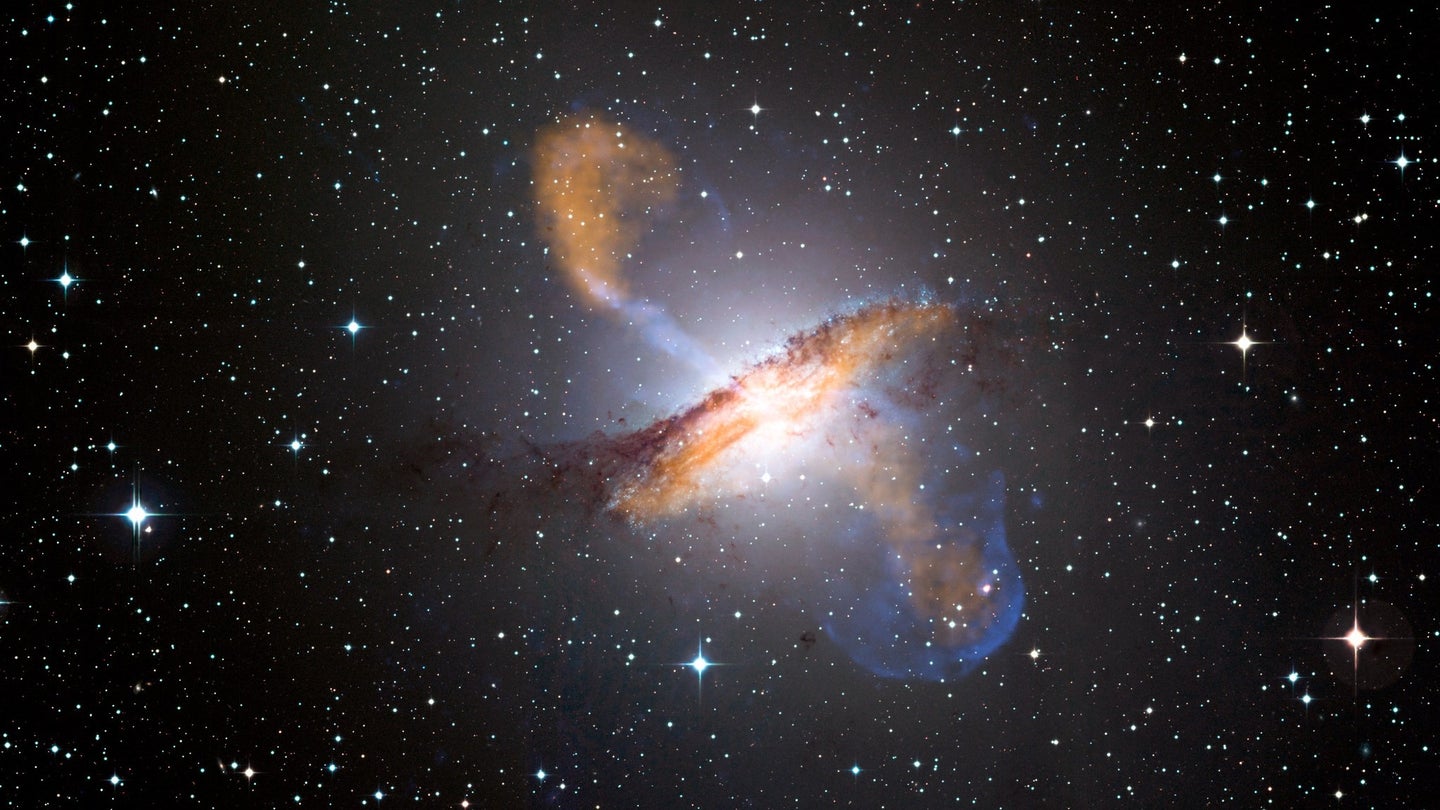 Black holes are so much more than holes that are black. The supermassive ones that lie at the hearts of most galaxies are also fountains of particles that energize vast swaths of their host galaxies with titanic jets of fractured atoms. These gushing objects glow hot in radio waves, posing for astronomical photographers on Earth.

And now astronomers have snapped the crispest picture yet of such jets. Researchers involved with the Event Horizon Telescope (EHT), a globe-spanning network of radio telescopes that managed to take the first ever picture of a black hole’s shadow, have released an image zooming in on the jets of the black hole in the center of a galaxy of the constellation Centaurus. The observation pushes the frontier of black hole astronomy, which could help researchers better understand how the firing of jets plays out across the cosmos.

[Related: Here’s the first-ever direct image of a black hole]

“It is the closest radio galaxy to Earth,” says Michael Janssen, an astronomer at the University of Bonn in Germany and member of the EHT collaboration. If we want to study “an archetypical jet launched by a supermassive black hole, Centaurus A is the ideal candidate.”

The latest payout in a black hole jackpot

EHT coordinates operations between a handful of radio telescopes, including facilities in Antarctica and Spain, so that the array acts as one Earth-sized instrument. When EHT focused its eyes on the sky in 2017, researchers hit the black hole jackpot. Excellent weather furnished the collaboration with data that led to the first black hole image and the first image of a black hole’s magnetic fields—and they’re still picking through the treasure trove of celestial information.

On Monday, a team of primarily EHT researchers dropped their latest snap. For about six hours in 2017, the EHT array fixed its sights on the center of the galaxy Centaurus A, where a black hole 55 million times heavier than our sun shoots jets of electrons and other particles hundreds of thousands of light years long into space.

The EHT couldn’t quite make out the shadow of the black hole itself. Centaurus A sits about four times closer than the galaxy M87, the home of the first black hole to be imaged, but Centaurus A’s black hole is about 100 times smaller than M87’s. Nevertheless, the researchers could see the next best thing: the black hole’s emissions. To most telescopes, jets look like thin, featureless beams of light akin to the beam of a laser pointer. But Earth’s mightiest array managed to resolve structures as small as roughly half a light day—about three times wider than the diameter of Neptune’s orbit.

“To my knowledge,” Janssen says, “this is the first time we see something resolved on less than a light-day scale.” The group published its observation on Monday in Nature Astronomy.

The close-up perspective reveals something of the shape of the jets right at the point where the black hole launches them into the cosmos. While the jet’s center appears almost completely dark, its edges shine brightly. This feature has shown up in other jet studies but never so dramatically. In the case of Centaurus A’s black hole, it hints either that the jets could be empty cones, or that complicated and spiraling magnetic fields create the effect.

Theorists have a lot of questions about how exactly black holes generate such powerful outflows, some of which direct images like this one could help answer. Next the team plans to analyze polarized light from the 2017 data, which would let them see the jet’s magnetic field directly.

From jets to galaxies

Janssen would love to get a good look at the black hole in the midst of all the action, but after calculating exactly what it would take to pull off the feat, he isn’t holding his breath. The main challenge would be seeing through the thick veil of the jets themselves. Extremely high energy light should be able to sufficiently pierce the jets, the group found, but picking it up on Earth would be impossible. If astronomers ever manage to put an array of radio telescopes in orbit around the Earth, and place them at least 5,000 miles apart, however, that apparatus just might do the trick.

“I’m a young astronomer, so I like to dream,” Janssen says. “It will certainly take a long while.”

No concrete plans for such a grand array are in the works, but the young field of black hole astronomy will have plenty to do in the meantime. The EHT continues to observe a handful of objects, including M87’s black hole, our galaxy’s own black hole, and other black hole-related phenomena scattered across the cosmos.

The collaboration hopes to release an image of our local supermassive black hole within a year and will continue to describe new details about its targets with further analysis. The array will also welcome new telescopes over the longer term.

Scrutinizing the behavior of black holes and their jets serves as an important test of Einstein’s theory of general relativity, but is also key to fleshing out our big picture view of the cosmos.

Even the beefiest black holes are relatively small, similar in stature to our solar system. Yet each one plays an outsized role in regulating the behavior of its entire galaxy, with its jets spewing particles over a swath of space a billion times larger than the black hole itself. These jets can churn up gas and dust so much they put a halt to a galaxy’s star formation. For reasons not yet fully understood, supermassive black holes seem fundamental to galactic behavior, and galaxies are the atoms of the universe.